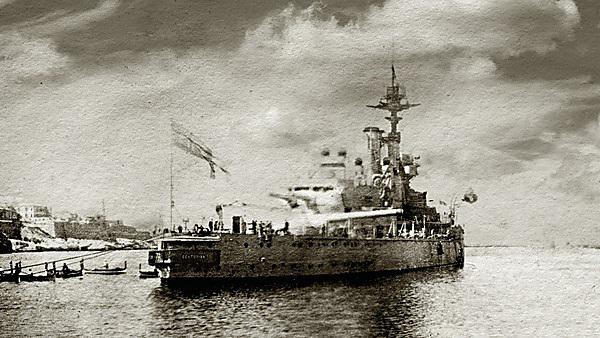 Vintage photograph of HMS Centurion taken in 1923, in Malta harbour. She took part in the Battle of Jutland in the first world war and also took part in world war two.

This module introduces students to the major concepts and themes of maritime history in the era of the First World War. By emphasising the role of sea power, it challenges students to rethink traditional interpretations of this conflict, which have centred on the war on land and especially the Western Front.

‘The First World War at Sea’ offers a different understanding of this period, highlighting the ways in which navies shaped the contours of the war, and explaining the contribution of sea power to Allied victory. In doing so, this module seeks to progress from conventional narratives of the war at sea which provide a narrow focus on the clash between the Royal Navy and the German High Seas Fleet in the North Sea. While this aspect of hostilities remains crucial, this module places it in the broader context of a global war which was underpinned by sea power. It offers a variety of perspectives on the origins of the conflict, how it was fought and its outcome, encouraging a holistic, international approach to the First World War. Students will therefore gain a wider understanding of the role of sea power in the shaping of the twentieth century.

Topics this module covers include: