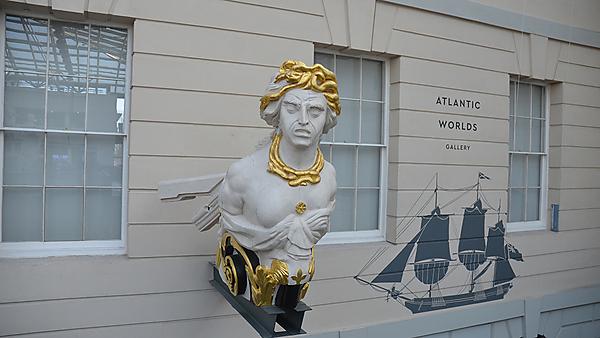 One of the highlights of Plymouth City’s new museum ‘The Box’ will be the fourteen figureheads that will greet visitors as they come in the main entrance. The figureheads were originally on display in Devonport Naval Heritage Centre. They have been carefully moved and restored before going on display in their new home.

There is a long tradition of figureheads on the Royal Navy’s warships. Carved wooden figureheads traditionally adorned the bow of wooden sailing ships.

There is a long tradition of figureheads on the Royal Navy’s warships. Carved figureheads of animals, representing the ship’s name, can be seen on some of Henry VIII’s ships in the ‘Anthony Roll’ from 1546. A unicorn and a salamander are visible on the ships called the Unicorn and the Salamander. The emblem of the Tudors, a rose is also visible on the front of the Mary Rose in the ‘Anthony Roll’. In 2005 divers raising part of the Mary Rose in the Solent found a four foot long carved wooden artefact which has been identified as the ship’s figurehead/badge. It is now on display in the Mary Rose Museum.

Lions commonly featured on the front of naval vessels in the seventeenth-century. Large men-of-war often received more elaborate and expensive decoration and figureheads. The original figurehead for the Sovereign of the Seas launched in 1637 was of King Edgar on horseback. In 1727, the admiralty issued an order that permitted the carving of figures instead of a lion’s head. During the eighteenth-century, figures of people became more common on the Royal Navy’s ships. The carved wooden figureheads usually illustrated the name of the ship. Over time, they evolved into busts by the nineteenth-century.

Figureheads began to fall out of fashion in the 1860s as iron and steel hulls replaced wooden ships. In 1894, the admiralty ended the practice of putting figureheads on larger naval ships. Some smaller vessels continued to have figureheads fitted until around the 1900s. HMS Espeigle was the last Royal Navy ship to have a figurehead when the ship was broken up in 1923. It’s figurehead is now housed at the National Museum of the Royal Navy in Portsmouth. The need remained for a symbol that illustrated the ship’s name remained. Originally, badge design was unregulated. After World War I a uniform style was adopted for different classes of ships.

Carving and painting the figureheads

The Royal Navy dockyards in Plymouth (re-named as Devonport in 1834) and Portsmouth normally employed carvers who worked on the figureheads for ships under construction in that yard. Cuthbert Mattingly worked as the carver in Plymouth from the 1730s to 1760, when he moved to Portsmouth. Other Plymouth based carvers who can be identified include Anthony Allen (1691-1701) and the Dickerson family in the eighteenth and nineteenth century.

The figurehead of ‘King Billy’ – more properly William IV – was made at Devonport by Frederick Dickerson in 1833. The female figurehead for HMS Topaz made by Dickerson at Devonport in 1856 cost £28 10s. The turbaned and bearded bust of HMS Sphinx was designed by Hellyer of Portsmouth for £9 in 1845. The paddle sloop took part in the bombardment of Sevastopol in 1854 and was broken up at Devonport in 1881. Today we associate the figureheads with bright colours but many were originally painted white.

Approximately 200 warship figureheads survive today. Nearly all the surviving examples are from the nineteenth century. The Royal Museums at Greenwich host a database of surviving figureheads including those on display at the Box.

Many were saved when their ship was broken up. The navy removed the figurehead and carved stern from the Implacable before sinking the ship in 1949. As the Duguay-Trouin, the ship fought on the French side at the Battle of Trafalgar in 1805 before being captured and renamed by the Royal Navy. The figurehead and stern are now on display at the National Maritime Museum in Greenwich. The removal of the figurehead and sinking of the Implacable can be seen in this 1949 BBC archive film: https://www.bbc.co.uk/archive/hms-implacable-final-voyage/zbxp2sg 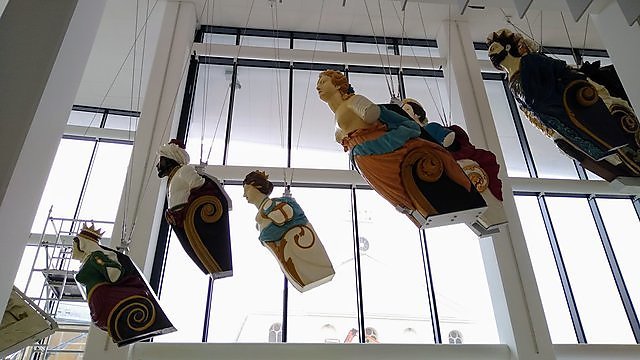 Figureheads on display at The Box, Plymouth 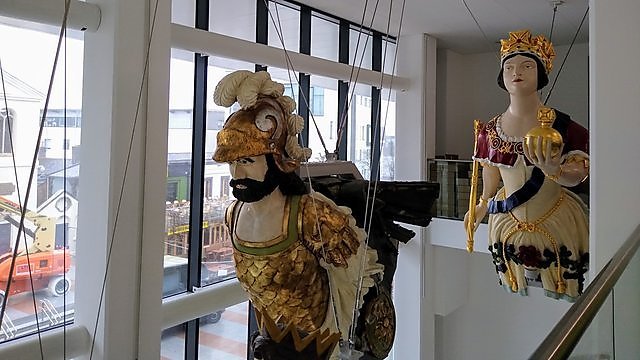