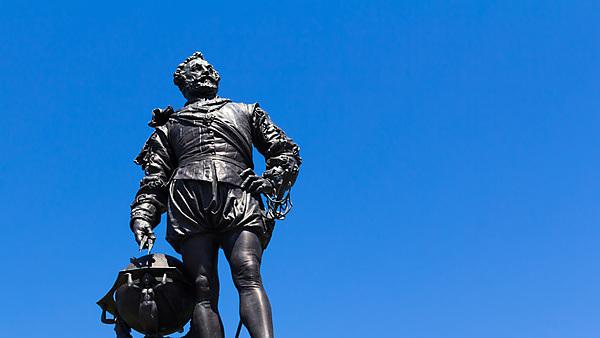 Behind every famous story – from Sir Francis Drake to Winston Churchill – different interpretations of history have always been told.

At any point in time, the narrative around a historic event can change as society changes, sometimes re-shaping how we view our heroes and the lasting impression they left on the world.

Dr Elaine Murphy, the University’s Associate Professor of Maritime and Naval History, explores the legacy behind Tavistock-born, Sir Francis Drake: the first Englishman to circumnavigate the globe. Beloved by Queen Elizabeth I, but nicknamed the dragon by the Spanish, Drake is a divisive figure with a rich history steeped in fact and legend.

Elaine plots a course through the history of piracy from Tudor times to the 'Golden Age' (1650s to 1730s) and examines whether Drake was really more pirate than patriot. Along the way, Elaine showcases her passion for the past and why she believes she has the greatest job in the world – teaching and researching history at Plymouth: the perfect place to study both sides of the story. 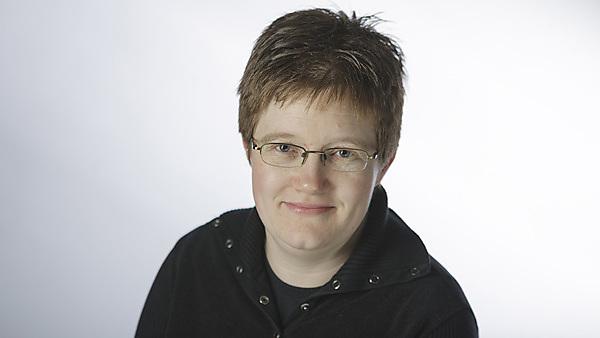 Born in Tavistock, Devon, in Elizabethan times, Francis Drake was a noted seafarer. But as one of the central English commanders who fought against the Spanish Armada, Drake is probably better known as a privateer, or pirate.

From 1577 to 1580, Drake led what became known as his circumnavigation of the globe – the first Englishman to do so – on board his ship, the Golden Hind, which sailed from and returned to Plymouth. Although it was not really a planned circumnavigation, in the sense he was not exploring: Drake’s aim was to raid the Spanish.

Upon his return, Drake brought back a huge amount of treasure and privately met with Queen Elizabeth I and shared the wealth with her.

The Queen knighted Drake on his ship in London and this privateer became Sir Francis, using his share of the loot to buy Buckland Abbey in Devon – now a National Trust property close to Plymouth you can visit.

Drake would later go on to be one of the leading naval commanders against the Spanish Armada, whose aim was to overthrow Queen Elizabeth I. Sailing from Plymouth, Drake led the attack against the Armada with ships that were faster and more manoeuvrable than the larger Spanish galleons.

He later died of dysentery, a common disease in the tropics at the time, while anchored off the coast of Portobelo, Panama in 1596.

The dragon all of Spain feared

If you were an English person in Drake’s day, his achievements were seen as legitimate, especially if you were a beneficiary of his pursuits. While on the other hand, the Spanish who had claimed all of the New World as their territory, nicknamed ‘El Draque’, the dragon.

Piracy really is in the eye of the beholder.

Spain’s territorial claim was a problem for the English, who felt the Spanish should let them in. If you were Spanish, Drake became a feared pirate who robbed them of their riches – with a lot of his exploits taking place before any war had formally broken out with Spain.

Over the course of a number of voyages, Drake attacked many Spanish towns and killed many people. In 1586 he captured Cartagena and demanded a ransom of 100,000 ducats from the townspeople before he and his men would leave. 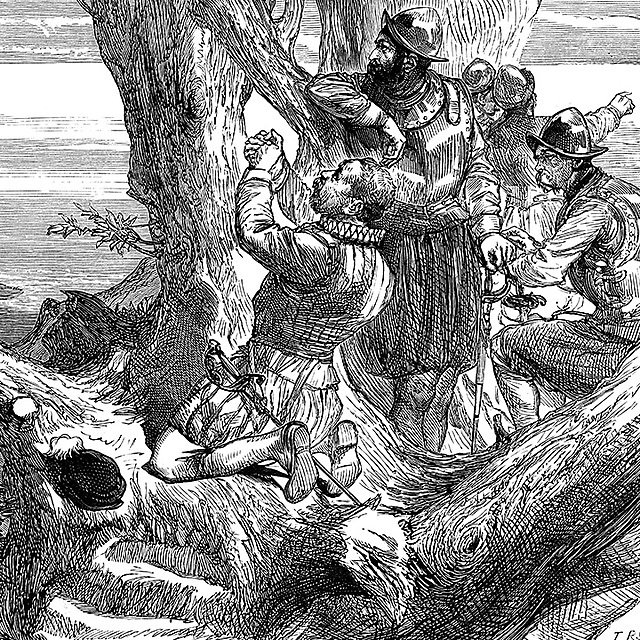 Drake's first view of the Pacific 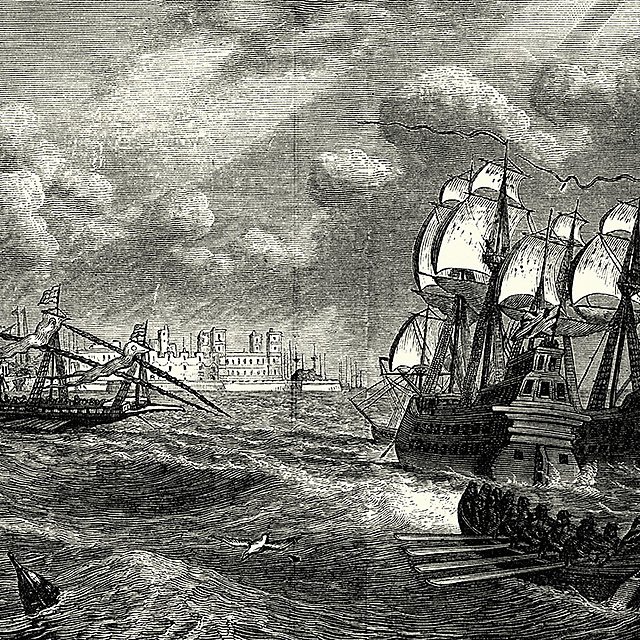 Fighting the Spanish navy at Cadiz 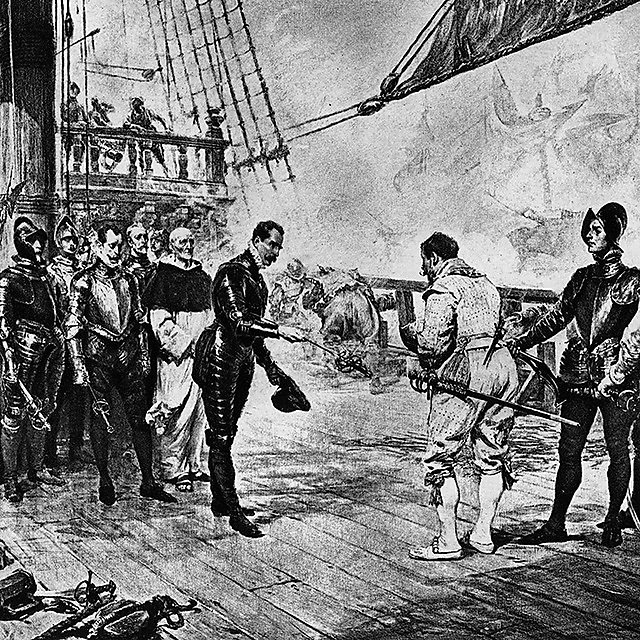 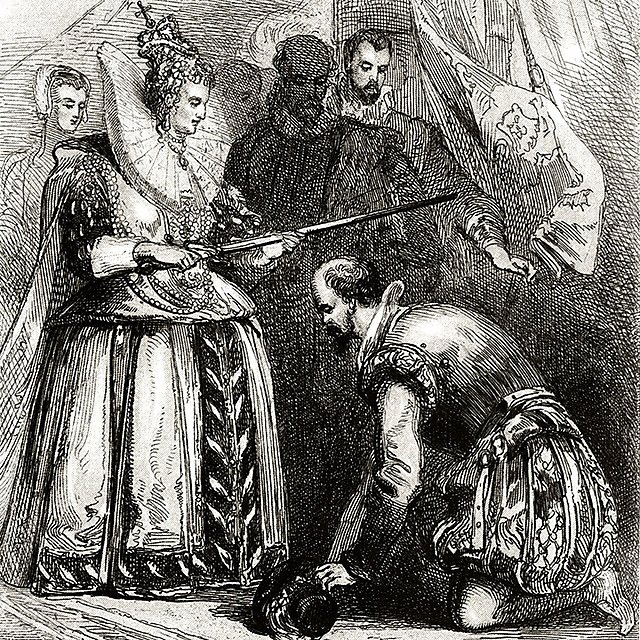 The construction of a hero

Drake has this heroic, very gallant representation, like a lot of men of his time. If you walk down to the Barbican in Plymouth, you can see many plaques celebrating all kinds of voyages – there has always been a heroic element to exploration. An idea echoed in John Seymour Lucas’ painting of ‘The Surrender’, which depicts a chivalrous Drake accepting the surrender of the Spanish fleet.

When we think of Drake depicted in art, the classic image is of him bowling on Plymouth Hoe, which we know now was actually very unlikely to have happened.

‘The Armada in sight, Plymouth hoe’, again by Lucas, shows having just received the news of the Armada’s approach, Drake completing his game of bowls before launching into action.

Whereas the likely reality was the English fleet were forced to wait because of the tide. The Hoe was a big open area with many people walking about, so it was very unlikely an experienced commander like Drake would have stayed to complete a game when he knew the Spanish were approaching. He would have much more likely have been down in the harbour getting his ships ready, knowing they would only have two or three hours until the tide turned.

But the popular story we know sounds too good not to believe, because it makes Drake appear very nonchalant. ‘He will finish his bowls, because he knows he will go on and beat the Armada anyway’.

Drake's privateering ways sometimes got the better of him. During the Armada campaign he left his position in order to capture a struggling Spanish ship, Nuestra Señora del Rosario. Drake's actions put other ships in the English fleet at risk. But he did well as the Rosario was a Spanish pay ship carrying 50,000 ducats. 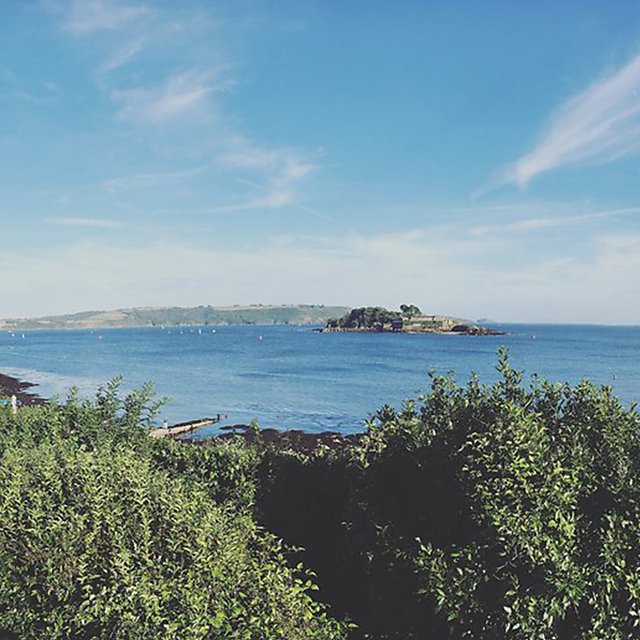 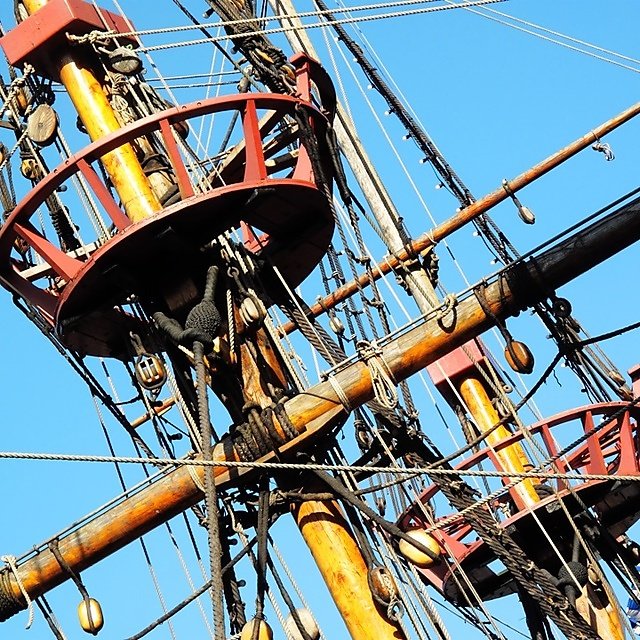 The Golden Hind was the English galleon captained by Drake 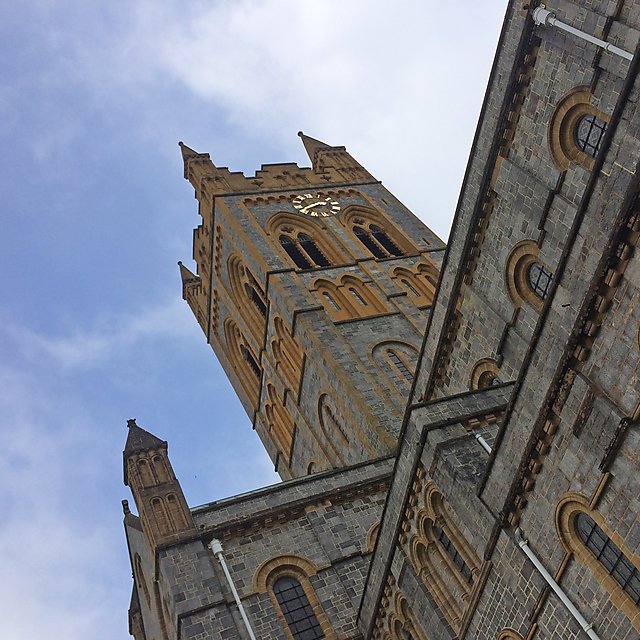 A replica of Drake's drum remains at Buckland Abbey 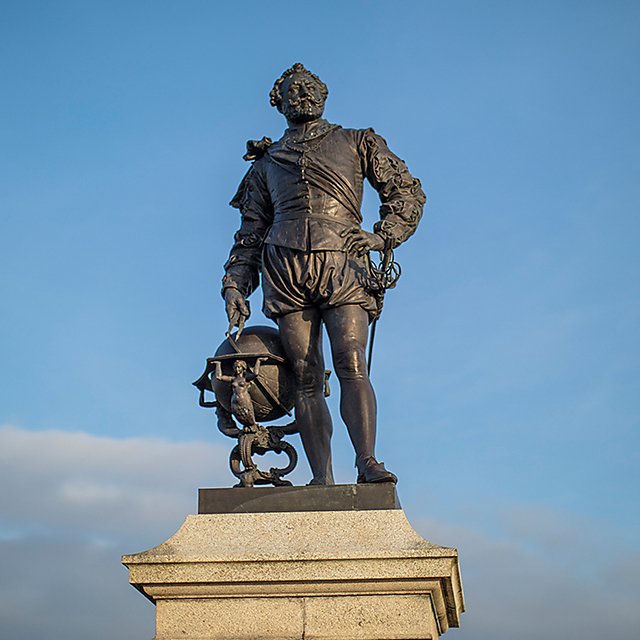 The search for Drake's ghost

Thomas Davidson’s painting of ‘The Burial of Sir Francis Drake’ has helped mythicise his death and burial at sea.

Drake wanted to be buried on land, but when he died in 1596, he was buried in a lead-lined coffin in the Caribbean. Many people are still treasure hunting for Drake’s coffin to this day.

Imagine if we were to find Drake's coffin, what would we find inside? The interest and obsession with Drake isn't going away.

Since his death there have been numerous rumours and local myths about him. Some say Drake made a pact with the devil to defeat the Armada, and that his ghost now rides across Dartmoor in a black coach driven by headless horses, led by goblins and pursued by a pack of dogs – the possible inspiration for Arthur Conan Doyle’s ‘The Hound of the Baskervilles’.

It has also been said that shortly before he died, Drake ordered the snare drum, which he took with him when he circumnavigated the world, to be taken to Buckland Abbey.

Drake vowed that if England was ever in danger and someone was to beat his drum he would return to defend the country. According to legend, the drum can be heard to beat in England’s hour of peril. 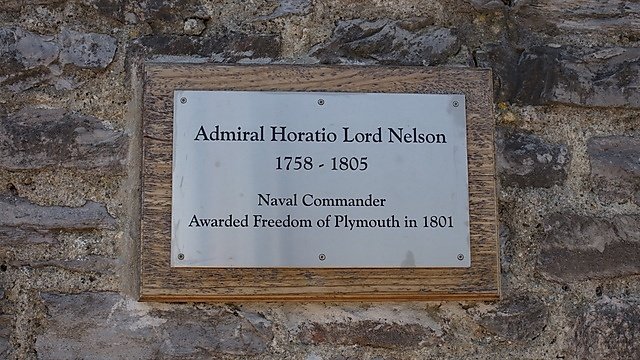 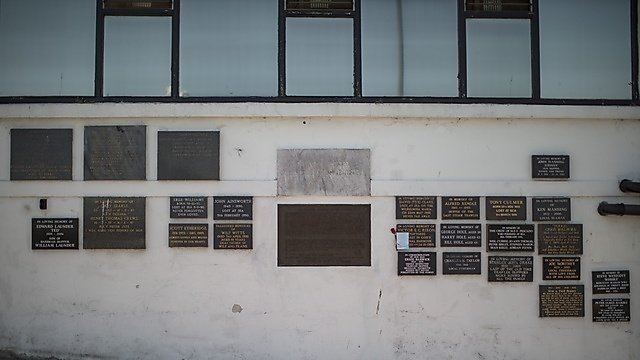 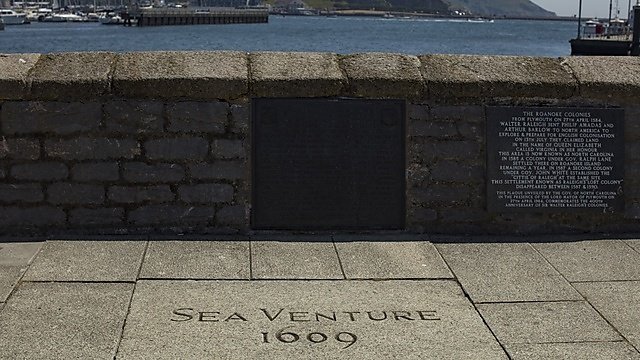 Drake’s legacy is therefore very ambiguous. In a city like Plymouth, we celebrate Drake. Many places are named after him: from Drake's Circus, the shopping centre, to Drake's Kitchen on campus.

When Drake returned from his adventures, Plymouth wanted to ensure he maintained a connection with the city, so they made him mayor for a term in 1581.

Drake was someone up and coming and the fear was he would decamp off to London and never come back. By giving him an important civil office, Plymouth showed him how much the city respected him. Drake later got married in Plymouth and stayed in this region for a lot of his life.

Some years later, Drake took a municipal contract to reconstruct a shallow canal, bringing water to the city. This arrangement has given rise to the myth that Drake brought the first supply of water to Plymouth.

As historians, our views on Drake are much more mixed. Alongside his cousin and fellow Plymouthian, Sir John Hawkins, we cannot look past their involvement in starting the English slave trade to Africa. Between 1562 and 1567 Hawkins and Drake made three voyages to Guinea and Sierra Leone and enslaved between 1,200 and 1,400 Africans.

Historians view Drake with a lot more nuance today. He can be viewed as both a privateer and an admiral.

Figures such as Drake are not simplistic characters; they can be different things, at different points of time, to different people.

How we choose to commemorate

Plymouth chooses to commemorate pirates. But we don’t commemorate Pocahontas who landed here. Why is that?

We don't commemorate Catherine of Aragon, Henry VIII's first wife, who landed here after a terrible storm stopped her original arrival in Southampton – an event which fundamentally changed England through her inability to bear Henry a son, leading to the English Reformation.

We do commemorate the Mayflower, which was only here for four days. While Sir Humphrey Gilbert has a plaque in the Barbican celebrating his voyage to find Newfoundland, but is remembered in Ireland for his massacres and genocides.

Would we put a statue up for Drake today? If someone tried to take down Drake’s existing statue I expect the city would be up in arms.

But if we tried to put a statue up for Sir John Hawkins, then opinion would likely be different. I love the ambiguities of these people and how we see things differently.

The Navy commemorates Trafalgar Day – a celebration of when Horatio Nelson led Britain to victory over a combined French and Spanish fleet in 1805, but one where Nelson was shot and died during the battle – but they don’t commemorate the Battle of the Nile in the same way, which was arguably a more important battle Nelson won. Is this because Nelson died during the Battle of Trafalgar?

This is part of the fun of studying history – unpacking the ambiguities of complex characters like Drake and their actions and trying to find the truths in the tales.