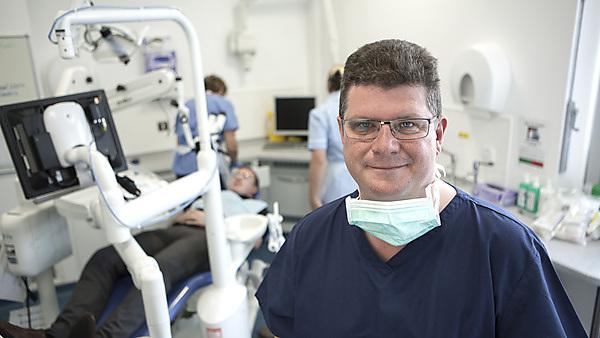 It was the first new dental school to be created in the UK for 40 years: a symbol of a national commitment to increase the number of training places available in the profession.

Now, after a decade of teaching, research, and award-winning community engagement, the University of Plymouth's Peninsula Dental School has become an integral part of the University and a key component of the health and wellbeing landscape for the region.

In that time, the Peninsula Dental School has produced 287 new dentists, many of whom have remained in the South West to build their careers, and treated more than 18,000 people through NHS appointments at the four Dental Education Facilities in Plymouth, Exeter and Truro. And then there are the many community groups, charities, schools and other organisations that have benefitted from working with the students, consultants and support staff of the Peninsula Dental School, on events ranging from tooth-brushing clubs to triage sessions, animated films to advice and counselling.

“Ten years is a significant milestone for us,” says Professor Chris Tredwin, Head of the Peninsula Dental School. “In that time we have been at the cutting edge of new and innovative ways to train the dentists of tomorrow. And the results have been impressive: not only have we produced superb dentists who are empathetic to their patients and fully equipped to excel in the profession, but we’re addressing oral health needs across the South West, and have seen our methods adopted by other dental schools in the UK and further afield.”

The Peninsula Dental School was formally announced on 26 January 2006, and would come to take its place alongside the Peninsula Medical School, at the time jointly run by the Universities of Plymouth and Exeter, in the Peninsula College of Medicine and Dentistry. The first students walked through the door in September 2007, and in early 2008 it opened its first Dental Education Facility (DEF), in Exeter.

“I came to Plymouth University as the inaugural Dean of the Peninsula Dental School in May 2006,” says Professor Elizabeth Kay, Associate Dean of Equality and Inclusion at the University of Plymouth's Faculty of Medicine and Dentistry. “At the time, I said that the post represented an opportunity to put in place a programme that would be radical, reflect modern approaches to teaching, and equip practitioners with the skills and abilities to adapt to rapidly changing professional roles. I am delighted that we have achieved and continue to achieve those objectives.”

The DEFs are where Plymouth students treat NHS patients under the supervision of a qualified dental health professional as part of their studies, and they define the innovative approach taken by the Peninsula Dental School. In 2015, for example, 267 students delivered 88,210 clinical procedures across 20,182 appointments – with some 9,000 patients being treated on average each year. Where treatments are beyond the capabilities of students, they are handled by staff, and these have included periodontology, prosthetics, endodontics, conservation, minor oral surgery, paediatric, and special care.

Our state-of-the-art facilities include a Life Sciences Resource Centre, telematic lecture facilities and a 32 pod Simulated Dental Learning Environment (SDLE). The SDLE enables our students to learn and experience all aspects of providing dental care in a safe, controlled environment, where ‘phantom heads’ allow you to practice and achieve the highest skill levels before treating patients in the clinical environment.

We also have four NHS training clinics providing a substantial service to over 10,000 NHS patients per year. These include state-of-the-art dental equipment, an on-site decontamination unit and a dental technical laboratory. 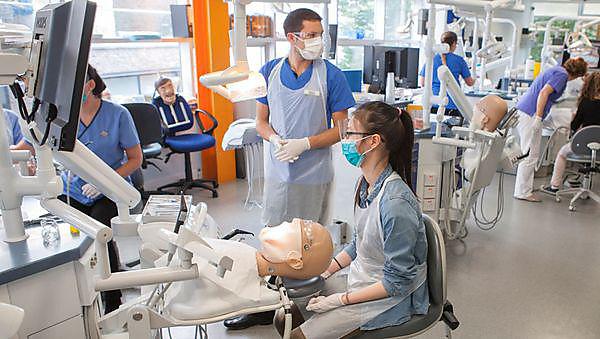 Following the demerging of PCMD in 2012, Plymouth retained control of dentistry within the new Faculty of Medicine and Dentistry, and the following year unveiled the Peninsula Dental Social Enterprise (PDSE) to manage and develop the DEF programme and community engagement activity. This new formalised structure has taken the work to a new level – something recognised in 2014/15 by Green Gown and Guardian University Awards.

From asylum seekers to substance abusers, and adults with learning and physical difficulties to the homeless, the PDSE and the dedicated Community Engagement Team have developed new links to a range of groups and organisations, many of which also engage directly with students thanks to the Inter Professional Engagement (IPE) projects, where teams of undergraduates will work jointly with a group.

With changing patient demographics – an ageing population living with their teeth for longer (something referred to as the ‘heavy metal generation’), combined with other conditions such as dementia – so the nature of treatments needed, and the skills required to perform them, are also altering to reflect them.

Chris says: “This is what awaits the profession in the future, and this is why there is a constant need to innovate the way in which we train the dental professionals of tomorrow while addressing the issue with innovative research – a challenge that is bread and butter to the team here at Peninsula.”

That growing research pedigree includes lab-based projects covering fields such as tooth regeneration, the effect of local anaesthetic on children’s teeth, and the development of treatments for severe gum disease. Research investigating the delivery of dental care and oral health promotion covers issues such as addressing the national problem of poor oral health in children and oral care for those with physical and mental disabilities.

“We are still committed to our founding principles, which are to create empathetic dental professionals fit for the future of the profession, while at the same time identifying and addressing local dental health and care inequalities,” reflects Professor Rob Sneyd, Dean of the Faculty of Medicine and Dentistry. “What’s different between 2006 and now is that, as a result of our success, we are doing more activity based on those principles, which in turn is having an impact on our profession. Whereas at the beginning some eyebrows were raised at our approach, now our methods are being adopted by dental schools across the UK and further afield.”