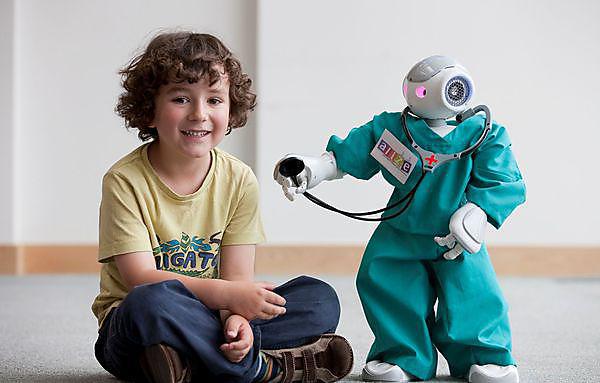 It was a pan-European project that set out to create a more socially-interactive robot, one capable of providing companionship to children in hospitals. Along the way, however, it thrust Plymouth University into the very heart of a continental debate over the ethics of human-robot interaction.

At its launch in 2010, ALIZ-E, a four-and-a-half-year, €8.3 million European Commission-funded project led by Plymouth, considered whether it was possible to develop a robot capable of acting as a companion to a child in hospital. It tasked each of nine partners to use their research strengths, whether it was speech recognition at the National Research Council in Italy, or the development of ‘cloud’ computing techniques in France to power the robots’ intelligence.

It became apparent, however, that technology was simply not ready to realise that vision, with naturalistic, meaningful conversation beyond even the capability of cloud-powered artificial intelligence. But as the project progressed through consultation and focus groups with medical staff at San Raffaele Hospital in Milan, one of the partners, a new direction emerged, one that placed the robot in the role of educator.

The ‘Nao’ robots – each standing around 60 centimetres tall, and costing around £10,000 – began to work with children in San Raffaele, especially those suffering from diabetes. It quickly became apparent that the young patients warmed to the robots as a social presence.

“You could see a tangible social connection, and a response to the robot’s ‘personality’,” said Tony Belpaeme, Professor in Cognitive Systems and Robotics, and academic lead for ALIZE. “We found that in this environment, the child was much more receptive to information, far more so than when it was presented in other formats. It was a brilliant insight for us.”

As word of the trial’s success spread, so other hospitals came on board – three in the Netherlands, two in London, and one in Barcelona. It also led to the forging of close links with patient groups, such as diabetes associations in Italy and the Netherlands, who proved hugely influential in finding families eager to take part in the trials.

A key part of the project saw Tony and the Plymouth team take the robots to schools right across Devon, conducting research on the interaction with pupils, and using the results to update the artificial intelligence algorithms. At the same time, this offered the team the chance to carry out some inspiring outreach work.

Tony said: “I think one of the most profound legacies for us was that we were able to take robotics research out of the laboratory, and conduct it in the ‘natural habitat’, so to speak, of children. We were the first to do that and to insist on doing that.”

ALIZ-E came to a conclusion in 2014, with Plymouth drawing together the research of all partners into a final report. But its legacy effect is likely to go on being felt in a number of areas for many years to come. For example, the EC has now funded a new project called DREAM, which will use the Nao robots in research with autistic children.

In many cases where a child has diabetes, you notice their confidence has been knocked and the robot can help restore that. The robots can support and educate, and we have seen many times the positive impact this is having on children and their families

Professor Tony Belpaeme's work is based around humanoid robots

But perhaps even more profound has been the headway the team has made in terms of human-robot interaction, one that could be applied to hospitals, schools and learning environments, and homes in the community.

“The European Commission warned us at the outset that this might be a ‘GM moment’ for robotics," Tony said "There was no such debate being had in the United States or Japan, and the EC felt that any adverse reaction from the public could have a detrimental effect upon Europe’s competitiveness. This wasn’t a new drug we were testing, where staff could very quickly grasp the concept. This was entirely new ground, and we had to overcome a number of preconceptions about robots among the medics and staff before we won their trust. Whether it was establishing that the robots did not pose an electrical interference risk, to defining what was permitted in terms of physical interaction, we broke new ground with this project, and we’ve paved the way for similar research in other fields.”

See how 'Nao' can help children deal with diabetes

Each standing around 60 centimetres tall, the robots are equipped with specially designed speech recognition software through which they can interact with a child and deliver personalised responses

The centre builds on world-leading excellence in computer science, robotics and neural systems research. Staff at the centre coordinate large projects and collaborate with major international centres in cognitive robotics and computational neuroscience.