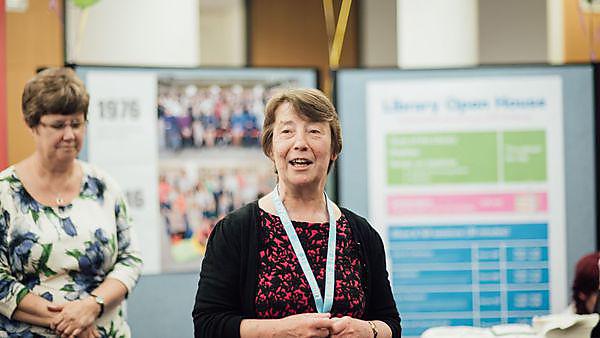 “Not so much a library… more a way of learning” proclaims the 1977-vintage pamphlet on the then newly opened Learning Resource Centre (LRC). Forty years on, it’s a marketing soundbite that has remained truer to the ethos of the facility than perhaps its author could ever have envisaged.

“It’s always absolutely packed,” says Jane Gosling, Head of Library and Digital Support, who’s been part of the fabric for 36 of those 40 years. “Even though students have their own laptops, you still find them using the computers here, and that is because this is ‘their office’. They might live 200 yards away in the Mary Newman Building, but this is where they like to work.”

“And it’s a social learning space – they can bring drinks and cold food, use their phones,” adds Kate Esmer, Information Services Coordinator. “That might seem a far cry from the rules of a traditional library, but we’ve made these changes because that is what students are telling us they want, not because it makes it any easier for us!”

The institution’s original library was located inside the Link Building, but with the establishment of Plymouth Polytechnic in 1970, the need for a dedicated building became steadily more urgent. And in 1976, at a cost of £830,000, the first major campus capital development of the LRC and Students’ Union was completed, and opened by the Duke of Edinburgh. At that stage, the library housed 70,000 books, but as the polytechnic expanded to incorporate three other sites (Rolle, Seale-Hayne and Exeter), so that figure rose to 500,000.

“We ran the other libraries with the same ethos, and implemented the same technology – it was a huge operation,” says Jane. “We had a shuttle service to transfer books between the sites. When the campuses closed, we brought everything to Plymouth, building the extension while at the same time maintaining the service for students.”

That £7 million extension – formally opened in January 2005 – increased the library’s footprint by 60 per cent and enabled it to make fundamental changes to the learning environment. There are now 350,000 books and an average daily footfall of 5,000 people (one million per year), who come for a much wider range of services such as large-format printing and print finishing services, the SUM:UP mathematics drop-in centre, and the open-access computing area.

“It seems funny to think that when we first mooted a 24/7 computer facility that would be unsupervised overnight, there were concerns that either the machines would be damaged, or someone would drive up with a lorry and take the lot,” says Kate. “But that has been the way of many of the changes we’ve made, and they’ve all worked!”

Those changes have often revolved around the ethos of ‘self-service’ – such as when, after much debate, the decision was taken in the mid-1980s to take the computer reference system used by staff and ‘turn it around’ to face the students so they could see for themselves whether the book they wanted was available or on loan. And then there was the scrapping of fines in 2013 (for all but a few exceptional instances), a change in approach that has subsequently been adopted by a number of other institutions.

Jane says: “Changes might not always be straightforward to implement, but having taken the chance, they’ve all worked. Call it a ‘what if’ or ‘can do’ approach, it’s been a consistent theme across the 40 years. The service has been innovative from the word ‘go’.”

Further evidence of that forward thinking, and the positioning of the library as a learning resource centre, came in 2011–12 when the team began to provide a staffed service 24 hours a day, 365 days a year – even Christmas Day – a change that is still one of the most positively commented upon aspects of university life in student surveys.

And then there are the technological advancements that the library has accommodated, such as the innovative e-Textbooks project, or the integration of the library’s Primo catalogue into the Digital Learning Environment, enabling students to search for books, journals and electronic resources on the move.

Kate added: “It is ironic that, at a time when we’re celebrating 40 years of the building, one of the things we do is use our technology so that people do not have to step foot inside the library if they don’t want to. All of our books can be requested online, and where that book or journal or report is electronic, we can even deliver it to your tablet or phone, wherever you are.”

Plenty of people did step foot in the library, however, on 6 June for the 40th birthday celebrations. There were tours running all day, with some show-and-tell sessions including an introduction to the Special Collections, recent advancements such as e-textbooks, and the way the library supports research in the institution. And it wouldn’t have been a birthday without some cake.

Professor Pauline Kneale, Pro Vice-Chancellor for Teaching and Learning, paid tribute to the staff – and to Jane, who retires later this year – for their work. She said: “The library is an innovative learning space that has served the University very well over the years and has moved with – indeed ahead of – the times. And its popularity with students is testament to the way the staff support them: even through the night on Christmas Day they are here, which is remarkable.” 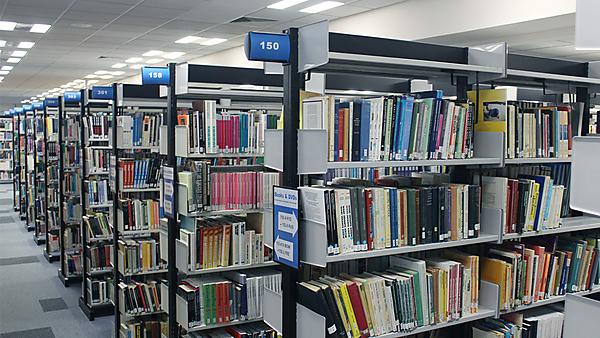 A year in statistics 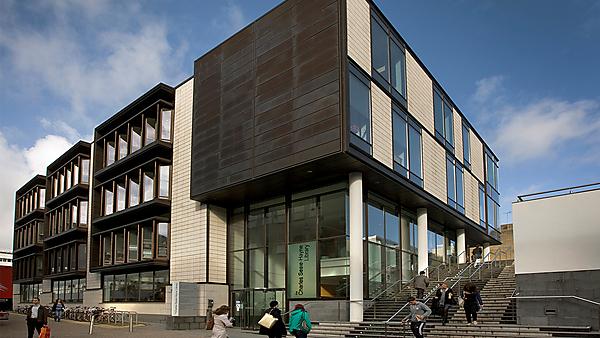 The Charles Seale-Hayne Library is situated at the heart of the campus offering the resources you need throughout your time at the University.

The old main entrance before the extension was built