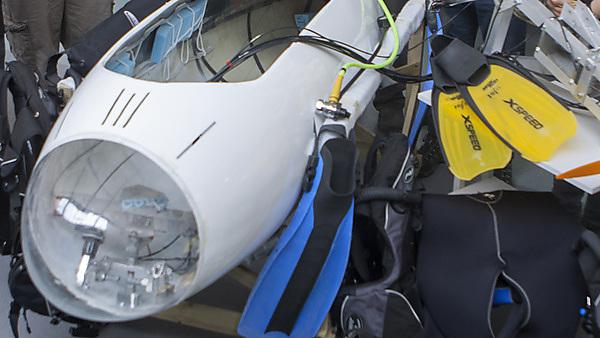 “It’s a confined space and a strange experience,” says Doug Megran, a final-year mechanical engineering student, when asked to describe what it’s like to pilot the Mayflower. On the screen next to him runs a silent video of the sub being tested in the Plymouth Life Centre, with Doug diving down and jimmying his way into the hull. As the door is sealed, you could be forgiven for giving a little shiver. “I mean, scuba diving itself can feel a little weird, but when they close the hatch and you’re lying there in the sub…it’s not for the claustrophobic!”

A little under nine feet in length, and constructed from woven cloth, epoxy resin and carbon fibre, the Mayflower clearly hasn't been built with comfort in mind. But that it’s been built at all is testament to the vision and skill of the staff–student team behind PULSE – the Plymouth University Legpowered Submarine Engineering.

The project originated with Dr Keri Collins, who joined the University in 2012 as a Research Fellow. A graduate from the University of Bath, she’d seen the way her Alma Mater had integrated it into its programme and wanted to do the same at Plymouth.

“We have this great marine tradition at the University, and there’s the naval dockyard in the city, so it just made sense on a thematic level,” says Keri. “But initially it was difficult to show people what we were trying to do, and at the outset we couldn't even be sure we’d have the funding to do it. So it wasn't an easy ‘sell’ to the students.”

But sell the idea Keri did, and at the beginning of the 2013/14 academic year a team with “zero experience” embarked on the project. The submarine was designed through dissertation projects and it was that first version that Doug, dive lead Daryl Oosthuizen, Mike Prest and Matthew Merrett took to the European International Submarine Races at Europe’s largest freshwater tank, QinetiQ’s Ocean Basin in Gosport. There, they achieved a remarkable third place overall around a demanding slalom course, reaching speeds of 4.6 knots despite effectively losing their hatch early on.

With students John Cima, Oliver Powlesland and Nicholas Arthur joining the project at the start of 2014/15, and the support of staff in the School of Marine Science and Engineering, including Dr Richard Cullen, Adam Kyte, Alastair Reynolds and Matt Brown, the focus switched to refinement and improvement for the International Submarine Races (ISR 13). Held biennially at the Naval Surface Warfare Center (NSWC), in Carderock, Maryland, the event places an even greater emphasis on speed, requiring the teams to make a straight run down a 100-metre course – in a facility so long that the designers had to take into account the curvature of the earth.

Daryl, who is on the masters programme in Mechanical Engineering, said: “This year, we made a number of modifications to the design, addressing the hatch problems, adding a new nose cone, modifying the control system and making the sub more rigid. These have all been designed to improve the hydrodynamic performance and reduce drag.”

It’s more than just allowing students to race submarines. It’s a chance to guide them through the whole engineering process and to help them to learn some very important lessons about co-operation, design and project planning 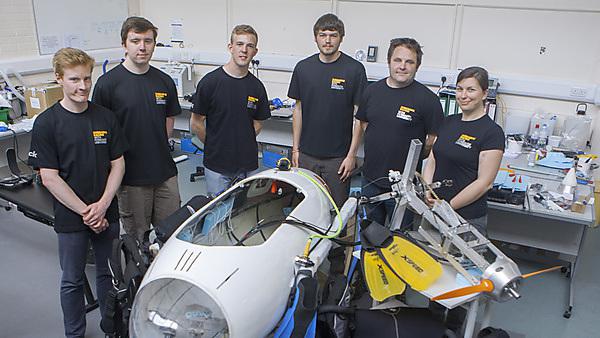 With the aim of improving the speed by 25%, the team introduced a new propeller system, switching from a contra-rotating design to a single set, which in itself necessitated changes to the control system to counter the torque roll caused. The team flew out in late June, joining 24 others from seven countries, and having passed both the dry and wet inspections, they were all set for testing. And then, like the downbeat middle section of a sports biopic, came the setbacks.

“We crashed on our first run, and unfortunately that was the story of the competition,” says Keri. “The sub proved very difficult for Doug to control – our rudders were too good if anything. Some of the other teams had used static fins, which give you greater stability and I think that was something that we were missing.”

On the PULSE team’s one completed run, the Mayflower had started well, reaching an estimated 3.6 knots as it approached the video time gate. But as it drew near, it rose through the water and passed over the top of the gate, and so, upon finishing the course, failed to register a time.

It wasn't all bad news though – the team was commended by the organisers for its design report, and its UK record remained intact as many of the other UK entrants also experienced technical difficulties.

“It was disappointing, but we shouldn't lose sight of the progress we've made,” says Keri. “The skills gained and the contacts forged with local businesses like Babcock and GMD Eurotool, whose experienced engineers have helped us to develop our submarine, have all been hugely positive. We were also very grateful for the financial backing and sponsorship from Research & Innovation, the Plymouth Fund, Santander Universities Scholarships, MSubs, the joint IMarEST/RINA branch, and our school.”

With all bar Nick Arthur graduating, the PULSE team is facing up to an autumn of transition. But the waves made by its founding members have set it on course to become a valuable extra-curricular activity.

Keri adds: “It’s more than just allowing students to race submarines. It’s a chance to guide them through the whole engineering process and to help them to learn some very important lessons about co-operation, design and project planning.”