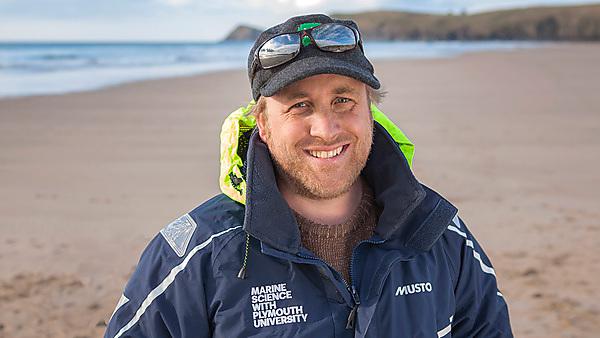 Tim Scott traces the outline of an old surfing scar that jags around his left eyebrow and shivers into the edge of his cheek. It’s been barely perceptible up until this moment, but now, standing in an equipment store on the Plymouth University campus, the harsh overhead lighting illuminates its path.

“It’s a shallow life that doesn’t give a person a few scars” remarked American storyteller Garrison Keillor once upon a time. Tim’s portrait is testament to that.

But where to start with the story of the young scientist, whose years have been spent almost completely in dialogue with water? Is it with art, perhaps, and his eye for the aesthetics of the ocean, which he has expressed in abstract painting, sculpture and photography?

Maybe it’s Tim’s upbringing in Devon and the feeling that from the day of his birth, when he was given a pair of tiny kayak paddles, he’s been anointed into this life aquatic of his?

Or is it the science and the way his passion for surfing has given him an innate understanding of the forces that shape our beaches – and which occasionally lead swimmers into danger?

It is a confluence that has swirled Tim towards research and learning, leaving behind a lucrative career in the off-shore sector in Mexico, with all its international surfing fringe benefits.

“The sea is a constant and it is endlessly fascinating,” he says. “The coast has the same draw, it is raw geology, raw process, wiped clean every day by the sweep of the tide….the sand bars are new every tide, the beach is new every tide. It is a complex response to different environmental conditions.”

That we’re standing in the store, surrounded by racks containing cables, ropes and scaffolding; surfboards, boots, and buoys, is due to an international research project into those very environmental conditions. Working alongside RNLI lifeguards at Perranporth beach in Cornwall, Tim has been using advanced GPS technology and lo-fi improvised devices to develop an understanding of the causation and behaviour of rip currents. Their findings promise to transform beach management across the country, through the development of a predictive model that will power a Met Office-backed early warning system.

A surfer since the age of three, Tim knows first-hand the dangers that rip currents can pose to the inexperienced. It was he, after all, who saved three rookies off Rossnowlagh in Donegal Bay in 2010 as they were being sucked out to sea.

“As surfers, we sit surrounded by waves for hours on end, waiting, observing, feeling the changing conditions,” he says. “We’re like human drifters. And that’s why when I study the data from this project, I look for patterns, those rhythms of nature, and you know instinctively whether they’re ‘real’ or not.”

Rip current flow or rip current hazard is driven and controlled by a number of different environmental factors. The standard advice really, which is always the best recommendation, is to always try and swim at a lifeguarded beach.

We are based in the School of Biological and Marine Sciences at the University of Plymouth, in the South West, UK, and aim to provide a first-class data collection, analysis and modelling service to help address important issues in the coastal and marine environment.

We strive to understand and predict the behaviour of coastal, marine and estuarine systems to support the appropriate management of resources and activities in these environments.