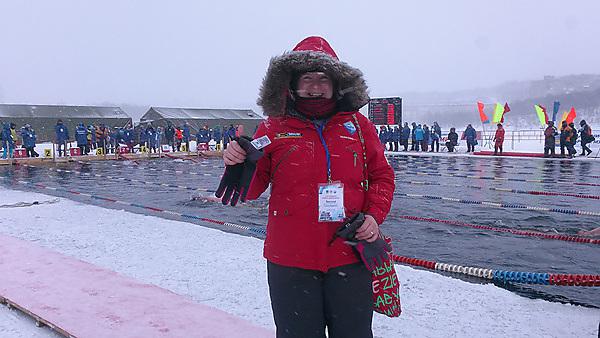 It’s Murmansk, Russia, and the April air temperature is below freezing. More pertinently, the water into which you are about to step is at freezing point – and you’re going to be spending the next 20 minutes or so swimming in nothing more than a bathing suit. You raise the flag of your native country above your head, and the crowd go wild. How do you feel?

“Absolutely terrified,” says Annette Daly, Careers Adviser at the University, and gold medallist for Zimbabwe at the 2015 World Ice Swimming Championship. “I thought to myself, ‘What on earth am I doing here? This is really going to hurt’. Just talking about it now is giving me butterflies.”

For Annette, it was the pinnacle of a remarkable adventure – one that saw her transported to the realms of superstardom for five days. Now, back on campus with her feet firmly on dry land, the story unfolds equal parts bravery, eccentricity…shivery.

“It all began when I became member of the Devon and Cornwall Wild Swimming group,” she says. “Through the club, I discovered a group of like-minded people who enjoy swimming in cold water. There’s something about swimming in really cold water – it’s the mental challenge for sure, but you also get this tremendous endorphin rush afterwards. I've always enjoyed it.”

Training at a quarry lake on Bodmin Moor, Annette completed her first ice mile in 2014, becoming the 74th person to achieve the feat. Despite enjoying the experience, a back injury took her out of the water for a number of months, and it was only when she applied to take part in the World Championships – and was accepted to represent Zimbabwe – that things really began to happen.

“I’d been off work and having physio on my back and the combination of the exercise and the cold water really helped me get back to work,” Annette says. “I did a couple of swims, including one at Lake Windermere, and began to regain my fitness. With ice swimming, it’s not something you can do on your own – you need a lot of support, like medical teams around you in case you get into difficulties.” 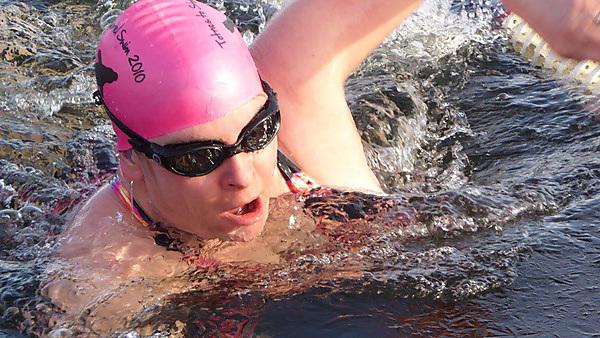 There’s something about swimming in really cold water – it’s the mental challenge for sure, but you also get this tremendous endorphin rush afterwards.

For an ice mile to be officially ratified, the water has to be below 5º Celsius in three separate readings, and must be videoed and ratified by observers. Simply finding water that is cold enough can be a challenge in the UK, and meant Annette had to find some truly novel ways to acclimatise.

She says: “Apart from my pool training, I would swim once a week at the quarry in Cornwall. One day we turned up to find it had frozen, so we cut a hole in the ice and sat in the water! And then an engineer friend took a fresh water tub, of the type you find on building sites, and modified it for me. I filled it with water, and I would sit in there every day before work. I started at five minutes and by the end I was in there for 20. It was torture.”

Annette completed her second ice mile at the Lough Dan Invitational Ice Mile in Ireland in February, braving 3.8º water, and then set off for the combined World Ice Swimming Championships and Russian Open Water Swimming Championships in March. Touching down with competitors from 15 nations, she found herself greeted at the tiny airport by media, personal translators, regional dignitaries, and the warmth of a hugely excited local population.

“Ice swimmers are viewed as celebrities in Russia, so we had television reporters and photographers swarming all over us before we’d even grabbed our bags,” she says. “And I've never signed autographs before!”

Just 24 hours later, she was led out for her ‘heat’ in a pool that had been carved by chainsaw out of the ice of Lake Semenovskoe.

“You have to mentally prepare yourself for that initial shock when you first get in the water,” she says. “I concentrate on my breathing – you have to control it otherwise your body can quickly slip into difficulty. First, you get pins and needles all over and then numbness through your hands and feet. Next, the muscles start to contract and your stroke essentially begins to shorten. The water in Russia was the coldest I have known – it was like swimming through a slush puppy. I could feel the ice crystals forming.”

Annette took 21 minutes to swim the one-kilometre course – securing a gold medal for her age category as a result. Over the next two days, at the same venue, she took part in four sprints and finally a 450m race in which she won a bronze medal. She describes this as the hardest race of the competition as she had not yet recovered from the previous five races. Plenty of others didn't even get that far – thorough medicals before each event saw some athletes refused permission to compete, while ‘seconders’ watched each competitor closely for signs of fatigue, with some forced to retire, even with mere metres remaining.

“On each occasion, I was assisted from the pool by a couple of burly Russians, and taken to the medical tent, where they gradually and quite expertly warmed you – it was worth it for all the hot towels they wrapped you in,” she says. “They looked after the competitors incredibly well.”

Annette is keen to repeat the experience at the 2017 World Championships in Germany, and with ice swimming potentially becoming a Winter Olympic sport, the possibility of representing Zimbabwe on the coldest, grandest stage is not beyond the realms of possibility. Mother, careers adviser, torch-bearer?

“We’ll see what the future holds,” she adds. “All I know is that I’m doing the Plymouth Breakwater Swim next, and it will be an awful lot warmer!”