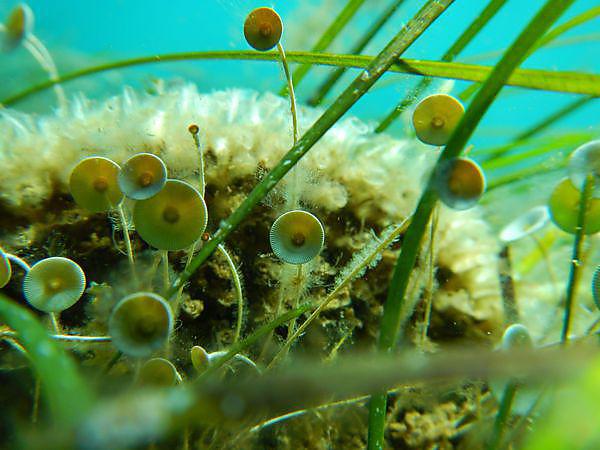 Ocean acidification can weaken algal skeletons and cause loss of marine biodiversity, say scientists in a new research paper published this week.

Even a small loss of skeletal calcification, caused by exposure to corrosive waters, can have a significant impact upon the strength of marine skeletons and leave algae at risk of losing access to light and nutrients.

Based upon a study in which they used volcanic vents in the Mediterranean as a natural analogue for ocean acidification, the paper Ocean acidification bends the Mermaid’s wineglass is the cover story of the new edition of the Royal Society’s Biology Letters.

One of the authors, Professor Jason Hall-Spencer, from Plymouth University’s School of Biological and Marine Sciences, and its Marine Institute, said:

“Based upon current forecasts, many calcified organisms will be corroded by acidified waters by the end of the century. What this study shows is that a dramatic weakening of algal skeletal strength can have implications for performance, which in turn could transform an entire ecosystem.”

Three sites of high, medium and low CO2 were surveyed by snorkel for evidence of the presence and appearance of the green algae Acetabularia acetabulum, also known as ‘mermaid’s wineglass’.

All surveys revealed that the algae ranged in appearance from those with bright white cups at the low CO2 site to green cups at the high site, and no calcified algae were present in the region nearest the volcanic seeps. When specimens were scanned under electron microscope, it was revealed that those from areas of low CO2 had an intact sheath of aragonite that supported the stem, while those in acidic waters had had theirs eroded and pitted, and were up to 32 per cent less calcified.

Further tests were conducted on samples, using static cantilever beam theory, with the base of the alga clamped between two horizontal glass slides, suspending the hydrated stem and cup in air. A weight was then hung from the stem to exert force and test its flexural stiffness and ability to resist the load.

It revealed that the stems from those specimens collected from the high CO2 site were up to 40 per cent less stiff and 40 per cent droopier – raising important questions about the impact upon their performance as a result. And the scientists say the relationship between calcification and material stiffness was exponential, not linear; so even relatively small reductions in calcification led to a disproportionate drop in the ability of the material to resist a load.

“Although calcifying organisms can tolerate high CO2 conditions, even subtle changes in calcification can cause dramatic changes in skeletal performance, which may in turn affect key biotic and abiotic interactions,”

“A less rigid stem droops towards the seafloor likely reducing the distance spores can travel away from the cup. The cup is also photosynthetic, so bending may reorient it away from incident light and increase shading by neighbours, thereby reducing the scope for growth. But there are also potential benefits to being less stiff. A more flexible stem allows the alga to reorient in flow, reducing drag and the likelihood of dislodgement, and may aid in gas exchange as the stem moves back and forth like a pendulum.”

Professor Laura Newcomb, of the University of Washington, added:

“This study underscores the fact that some organisms may survive ongoing ocean acidification despite reduced calcification; this facultative calcification may explain why certain calcified organisms reappear in the fossil record after mass extinctions associated with periods of high atmospheric CO2. Many ocean acidification studies show reduced calcification at high CO2, but do not examine the consequences for organismal performance. Our ecomaterial approach establishes these linkages between calcification and performance (and ultimately fitness) which are vital for long-term predictions of how organisms will fare in a high CO2 world.”

A video of the research team in action on YouTube