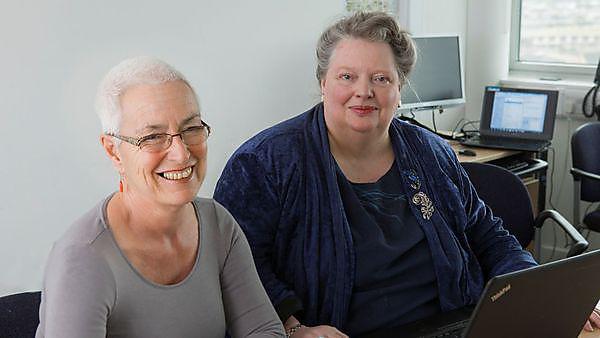 "When law looks at history, it tends to assume that a particular outcome was inevitable."

It is a quote etched in their memories: eminent Cambridge historian Sir Richard Evans telling an audience that “law and history have nothing to say to one another”.

“We have spent the last 15 years showing that they do,” says Research Fellow Judith Rowbotham, reflecting upon her partnership with Professor Kim Stevenson, one that has delivered the case for an interdisciplinary approach to understanding the social and historical context of law and criminal justice.

From finding parallels of modern crimes in past history to looking at how contemporary policy around crime and the use of law in everyday life is overly reliant on models predicated upon studies of big cities, the two have defined a new field of enquiry. In the process, they have created an international network of academics and legal and nonlegal practitioners, and seen their work translated across language and disciplinary boundaries.

“When law looks at history, it tends to assume that a particular outcome was inevitable,” says Judith, a Visiting Researcher. “And with historians, there is often an assumption that once a law is passed, it works as it is intended.”

“What interests us, though, is the cultural, social and historical forces at play when laws come to be passed and the consequences of them,” adds Kim, Professor of Socio-legal History in the Plymouth Law School – and the person whose question prompted Sir Richard to deliver his damning judgment many years earlier.

Kim and Judith met nearly 20 years ago when they were at Nottingham Trent University: “I was known for working on Victorian society and culture,” remembers Judith. “My first book was ‘Good Girls Make Good Wives’, which looked at guidance for girls in Victorian literature. Then Kim rang me out of the blue and said, ‘Were Victorians interested in bad behaviour?’ I can say that, tempted by this opportunity, I abandoned good behaviour without a backwards glance!”

“We started working on how a sense of history, either recent or distant, could really provide context to present ideas and potentially become the basis for future policy,” Kim recalls. “It became apparent to us at this time that there were many other people interested in working on crime and law-breaking across disciplinary boundaries, particularly law and history.”

It resulted in the pair forming the SOLON Research Group in 1999, which now, as the SOLON consortium, promotes interdisciplinary study in law, crime and history, and encompasses seven universities and 350 academics and practitioners. Described by both as an ‘umbrella organisation’, its aim has been to inform members of the latest developments through conferences and regular emails.

“We started working on how a sense of history, either recent or distant, could really provide context to present ideas and potentially become the basis for future policy,” 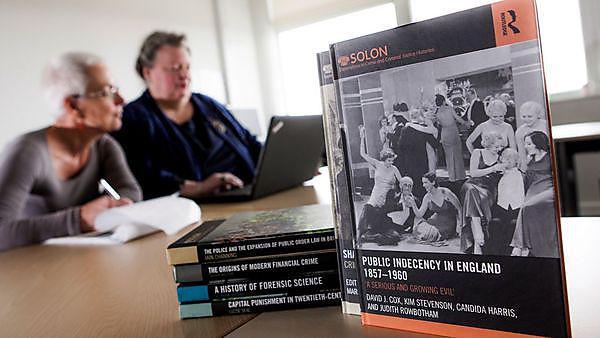 Kim, a former sergeant with Nottinghamshire Police, moved to Plymouth in 2004 and introduced the University to the network – and Judith to the University. They had already organised a number of conferences together while at Nottingham Trent, including ‘Behaving Badly’, ‘Off the Rails’, and three on Hate Crime. From 2004, they added further conferences on Crime, Violence and the Modern State; Experiencing the Law; and a series on War Crimes, the reports of which have circulated internationally and are used by groups in Kosovo, Ghana, Sierra Leone, Cambodia and beyond.

A particular specialism is in crime reportage, and, together with their PhD student, Samantha Pegg, they produced Crime News in Modern Britain: Press Reporting and Responsibility, 1820-2010. This was the first sustained survey of the history of crime reportage, covering the late 18th century right up to the Leveson Inquiry, and explored how reporting has affected how people understand the operation of the law.

They’ve written five books and are editors of the Routledge SOLON series, Explorations in Crime and Criminal Justice History, with seven titles out and three more due shortly. And they are currently leading the Plymouth Crime Project, examining, through articles and an exhibition, the relationship between the perception of crime in the city, and the basis of the civic policy that deals with it.

Judith says: “Thanks to digitisation, it’s possible to look at the types of crime that most affect us on a daily basis, that which is categorised as ‘everyday crime’. The aim is to start the everyday crime project with Plymouth, because it hasn’t been studied from this angle by academics.”

“We wanted to look at provincial locations and see if the current habit of applying universal strategies works. In doing so, we can develop a methodology that provides a template that could be rolled out to provincial towns, here and abroad,” adds Kim.

One of the first events in this project is an interdisciplinary Witness Seminar, in April, which will examine how policing and the public perception of it has changed in Plymouth since the Police and Criminal Evidence Act.

Judith says: “One of the things we argue is that when it comes to interdisciplinary research, you cannot just borrow from neighbouring disciplines as it suits you. You have to understand the theory and the method used by that discipline, and above all respect it, when you choose to use it. I taught myself law through textbooks from the 18th century onwards, bringing myself up to date, and now I teach historians how to be law-minded – and lawyers how to be history-minded.”

“And in the process we have learned a huge amount from one another and intend to carry on doing so,” Kim adds.