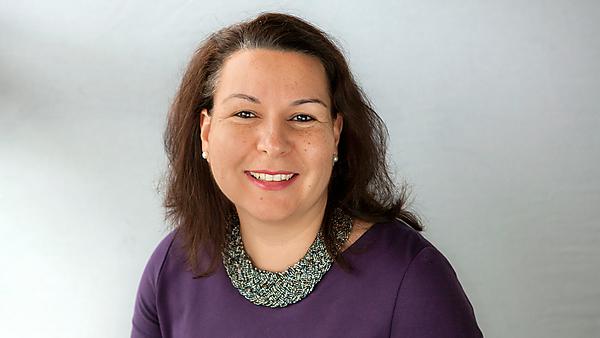 For many people there occurs a moment – or series of moments – when inspirations and influences coalesce into something resembling a career choice. For Haya Al-Dajani, Associate Professor of Entrepreneurship, of the Futures Entrepreneurship Centre, that formative experience was the start of a war.

When Iraq invaded Kuwait in 1990, Haya was a psychology and sociology student at Bath University on a year’s placement in Jordan with the National Centre for Mental Health. What followed was an extraordinary experience: a ground-level view of the evacuation of the centre, the sudden relocation of mental health patients back into the community, and then at the end of the placement, three weeks in Iraq itself working as an interpreter for a Harvard study team.

“A placement focusing on clinical psychology became one of crisis psychology,” Haya says, reflecting on the experience. “It was the first time I learned about the aftermath of a human crisis. By the time I got back to Jordan after those three weeks, I decided I didn’t want to be a psychologist, I wanted to be a researcher.”

Working at the intersection of gender and empowerment, international development, entrepreneurship, and cultural memory, Haya has focused her research upon the plight of refugees in Jordan and, increasingly, other Middle Eastern countries. With Civil War in Syria and turmoil in Iraq displacing millions of people, it’s work that might seem topical and of the ‘now’, but is actually rooted in a 50-year history of refugees in Jordan.

“I’m interested in looking at how entrepreneurship can be a vehicle and catalyst for social development,” she says. “Under that, my main focus is on gender; people who need to be entrepreneurial to have some form of livelihood or addressing poverty alleviation. And it opens up all sorts of questions for governments and aid agencies. How do you manage refugees in such ways that it gives them hope? It is not simply about the food and the vouchers and the accommodation, but giving them the hope there is a future, a potential livelihood. If we don’t do that, things don’t work for refugees or the host community. We need to work with them as partners.”

That work first began for Haya when, having completed a masters degree in social science research methods at Bath, she moved to Jordan and set up her own research consultancy. Despite knowing very little about running an enterprise, it proved to be a very successful venture, and she won contracts with organisations such as the United States Agency for International Development and UNICEF. So in demand were their services that within two years Haya felt she needed to conduct her own research rather than follow someone else’s agenda, and so sold the enterprise to take up a prestigious Senior Fullbright Fellowship, firstly at the University of California – and subsequently at the University of Chestnut Hill in Philadelphia.

“Hooked on academia”, Haya embarked upon a PhD in entrepreneurship at Strathclyde University, via a further stint in Jordan to assess how the development sector had progressed in the two years since she had left.

“It was clear that the crisis in the non-profit sector was not going away, and if anything was getting worse,” Haya says. “So I decided to train in a business discipline, rather than a development discipline, because I could then work to inform the sector. The idea that you rely on the funds and the donations rather than having a sustainability model was, in my opinion, a problem.”

Born in Copenhagen, and having lived in Australia, Italy, and Bahrain in addition to the United States and Jordan, it was not until Haya joined the Norwich Business School in 2007 following the completion of her PhD that she fully began to put down some roots in the UK.

“The PhD was a comparison between women-led NGOs and women-owned SMEs in Jordan, and how they empower their home-based producers,” she says. “Both of them rely on products that are made by displaced Palestinian women in their homes. And the assumption was that it would be the NGOs, who do not treat women purely as producers or suppliers, but as beneficiaries, who would be the more empowering. But my research was showing that the small firms were investing heavily in their home-based women producers, treating them in a more professional manner, training them, and ensuring they continued the relationship in the longer term, rather than regarding them as short-term beneficiaries.”

Over the last decade, Haya has continued her research, and collaboration with her doctoral supervisor Professor Sara Carter (Strathclyde University) and examiner Professor Susan Marlow (Nottingham University). She has secured nearly £2 million in research funding from the EU, UK and other funding bodies, and currently leads two research projects. The first began in July 2016 and was awarded by the Economic and Social Research Council (ESRC) Development Frontiers Research Fund call. This is a three-year research project analysing entrepreneurship as a sustainable means of poverty alleviation for Palestinian, Iraqi and Syrian refugee women in Jordan, Lebanon and Turkey.

The second project began in November 2016, and was awarded by the ESRC and the Arts and Humanities Research Council under the Global Challenges Research Fund programme (involving colleagues from both the Business and Science and Engineering faculties), and is a two-year study that focuses on the resilience of Syrian male artisans displaced to Jordan. Both projects have interesting socio-political and cultural heritage implications.

Haya says: “It’s such a fascinating area, because there are social, cultural and political dimensions. Entrepreneurship can help the refugee artisans to develop genuine transferable business skills and individual and community resilience. Also, their microbusinesses are preserving heritage through the arts and crafts they produce – so the production process itself has far greater meaning than simply an economic benefit.”

Aside from these projects – which will also include the delivery of a social enterprise training programme to Jordanian mentors here in Plymouth, who in turn will roll it out among the refugee communities, Haya is also playing a leading role in the masters programmes in Entrepreneurship, and Entrepreneurship and International Development. She also leads the Responsible Entrepreneurship and Social Innovation Research Group, and co-chairs the University’s Women’s Network.

“It’s been an interesting journey – not all of it planned!” she reflects. “But looking back, so much was influenced by that visit to Iraq. That was where I first saw the people who would become the refugees of tomorrow.”