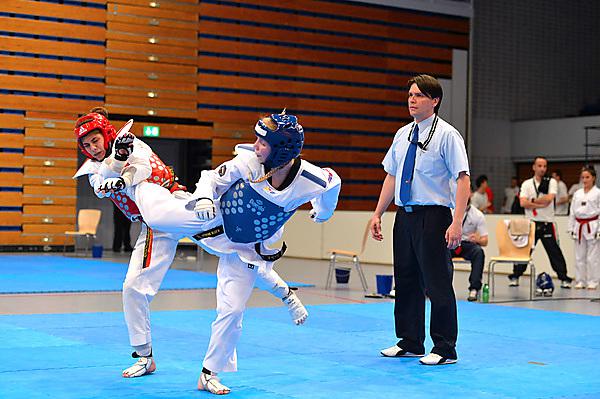 So says British student taekwondo champion Katie Bradley, who, at five foot one and only 49kg in weight, has clearly followed her own mantra.

Coming to the end of a successful first year as a mechanical engineering student and Sporting Scholar at the University, Katie has balanced her studies with competing at the highest level in her discipline. And with the 2020 Olympics firmly in her sights, the busy schedule doesn’t look like stopping anytime soon.

“I’ve got a number of ranking events taking place over the summer,” she says. “And I’ve managed to qualify for the European University Games in Croatia in July, so I can’t wait to represent Plymouth there. It’s been a very busy year, my first as a senior, but I love the challenge and I’m really grateful to the University for supporting me along the way.”

Having attended her first taekwondo class at the age of six, Katie could have had little idea of how far she would progress. Joining on her dad’s advice to help boost her confidence and to overcome bullying, she quickly fell in love with the sport and, after years of hard practice and ascension through the junior ranks, she is now representing Great Britain’s under-21s.

“I was very lucky to have the support of my dad, and taekwondo has pretty much become my life!” she says.

But, despite becoming British National Champion, a World Championship bronze medallist and Commonwealth Champion as a junior, Katie says it was always important to her to have a backup plan. Born in Crawley before moving with her family to Plymouth, Katie knew that she wanted to maintain excellence in academia, and the support offered through the University’s sporting scholarship programme was one of the key factors that influenced Katie to stay in the city.

She reflects: “The financial support has helped me to enter more ranking competitions around Europe and the world, and the sport therapy helps me to improve and keep in good condition. Also the fact that the scholarship team helps me work with my course tutors to try and balance everything where necessary is brilliant.”

Katie has to do plenty of balancing herself, and it hasn’t been without its challenges. In the run-up to the British Student Taekwondo Championships, she carried a minor foot injury, and was unable to make her normal fight weight of <49kg. As a result, she had to move up a weight class to the <53kg division, increasing the challenge, and making her eventual win seem all the more unlikely. Not only that, but she had an assignment deadline looming on the Monday morning, and utilised the four-hour gap between quarter– and semifinals to work on her group project.

“I revised in the car, in the hotel, and during the competition to ensure I got everything done,” she says.

And if that wasn’t enough, she didn’t just win the competition – as the saying goes, she walked it. Each match was stopped after Katie had opened up a 12-point gap, scoring numerous head and body shots to her respective opponents from Brunel University, UCL and Goldsmiths.

She says: “I was so happy to have won the title for myself and as a representative of Plymouth University. As taekwondo isn’t currently part of British Universities and Colleges Sport (BUCS), I don’t have many opportunities to compete for the University, so it was a real privilege.”

In the meantime, she also found that her dedicated studying earned her three firsts and a 2:1 in her first four modules. With exams to revise for and the European University Games to compete in, Katie has her work cut out for the coming months. Then ultimately, it’s onwards and upwards to Tokyo 2020.

“I may have missed a few internationals and qualifying events, but I’m still determined to compete for Great Britain at every opportunity,” she says. “Nothing is going to stop me striving for my dream.”

Judging by her achievements so far, not to mention the size of that fight within the girl, who’d bet against her?!