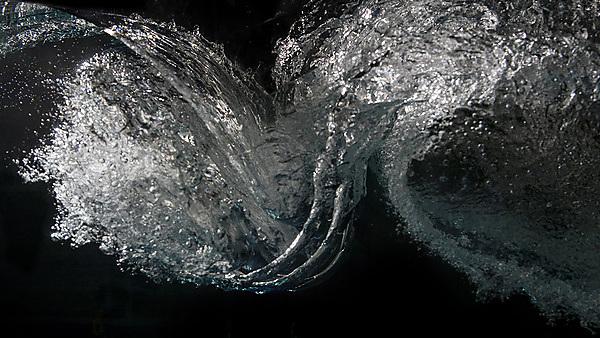 Funded by: EPSRC via UKCMER

There is a growing capability and confidence in the loading and performance of marine energy devices in operating conditions as designs rapidly develop. However knowledge of extreme loading is less mature.

The X-MED project involves a consortium of the Universities of Manchester, Edinburgh and Plymouth and the Scottish Association for Marine Sciences (SAMS) led by Professor Peter Stansby of the University of Manchester. Extreme loads on tidal turbines and floating bodies representative of wave energy devices are being researched. The work components cover CFD modelling, flume and basin experiments, and design implementation.

At Plymouth a taut moored floating body is being tested. This consists of a hemi-spherical base (0.25m radius) with a cylinder attached to the top (overall body height 0.5m). Regular, random and focussed waves are being used with loading and response of the body due to breaking wave impact being measured. A Qualisys motion tracker system and accelerometers are being used to measure 6-Degrees of Freedom and mooring line loads are measured via a bed-mounted load-cell. ADV measurements are also taken.

STAR-CCM+ is a commercial CFD package. It will be used to simulate the interactions between the taut moored floating body and the breaking waves. These simulations will then be compared to the experimental measurements.

To identity criteria for design sea states in waves and current for a taut moored floating body representative of a wave energy device or support structure and establish modelling methods for prediction of response with experimental validation.