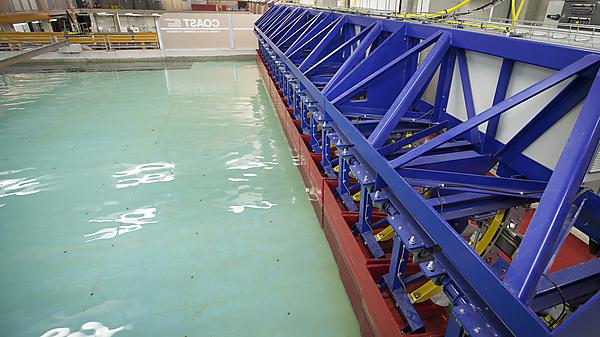 The project is a collaboration between HR Wallingford and the University of Plymouth, with additional funding provided by the Engineering and Physical Sciences Research Council (EPSRC). It focuses on deriving more sophisticated representations of the fragility of coastal structures than are presently adopted in UK Flood Risk Analysis.

Flooding is one of the most destructive and unremitting natural hazards facing the UK costing an estimated £1,300m during the winter of 2013/14 alone. Over the last 20 years or so the focus has shifted from flood prevention towards a more risk-based approach to flood engineering. The flood risk of an area is the product of the “frequency” of occurrence and the magnitude of the “consequences” of flooding events. In general, the flood risk is too complex to derive analytically and has to be approximated through a process called Flood Risk Analysis (FRA), which has been undertaken on a routine basis in England and Wales since 2002. By comparing the flood risk after alterations have been made to the flooding system with the existing risk, FRA can provide an economic justification for the maintenance and refurbishment of flood protection systems, explore climate change impacts, assess the increase in risk associated with new developments and explore risk mitigation measures like property flood proofing.

In FRA the magnitude of the consequences associated with a particular loading event are determined through a “systems-wide modelling approach”. That is, when the system of flood defences protecting an area are subjected to a specific loading, the state of the flood defences (i.e. failed or non-failed) and the subsequent (economic) consequences are analysed in an integrated approach, which approximates the complex real-world system as a simpler network of interacting elements and processes. The structural performance of the flood defences (e.g. seawalls, embankments and gravel beaches) will, in general, have a large bearing on a flood risk estimate. At present, in UK FRA the structural vulnerability of a flood defence is represented by a fragility curve which give the probability of the defence structurally failing given that it is subjected to a particular hydraulic loading. In locations, such as at the coast, where multiple loadings (i.e. water level, wave height and wave period) simultaneously act on a structure, expressing the probability of a structure failing conditionally on a single loading has the capacity to introduce inaccuracies into the structures estimated vulnerability. In addition, in most analyses the fragility representation associated with a particular structure has been derived for a generically assumed form of the structure rather than the specific structure itself which has the potential to add further inaccuracies into the analysis.

The initial aim of the research project is to derive fragility representations that explicitly consider multiple loading variables and/or detailed information about specific structures (see below). By evaluating the changes in a structure’s vulnerability given by these new representations compared with those given when the existing representations are assumed, the merits of subsuming them into any future flood risk analysis will be assessed. 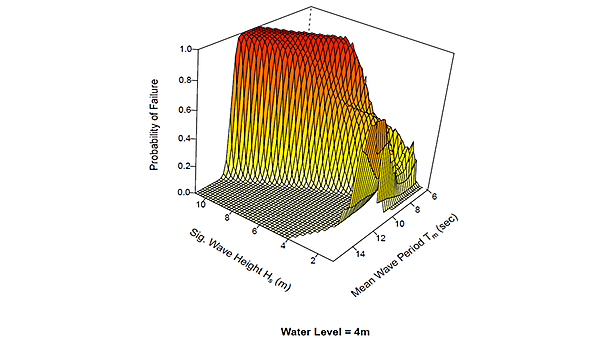 Figure: Multi-dimensional representation of the fragility of a vertical seawall with an adjoining gravel beach.