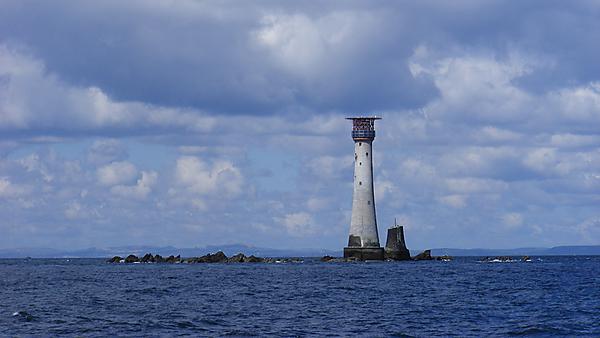 Director of Studies:
Project funded by the School of Marine Science and Technology (SMSE) and the General Lighthouse Authorities of UK and Ireland (GLA).
Researcher: Davide Banfi
Rock lighthouses are built by default in severe environments, being permanently subjected to the action of the wind and waves. Many of the lighthouses around the British Isles are masonry structures which have stood for more than a hundred years. Determination of the load and structural response of these structures is necessary to ensure future survival as they are important for both navigation safety and as historic buildings.
The prediction of wave impact on lighthouses is complicated by three factors and very few studies are available on this topic. First, the shape of the lighthouses is generally different from the typical cylinder widely modelled. Then climate change is leading to an increase in sea-level and potentially to a transformation in the statistical properties of the wave environment. A further complication is given by the irregular sea bed, the bathymetry altering the shape of the approaching wave.
This project will use physical model tests to investigate in detail the interaction between the breaking waves and a scaled lighthouse structure in the new COAST facility at the University of Plymouth. A full-scale experimental campaign on the nearby Eddystone Lighthouse is underway, working with the GLA. Field measurements will address the paucity of data that exists for these structures and will give information on the scaling problem. Also, comprehensive structural modelling of the lighthouse will be undertaken.