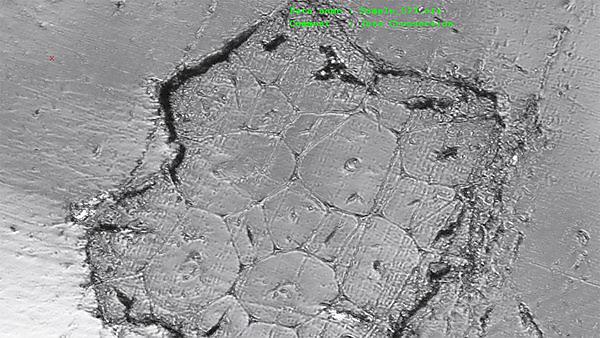 Amandeep obtained a BEng (honours) Mechanical Engineering with Composites (first class) degree in 2007. His group assignment for module MATS320 on the design of an asymmetric crossbow limb was published [1]. He was awarded a PhD for the study reported in his thesis entitled "Numerical models for natural fibre composites with stochastic properties" in December 2010 for data obtained from a single batch of jute fibres from South Asia. The literature review is published in three parts [2-4].

In [5], the jute fibre cross-sectional area was analysed using digital images and modelled using different geometrical shapes (major circle, minor circle, ellipse, superellipse, and convex hull). The area distribution for each case was determined and it was observed that, for all the assumed shapes (except for the minor circle), the area distribution showed a negative skew (the distribution peak shifts toward right) and the maximum peak drops when compared with true area distribution. This negative skew indicates that the method overestimates the fibre area. The drop in distribution peak indicates an increase in the range of the data. The fibre cross-sectional area calculated assuming an elliptical cross-section gives a lower variation in the fibre area compared with the circular cross-section. The minimum elliptical area is calculated from the two orthogonal projection widths and gives the area closest to the true fibre area. Any fibre area calculated using a method that overestimates the fibre area will always underestimate the modulus and strength of the fibre. Using the ellipse will yield an underestimate of both modulus and strength and hence will result in a safer mechanical design when the fibres are used as reinforcement in a composite.

In [6], an examination of tensile test data from 785 individual tests revealed that the coefficient of variation (CoV) for failure strain is consistently lower than the CoV for fracture stress (strength). Hence, failure strain is the more consistent failure criterion. The use of optical microscopy to determine fibre "diameter" and hence cross-sectional area may explain this difference as the strength is normally calculated from an assumed cross-sectional area (CSA). Thus, it is recommended that failure strain is used as the key design criterion for natural fibre composites in order to improve reliability in the design of natural fibre-reinforced composites.

In [7], results of one hundred tensile tests at each of five distinct fibre lengths (6, 10, 20, 30 and 50 mm) were reported. The jute fibres were found to have a Young’s modulus of ~30 GPa with ultimate strength and fracture strain falling from ~558 to ~336 MPa and ~1.79% to ~1.11% respectively as the length increased from 6 to 50 mm. Weibull parameters for the jute fibres were estimated for each fibre length using a maximum likelihood estimate (MLE), i.e. point estimates. Two empirical models (a linear and a natural logarithmic interpolation model) were successfully developed to characterise the ultimate strength and fracture strain across the entire range of the fibre lengths tested (i.e. 6–50 mm). The logarithmic interpolation model for ultimate strength and fracture strain was found to produce a better fit to the experimental data (i.e. at the five distinct fibre lengths) than the linear model, but both models produce a better estimation for ultimate strength than for fracture strain. In [8], the previously reported NLIM analysis was extended to include fibres with lengths up to 300 mm. The NLIM produces a significant improvement in predicted properties over the MDS model. Use of Anderson–Darling goodness of fit number (GOFN) confirms this finding and reveals a reduction factor (Multiple Data Set (MDS) model GOFN/logarithmic model GOFN) for this measurement of 2.74 for strength and 2.23 for strain.

Quasi-unidirectional composites were manufactured by resin infusion with a flow medium/distributor mesh. Three plates used standard materials and one plate had black-dyed fibres in white-pigmented resin for enhanced contrast during microscopical examination.

A novel methodology [10] using image analysis was developed to determine (a) the fibre volume fraction and (b) the fibre orientation distribution factor for the quasi-unidirectional jute fibre reinforced epoxy resin composites. For fibre volume fraction, digital micrographs were smoothed to reduce noise in the image, an intensity histogram informed selection of the threshold intensity for conversion to a binary image, the image was morphologically closed and opened to remove internal voids and small features respectively and the fibre volume fraction was calculated as the ratio of the detected fibre area to the total image area. For fibre orientation, the image was sharpened with Contrast-Limited Adaptive Histogram Equalisation, a threshold was set for conversion to binary and then a masking image was rotated at a number of seed points over the image to find the angles with the minimum sum of intensity at each point. The data generated was then used to validate new rules-of-mixture equations for natural fibre composites.

In [11], it is proposed that a fibre diameter distribution factor (FDDF) should be included in the rule-of-mixtures. An equation for the FDDF gives a value between 0-1 to reflect the decrease in fibre modulus with increasing fibre diameter. For fibres where the modulus is independent of diameter, the FDDF will be 1 and hence the new equation reduces to the traditional form.

Further, after comparison of the true cross-sectional area of the irregular cross-section fibre and the apparent area based on a "diameter" measured by optical microscopy, a fibre area correction factor (FACF) was determined [12, 13]. The two new parameters above can now be incorporated into the rules of mixture to estimate the elastic modulus of all and the strength of quasi-unidirectional natural fibre composites: 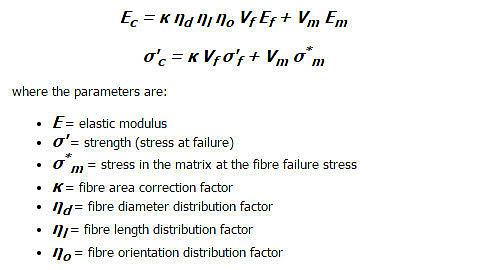 and subscripts "f" and "m" refer to the fibre and matrix components respectively. The inclusion of the FACF (value 1.42 for jute) to account for the non-circular cross-section of the natural fibres resulted in improved predictions of both the elastic modulus and the strength of jute fibre composites. Data from other authors was analysed in order to triangulate these findings for elastic modulus and twelve of the fourteen cases returned an error of significantly reduced magnitude when the above FACF was used.

A finite element model was used to generate data for the determination of the tensile modulus of an FRP composite made with fibres of irregular cross-section [14]. A range of degrees of anisotropy were considered. The error in the predicted modulus was found to be small for irregular fibres. The finite element analysis demonstrated that the RoM can be safely applied to predict the elastic modulus of composites reinforced by anisotropic natural fibres of non-circular cross-section. Further, variation in the anisotropy by changing Poisson’s ratio only had minimal effect on the predicted composite modulus.

The e-thesis (4.612 MB PDF) was one of the first five research theses in the Plymouth Electronic Archive and Research Library (PEARL)

Summerscales et al [15] have compiled provisional data for the Fibre Area Correction Factors required by the new equations, based on recent data in the literature. More research is required to establish if the FACF values are dependent on the fibre batch under consideration, and on whether/how the FACF changes with increasing fibre average diameter.

Javanbakht et al [16] showed the importance of incorporating FACF in both analytical and numerical models. They described a finite element analysis methodology for creating embedded natural fibres within a composite and mimicking the damage evolution. Linear material models were used, although the non-linear response of the natural fibre composite was implicitly allowed. The discrete modelling of fibres, and the technique of removing the failed elements during the analysis, were the means for including the gradual material deterioration during the loading. However, updating the strength of the fibres according to their length after failure showed a substantial improvement in estimating the tensile strength and failure stress. 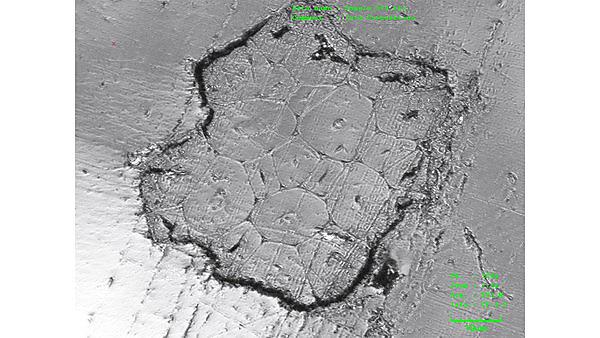 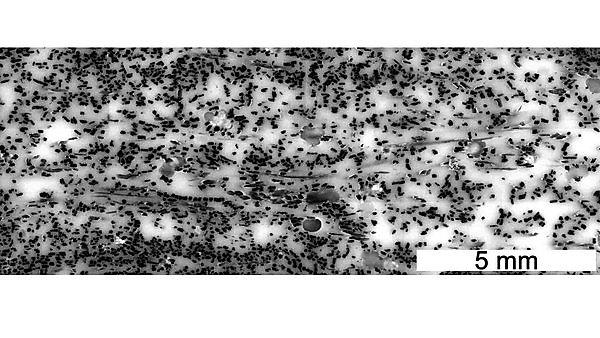 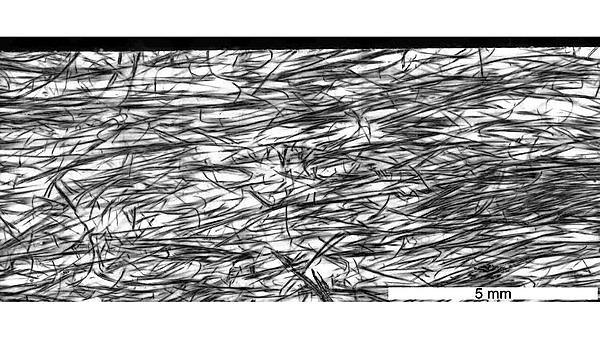 2. J Summerscales, N Dissanayake, W Hall and AS Virk
A review of bast fibres and their composites.
Part 1: fibres as reinforcements
Composites Part A: Applied Science and Manufacturing, October 2010, 41(10), 1329-1335.