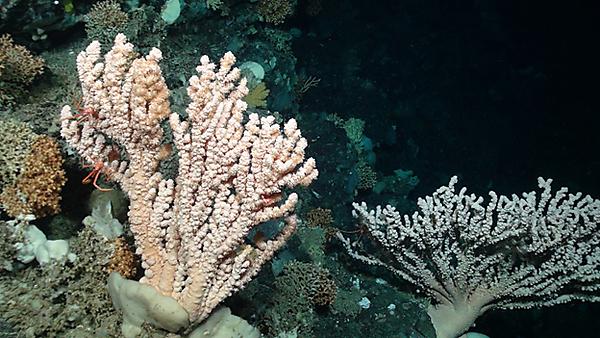 Species populations are connected to each other through both movement of adults (migration) and eggs, larvae and juveniles (dispersal). If populations become isolated from one another (i.e. are no longer connected), then through genetic mutation, drift and natural selection, they may become so different that they evolve into new biological species. Understanding how populations become isolated is critical to understanding the process of speciation. In the marine environment, many species do not move as adults (e.g. corals) or move very slowly (sea urchins). This means that for different adult populations to remain connected they rely on dispersal of early life history stages. Most marine species have a larval stage that lives in the plankton for a period of time, moving with the currents, before settling in a new area. It is larval dispersal that keeps distant populations connected. So understanding patterns of larval dispersal is important to understanding connectivity.

In the deep-sea (>200m) the bathyal region of the continental slope has been identified as supporting high species richness and being an area where the rate of origination of new species may also be high. The reasons for this are not clear, but given the importance of connectivity to population isolation and speciation, it follows that the key to understanding patterns of species diversity in this region lies in understanding connectivity. New research has suggested that because the speed of the currents that carry larvae decreases as you go deeper, larvae might not be able to travel as far, leading to a greater tendency for populations at bathyal depths to become isolated over a given distance, and thus increasing the chances of speciation.

This study investigates how patterns of connectivity vary with depth using:

This research has important implications for the sustainable management of the marine environment. Humans increasingly rely on the marine environment to supply us with food, building materials, fuel, and to soak up carbon slowing the progress of human induced climate change. However, our increasing use of this environment is starting to affect is 'normal' functioning, affecting the processes that allow it to provide us with food, fuel, etc. To try to help protect and sustain these 'ecosystem functions', Governments all over the world are setting up networks of Marine Protected Areas (MPAs) to ensure against serious ecosystem disturbance and cascade effects resulting from overexploitation that ultimately impair ecosystem function. There are many questions to be answered when trying to set up an MPA network, but one important question is where to put them to make sure that the populations that live within them are not isolated from each other but are connected. This research will help answer this question in the deep sea, and thus help managers, governments and society ensure the long-term health of the ocean.

“This work is important from both academic and applied perspectives. On the one hand it will help us understand how populations divergence over the depth gradient. On the other it will give us some idea of whether models of larval dispersal tell us anything useful, and so whether they can help us plan for better spatial use of our marine environment, including design of marine protected area networks.”

“This work will help us to understand the diversity of communities at different depths in the North East Atlantic and how well connected these populations are, providing vital information for marine spatial planning.”