Illuminate 2017 is taking place at the city’s Royal William Yard from Friday 24 to Sunday 26 November. The event has evolved from a lantern parade around the Barbican into what is on offer this year: a showcase of intriguing light installations, interactive performances, projection mapping, workshops, food drink and more.

I was part of a team that started up the LUX Light Festival in Wellington, New Zealand, which was really born out of the university, and the staff and students’ work and research interests. So when I moved to Plymouth it was fantastic to discover there was the opportunity to do something similar here.

This year is a bit of a test run, and then we’ve got two more years to build it up into something massive. The University’s role in that is key.

Illuminate could be a signature event for Mayflower 400 as it will happen at the start and the end of the celebrations.

In Wellington we attracted more than 100,000 people over a nine day festival, and that’s in a city the same size as Plymouth, and with similar demographics. We’ve got ambitious goals around Illuminate - what we’re aiming for is the same sort of turnout as the British Fireworks Championships.

We’re also looking at the way it can benefit businesses, invigorating the night time economy with a family-oriented event.

The aim is to scale the festival year on year, there’s a lot of city and waterfront to play with. If you look at what’s unique about Plymouth it is that waterfront, and even the island, making a huge natural basin.

But the Royal William Yard is a great place to start from, and Urban Splash have been fantastic to work with. The light works are one thing, but it’s also about the atmosphere that you create and the opportunity for people to come together socially.

The work I’ll be showing is a smaller, more interactive version of Bloom, which was developed by myself and my colleagues at Squidsoup, an international group of artists, researchers, technologists and designers creating digital and interactive media experiences.

Squidsoup showed Bloom at last year’s Christmas at Kew celebrations in London. That was an installation of around 1000 individual spherical units, each comprising a wi-fi enabled processor, GPS, accelerometer, LEDs and speaker. So the units know where they are, they can listen, respond and communicate, and together they made an audiovisual symphony of 1000 synchronised and connected voices.

Illuminate will also feature work by the University’s Associate Professor (Senior Lecturer) in Fine Art Contextual Practice Phil Power, and recent graduates Paige Alexander and Juliet Middleton-Batts. And there will be lots more light, sound, performance and workshops from other artists and our partner organisations. 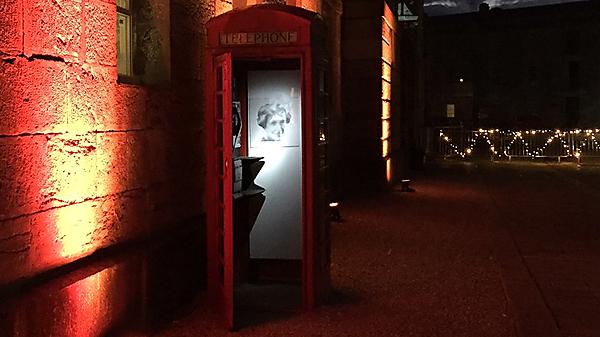 The incredible light-based festival, returned to the historic Royal William Yard on 22–25 November 2018. The festival offered an immersive experience, with projections and light installations set out across the Yard, live performances and interactive opportunities, and formed an integral part of the Mayflower 400 celebrations.

“Light Festivals around the world create wonderfully vibrant and social events for cities and their citizens to enjoy. They are a fantastic display of a city’s creativity and a great, fun, family event that gives people something to look forward to during the dark winter months.”

Chris Bennewith, Head of the School of Art, Design and Architecture, University of Plymouth.