Audiences at this year’s world-famous Christmas at Kew celebrations will be captivated by a spectacular sound and light display created with the involvement of a University of Plymouth academic.

Bloom is the work of Squidsoup, an award-winning international art and design collective who have developed an array of imaginative and iconic installations over the past decade. It is one of 12 installations across the gardens as part of a mile long trail produced by Culture Creative.

Their latest project encompasses 1,000 swaying 'flowers', with each head delicately flickering and changing colour, that forms part of an explosion of festive colour helping to light up Kew Gardens for six weeks from today.

The lead visual designer of Squidsoup is Professor Chris Bennewith, who has recently joined the University as Head of the School of Art, Design and Architecture.

This is the second year he and colleagues from the collective – who include Dr Anthony Rowe (Squidsoup founder), Liam Birtles (Bournemouth University), Dr Sam Ferguson (University of Technology Sydney) and Dr Oli Bown (The University of New South Wales) – have been invited to be part of Christmas at Kew. Their display for 2016 builds on a previous project – Field – which was created to mark the 100th anniversary of the Battle of the Somme.

It saw 923 lights were installed outside the Welsh National Opera to commemorate the 923 Royal Welsh Fusiliers who died during one of the First World War’s most notorious battles.

For the Kew project, there will be more lights and the addition of more colours to create the impression of an actual carpet of flowers. The ‘flower heads’ can then be programmed with changing combinations of light, but are also fitted with small speakers to create a fully immersive audiovisual experience. The location was inspired by a naturalised tulip field that had been created in Kew this year, the electronic flower heads replicating this spring field of colour

“It was amazing to be invited back to Kew, as the Christmas celebrations there are a showcase of ingenuity and imagination each year. We believe our project epitomises that and when we have shown iterations of it before, the reaction has been of genuine amazement. After our show at the Welsh National Opera, people said it was a stunning way to remember those who had lost their lives on the Somme. I am looking forward to seeing people’s reactions this time around and hope it will inspire them to think about what is possible.”

Before coming to Plymouth, Professor Bennewith was Associate Pro Vice-Chancellor for Enterprise at the Toi Rauwharangi College of Creative Arts, part of Massey University in New Zealand.

Outside of academia, he spent eight years working in the interactive media industry in London, principally with Squidsoup (which used to operate commercially before becoming a not-for-profit organisation in 2002), creating online multi-user 3D games for clients such as Sony, Levis and Universal.

“We are always looking for ways you can digitally enhance the environment around you using creative content and new technologies. Throughout my academic career, I have always tried to keep my research practice alive, partly because it is important to lead by example but also to keep abreast of the latest developments. As designers we are constantly pushing the boundaries, and working at the edge of what is doable, something which I think is exemplified by both students and lecturers in the School here at Plymouth.”

Christmas at Kew will be open to the public from 5pm-10pm between Wednesday 23 November and Monday 02 January. 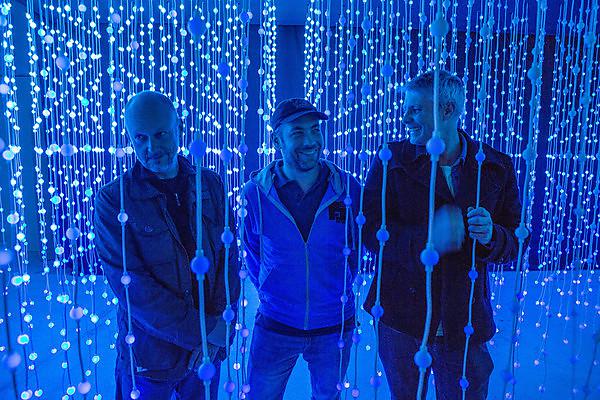 Squidsoup is an international group of artists, researchers and designers (UK/NO/NZ) working with digital and interactive media experiences. Our work combines sound, physical space and virtual worlds to produce immersive and emotive headspaces where participants can take an active role in their experience. We explore the modes and effects of interactivity, looking to make digitally mediated experiences where meaningful and creative interaction can occur.

Find out more about the collective's work at http://www.squidsoup.org/