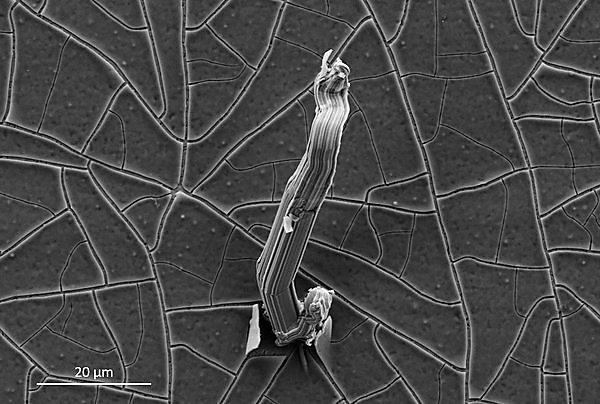 What are tin whiskers?

Tin whiskers are growths of pure tin that form spontaneously from tin electroplated surfaces. Tin whiskers can grow up to a few millimetres in length (but typically only a few 100 μm) and may be straight, kinked, curved or in the form of odd-shaped eruptions. Tin whiskers can cause problems in electronics by growing long enough to bridge between surfaces causing the circuit to short out, a situation worsened by the continuing trend for miniaturisation in electronics and move to Pb-free. The growth of these whiskers can begin very soon after the electroplating of a sample, however the initiation of growth may take years to occur; it is this unpredictability of whiskers that causes concern to reliable operation. At the current time, there is no one widely accepted mechanism for why and how whiskers grow; though there are number of theories and some commonly agreed factors that affect the growth of tin whiskers. 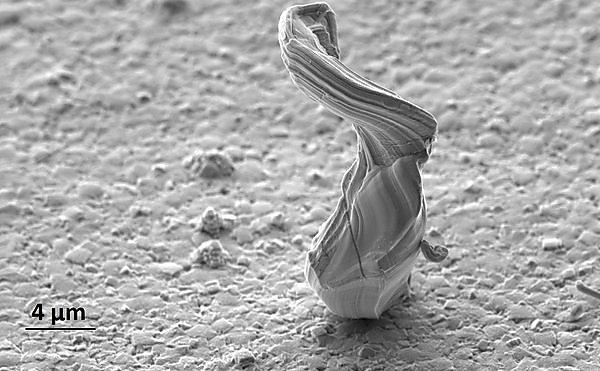 What are the intended outcomes for this research?

How are the intended outcomes going to be achieved and analysed?

Conversion coatings will be produced to form a significantly thicker oxide layer compared with electrochemical oxidation.

It is thought that by having a thicker oxide layer, whisker growth can further be reduced.

Whisker growth was evaluated using optical microscopy; three randomly selected samples for the electrochemically oxidised and untreated groups of samples were analysed at each analysis point and the average whisker density calculated. The first graph shows that, for both sets of samples, the whisker density increases progressively with time, however, the presence of the electrochemically formed oxide significantly reduces whisker growth compared with that from the untreated samples that were left to develop a native air-formed oxide. 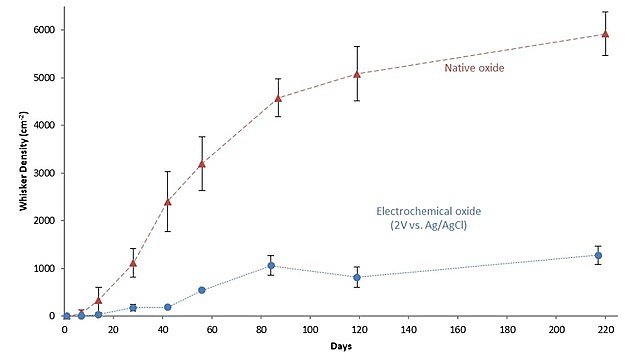 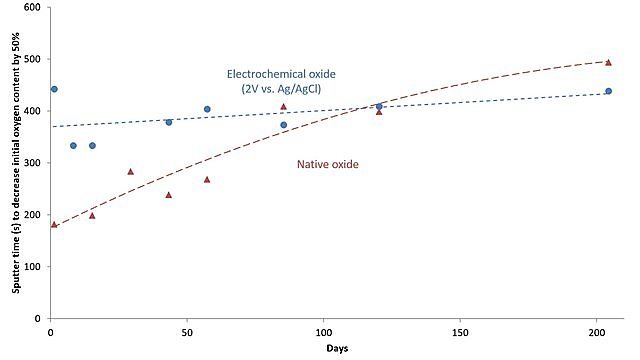 The longest apparent length of whisker in each frame used to determine whisker density was measured at each time interval and is plotted in the top graph. For the untreated samples, the results indicate that the whisker length increases gradually over the 220 days of storage but that the rate at which the whiskers grow progressively reduces with time. Compared with the untreated samples, the length of the longest whisker is significantly reduced for the electrochemically oxidised samples throughout the period analysed, with little apparent increase in whisker length between ~80 and ~220 days. The bottom 2 graphs shows the change in the distribution of the longest whisker per frame for both electrochemically oxidised and untreated samples, between 14 days and 119 days of storage. 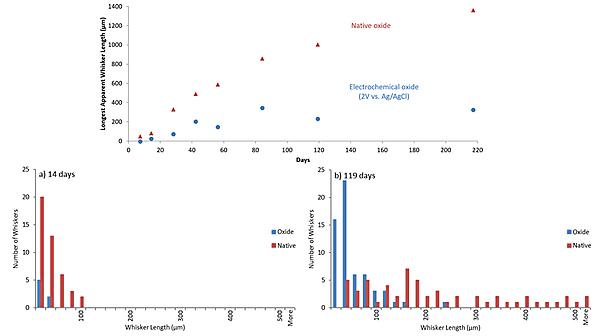 Alternatively, it may suggest that the electrochemical oxide influences the rate at the whiskers grow once the whisker has penetrated the oxide layer. It might be expected that when a whisker penetrates through the oxide film, the whisker would have a similar rate of growth to the untreated samples; therefore, the electrochemical oxide also appears to be having an influence on the driving force for whisker growth as well as inhibiting whisker initiation. It was shown previously that for Sn-Cu on Cu, IMC growth didn’t appear to be influenced by the presence of the electrochemical oxide [1]. In the absence of an oxide film, the surface of the tin serves as a source for vacancies to facilitate tin diffusion through the coating, to support the growth of whiskers [2]. However, the presence of a sufficiently thick oxide may impede diffusion of tin atoms by reducing the number of available surface vacancies [3], therefore slowing the rate at which whiskers may grow. This may suggest that whisker growth on the electrochemically oxidised samples is diffusion limited. 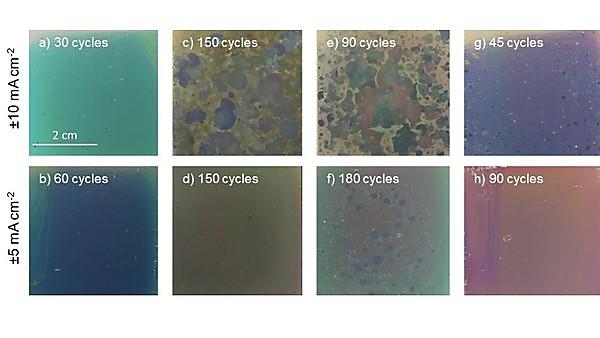 The set of the images to the left are photographs of tungstate conversion coatings on electroplated pure Sn. The photographs show that for increased cycles, the quality of the coating decreases. This was due to gas being liberated at the service, causing non-uniformity of coating thickness. This can be overcome by reducing the current density, as shown in the bottom row of photographs. These photographs show that lowering the current density while passing an equivalent charge will improve coating quality; additionally an increased amount of charge can be passed using a lower current density, therefore enabling the formation of thicker coatings. 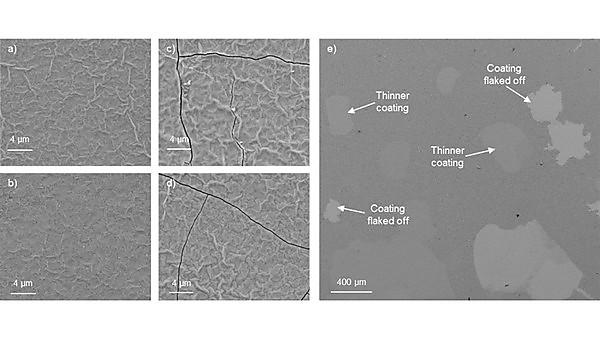 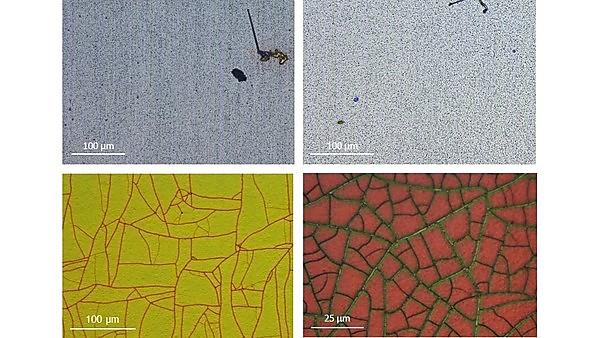 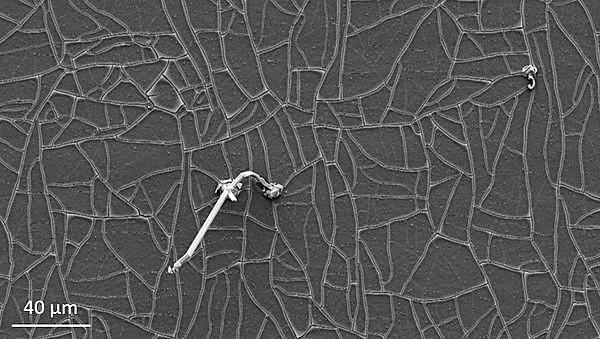 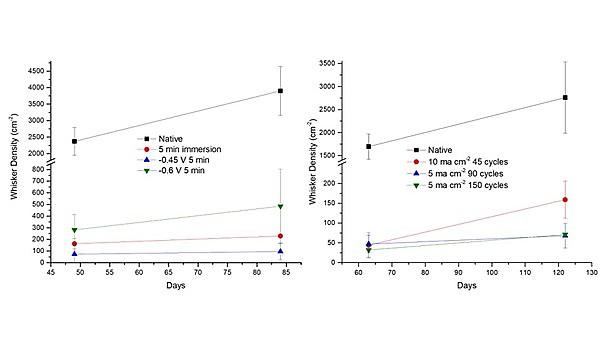 The following conclusions can be drawn from the results obtained in the current study: