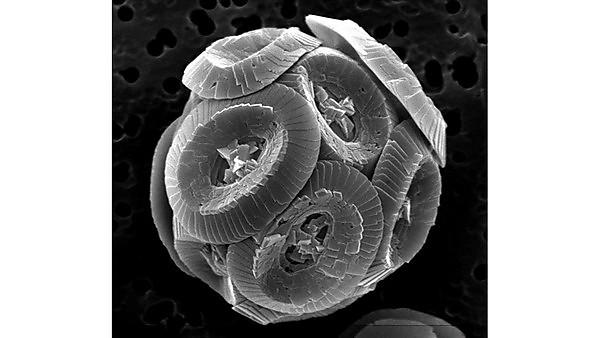 The coccolithophore Coccolithus pelagicus is characterised by the formation and secretion calcified plates. The formation of these plates (coccoliths) was investigated by transmission electron microscopy (TEM).

The formation of these plates in C. pelagicus was similar to that seen in Emiliania huxleyi in that mineralization occurs in Golgi-derived and nuclear associated vesicles.

The TEM data shows that only when the single coccolith is mature, does it begin to migrate away from the nucleus before secretion.

A structure known as the reticular body, distinct from the Golgi body, was also visible at the distal surface of the developing coccolith suggesting that it is a common feature of all placolith coccolith producing cells when only a single coccolith is produced and secreted at a time. 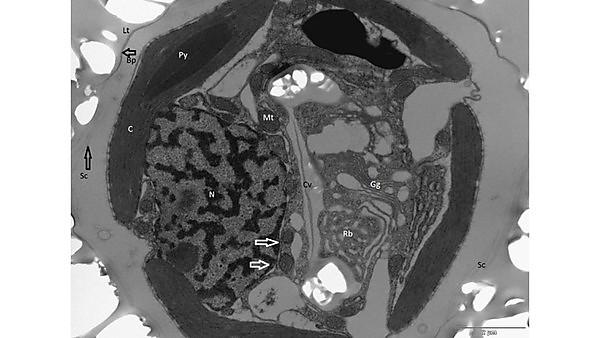 Cultured cells were fixed in 2.5% glutaraldehyde for a minimum of 1 hour. After transferring to Eppendorf tubes, they were washed in buffer and secondary fixed with OsO4 for 1 hour. The cells were then dehydrated in an alcohol series, resin infiltrated and the resin polymerised. The resulting blocks were sectioned with a Leica Ultracut E. The sections were then collected on 200 mesh thin bar copper grids, then stained with Uranyl acetate and Lead citrate. The sections were then examined in a JEOL JEM1400 TEM.

C. pelagicus ultrastructure as observed with a TEM. Clearly visible are the voids in the resin left by the external coccoliths (Lt) and their close association with the baseplate of the coccolith (Bp) and the layer of organic scales (Sc). Above the Nucleus (N) is one of the Chloroplasts (C) with a single thylakoid traversing Pyrenoid (Py). Also Reticular body (Rb) Golgi (Gg) Coccolith vesicle (Cv) Mitochondria (Mt)

The nucleus is surrounded by the Nucleoplastidial envelope (indicated by the two white arrows) and the mitochondria (Mt) are closely associated with the coccolith vesicle (Cv) which contains a newly forming coccolith. The vesicle is in turn closely associated with the Golgi body (Gg) and the mass of anastomosing vesicles that resemble a Reticular body (Rb). These are located in the distal pocket of the developing coccolith vesicle.

Flagellar Root and Base

Cell (left) with insert (right)showing the detail of a compound Flagellar root (Fr) and its proximity to the Reticular body (Rb). The Flagellar root (Fr) can be seen associated with the Flagellar base (Fb). These structures are involved in the cyto-skeletal contractions that result in the extrusion of the fully formed coccolith. 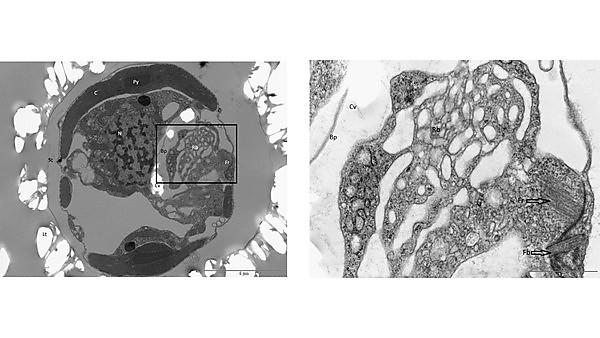 Up until the publication of the Taylor et al., 2007 paper there had been no TEM data on the extrusion of coccoliths in C. pelagicus. The data published suggests that for the majority of Coccolithogenesis, the maturing coccolith stays closely associated to the nucleus and the reticular body. It would appear that it only moves away during the final stages of maturation prior to extrusion, as can be seen in the above images.

1. Image showing the coccolith vesicle (Cv) very close to the Nucleus (N) and the Reticular body (Rb). (All other abbreviations as used previously.)

2. Another image showing the coccolith vesicle (Cv) close to the Nucleus (N) and the reticular body. However, in this image, the Coccolith (Lt) appears to be growing in size.

4. The coccolith (Lt) and the coccolith vesicle (Cv) appear to be moving to the exterior of the cell in this image. Again the coccolith appears to be increasing in size.

5. The large, nearly fully formed Coccolith (Lt) begins to move away from the nucleus (N) and move further towards the exterior of the cell. It still remains closely associated to the Reticular body (Rb).

6. An image showing the coccolith moving towards the exterior of the cell through the gap in the Chloroplasts (C).

7. A large, fully formed Coccolith imaged between the two Chloroplasts (C) as it nears the completion of its journey prior to final extrusion through the layer of organic scales (Sc) and interlocking with the coccosphere.

8. A coccolith (Lt) about to push through the layer of organic scales.

9. Image of a coccolith (Lt) pushing through the layer of organic scales (Sc) immediately prior to the interlocking of the coccolith with the external coccoliths in the coccosphere.