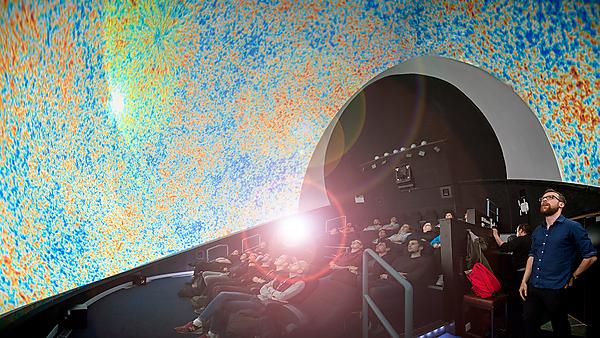 Classical mechanics describes the motion of particles and extended objects in response to applied forces. It is used to understand the behaviour of systems as small as bacteria and as large as the orbits of planets around stars. Classical mechanics has a long history and is the bedrock upon which many other theories of the physical world, such as quantum mechanics, build.

Quantum mechanics describes systems at the molecular scale and below, where classical mechanics' assumption of rigid particles breaks down. It can explain the macroscopic behaviour of solids and the chemical elements as a consequence of interactions on the quantum scale. Many technologies rely on quantum mechanics: solar cells, lasers, magnetic resonance imaging scans (MRI) and quantum computing to name a few.

“Learn about the deep links between symmetry and motion and about how these rules change in microscopic systems when quantum effects play a role.”

An example of the evolution of a quantum particle trapped in a harmonic potential well.  The system is described by a complex valued wave-function, the modulus of which is related to the density of probability  to find the particle in a given position at a given time.
We can learn about motion by using mathematics' ability to abstractify. One pendulum attached to another (the double pendulum), when moving in the plane, appears to be a 2D system. But by studying its trajectory in abstract 4D 'phase space', (which includes the pendulum momenta as well as positions as co-ordinates), we see a deeper structure emerge. The animation, produced by final-year BSc Mathematics with Theoretical Physics student Daniel Jervis, shows how a 2D cut of this phase space changes, for increasing pendulum energy. Regular orbits eventually break down into random noise: we are observing the transition to chaotic motion.