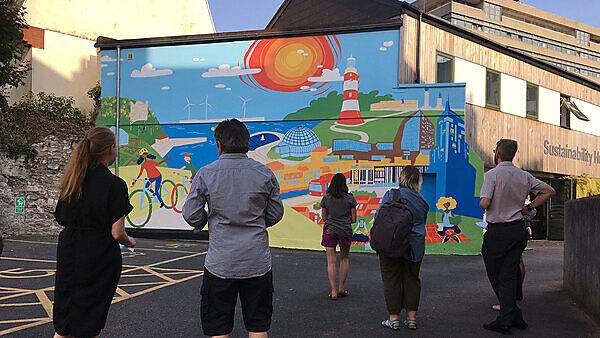 Net Zero Visions is funded by the Arts and Humanities Research Council and led by (principle investigator) and (co-investigator) at University of Plymouth, in collaboration with Devon Climate Emergency. Its mission to create a resilient, net-zero Devon where people and nature thrive. It is rooted in the idea that we cannot achieve change unless we also try to imagine it; and that imagining it can raise a wider awareness of what is at stake and encourage action. Acclaimed professionals in animation, illustration, interactive games, and public murals are currently working with communities to produce positive ‘Visions’ of locations across Devon as carbon net-zero in 2050. However, this imaginative effort is also open to everyone.
The Net Zero Visions mural on the Sustainability Hub has been designed by University of Plymouth graduate Eleanor Croker and painted together with the Net Zero Visions commissioned mural artist, Dr Kate Crawfurd, and assisted by Jessica Mallory, a University of Plymouth graduate.
The mural’s augmented reality experience was created by University of Plymouth, students Rosie Carter and Aaron Alchin, and includes animated local species, such as the Brown Banded Carder bee, the Dunlin, a type of sandpiper found wading along the coast, primroses and oak leaves. The augmented reality experience is available by scanning the QR code at the mural.
The mural depicts a range of net zero and sustainability visions for the university and for the city of Plymouth and celebrates initiatives already taking place:
The mural also depicts:
Some of these goals have already been achieved within the University, find out more about and .

Want to get involved?

University of Plymouth students can find out how you can get involved on the environment and sustainability portal (log in required).

If you have seen any of our murals, please fill in our quick survey to share your thoughts.