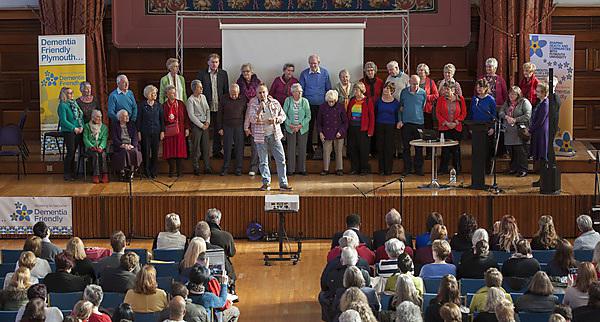 Alzheimer’s Society’s Singing for the Brain groups have launched a bid for chart success with an emotional song that aims to highlight what is still possible after being diagnosed with the condition, and to raise funds for research and support.

Never Will Forget (John’s Song) was penned by songwriter and radio presenter Ian Calvert. Ian was inspired to write the song and raise funds for charity, having witnessed his father-in-law’s physical and mental health deteriorate due to dementia.

In partnership with Peninsula Arts at Plymouth University and Alzheimer’s Society, the song has now been released for download in a bid to heighten awareness of the effects of dementia and raise vital funds to support the charity’s work.

And while Ian assumes the role of lead vocalist, his backing singers are made up of people with dementia and their carers, all members of Alzheimer’s Society’s Singing for the Brain groups from Plymouth.

Ian Calvert, who has been a TV and radio presenter in the South West for four decades, said:

“I’ll never forget seeing my father-in-law deteriorate from being a sharp minded and wonderful husband, father and successful businessman, into a shadow of himself. I just want to make people more aware of what my father-in-law and his family went through. I’m extremely proud of the song and hope people like it – but I also hope they listen to the message, as it will give them a much greater understanding of the condition.”

Doreen Abbot, a participant of the Singing for the Brain group, said:

“I was thrilled that our group took part in the recording of this song. Singing for the Brain is so important to many people with dementia and their carers, and it goes to show that people can live well with dementia, you can see it in their smiles each week.”

Watch a video filmed during recording of the charity single

Working in partnership with Plymouth University and Peninsula Arts, the Singing for the Brain groups themselves have demonstrated that being an active part of the community is still very much possible if you receive a diagnosis of dementia.

There are currently around 850,000 people living with dementia, costing society over £26 billion per annum, and that number is predicted to reach one million by 2021.

Plymouth University is the UK’s first dementia friendly university, and is at the forefront of research into new treatments and support networks having recently been awarded more than £1 million to fund dementia studies.

Ian Sherriff, Academic Partnership Lead for Dementia at Plymouth University and one of the Prime Minister’s National Dementia Champions, said:

“There is ground breaking research taking place to treat the effects of dementia, and widespread efforts to provide additional support for people with the condition. But, in the short term at least, raising awareness is one of the key challenges to help those with the disease, their families and carers. Never Will Forget is an amazing project that has provided enjoyment for those taking part, while raising funds that could potentially transform their lives – and that of others – now and in the future.”

Singing for the Brain is a social activity for people with dementia and their carers enabling them to express themselves and sing with others in a similar situation.

“Even when many memories are hard to retrieve, music can sometimes still be recalled. It is great that people with dementia were able to be actively involved in the making of this record. Working in partnership with Plymouth University and Peninsula Arts, the Singing for the Brain groups themselves have demonstrated that being an active part of the community is still very much possible if you receive a diagnosis of dementia.”

Never Will Forget (John’s Song) was arranged for orchestra by Simon Ible, Musical Director of Peninsula Arts at Plymouth University, and recorded in Plymouth by Simon Honywill and Jay Auborn of DBS Music.

Study to investigate the role of proteins in dementia

RELATED LINKS TO OTHER WEBSITES:

Watch a video of the song's recording on YouTube