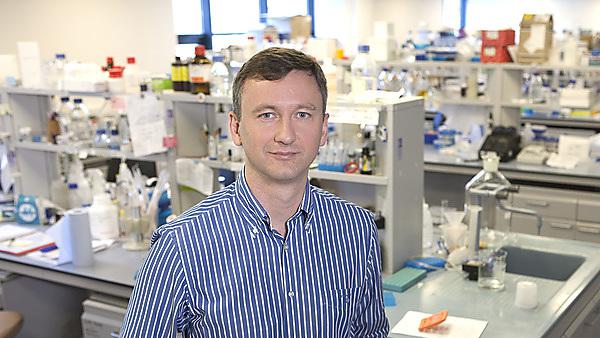 Dr Oleg Anichtchik, who will lead the study

Researchers from Plymouth University Peninsula Schools of Medicine and Dentistry have received funding from Alzheimer’s charity BRACE for a pilot study to investigate the role of proteins in the development of dementia diseases such as Alzheimer’s and Parkinson’s.

The study relates to a condition called dementia with Lewy bodies (DLB). Lewy bodies are tiny deposits of protein in nerve cells and it is believed that they account for 15 to 30 per cent of all cases of dementia.

The protein is called alpha-synuclein and it is closely related to another protein, beta-synuclein. The research team will investigate whether and how interaction between the two proteins plays a role in preventing or slowing the build-up of alpha-synuclein.

“The relationship between the two proteins has been the subject of debate with regard to the aggregation of alpha-synuclein, the role that aggregation plays in DLB and how interaction with beta-synuclein affects the process. We believe that our work will reveal important facts about that relationship which may in time be used to developed therapies for patients.”

“We are very grateful to BRACE for supporting our work in this area.”

Mark Poarch, Chief Executive of BRACE, said the charity was delighted to make the £7000 award.

“It’s thanks to our supporters that we can fund ground-breaking research, such as the new Plymouth study.

“We recognise the importance of the research initiated by Dr Anichtchik and are confident that this will be a valuable contribution to the fight against this cruel disease”.

The grant to Plymouth is the second in Devon, and BRACE is keen to attract new supporters in the county to help ensure that funds are raised in support of local research.

BRACE supports a number of research teams in Bristol, Bath, Exeter, Plymouth and South Wales, including laboratory based research and clinical research.

A new case of dementia occurs somewhere in the world every four seconds.