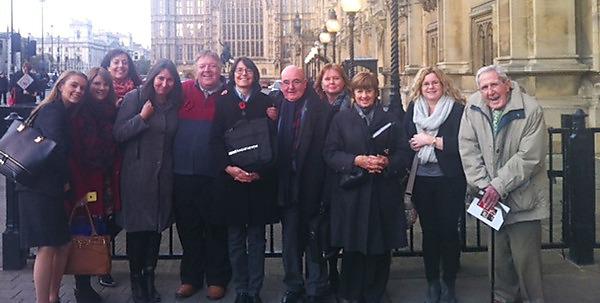 Plymouth University’s pioneering efforts to support rural communities in fighting dementia have been showcased to some of the UK’s most influential political figures.

Academics from the University, alongside high-profile campaigners and community leaders, visited the Palace of Westminster on Friday 07 November for an audience in the House of Lords.

There they met peers and MPs, including former Age Concern England Director General Baroness Greengross and Baroness Crawley, both members of the All Party Working Group for Dementia, to talk about the University’s many projects tackling dementia through research and support.

The visit centred around a meeting of the Prime Minister’s Rural Dementia Task and Finish Group which is chaired by Ian Sherriff, Academic Partnership Lead for Dementia at Plymouth University.

Mr Sherriff, one of the Prime Minister’s National Dementia Champions and a national board member of the Alzheimer’s Society, said:

“Thanks to high-profile projects and partnerships, Plymouth University is recognised nationally and internationally for our work to raise the profile of dementia. We are already influencing policies being drawn up across the political spectrum, both at a local and national level, and this visit has cemented our status as a pioneer of dementia research and support.”

They have spent months gathering information from people with dementia and their carers about ways to improve their quality of life, with a 14-point project plan then drawn up to assist public and community organisations in implementing dementia friendly practices.

Among the academics at Friday’s event was Professor Rob Sneyd, Dean of the Plymouth University Peninsula Schools of Medicine and Dentistry. It has recently received funding from Alzheimer’s Research UK to play a lead role in their new South West Research Network, and around £1million from the EPSRC to develop an innovative, real-time diagnostic technique for dementia.

“Dementia is an important research strand for us, with projects ranging from lab-based, cellular investigations to analyses of dementia care and its delivery. This has been a wonderful opportunity for us to talk about the breadth and depth of our work, the impact it is currently having on this most terrible of diseases and the potential it has for management techniques and therapies in the future.”