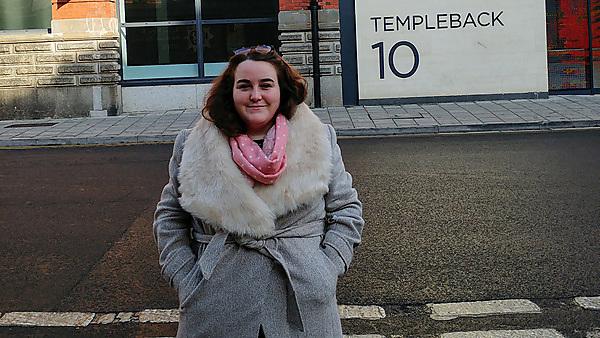 “Plymouth is a fantastic, diverse city that seems to really welcome students to its shores. I’m happy with the time I had there!”

Since graduating last year I’ve secured a place on a graduate scheme with insurance company NFU Mutual (the UK’s leading rural insurer) in a programme designed to create future leaders of the business. It’s a three year scheme enabling you to undertake a variety of placements in the first two years that ultimately lead to a more structured role in the third year.

Although the route I’ve taken from studying English into the world of insurance isn’t the most obvious progression, my graduate scheme focuses on customer service and academic background in general wasn’t a main factor in the selection of candidates; instead, they focused on skills and candidates’ potential. The development of my communication skills throughout my degree was critical to securing the role, because being an effective communicator is a highly desirable quality; for example, during seminars we were encouraged to form convincing arguments and argue them effectively, which is an essential skill to compete in the business world!

I’m in the very early stages of my career and I’m fortunate to work for a fantastic company that seems invested in my development both professionally and personally. I think on a personal level, you can sometimes lack confidence as a fresh graduate in a new role: you have to nudge and remind yourself a few times that your employers saw the potential in you and that you’re more than capable if you use your skills and resources.

As I’ve said, I’m still in the early stages of what I hope will be a long and prosperous career! I think the best thing that I’ve accomplished so far is the progression onto professional qualifications; completing my certificate of insurance in two weeks is virtually unheard of if you’re not on my graduate scheme. Meeting the CEO on day two made me feel pretty special too!

If you were just about to graduate again, what would you do differently?

I feel I’ve been extremely lucky in landing such a fantastic job, but it didn’t just happen; I spent September-March of my third year applying for graduate jobs and attending interviews and learning and developing from the process. Doing your research and not leaving your career to the last minute is extremely important.

Internships. Internships. Internships. Spend your summers working productively. Even if you can’t find anything other than a summer job in a retail store, make the most of it. Add value, push yourself: you need fodder to sell yourself and prove your skills at competency based interviews, which most graduate schemes include as a part of the recruitment process.

Also be prepared to look a little deeper into something which, at face value, may seem ‘dull’ or ‘boring’ because there’s often a plethora of opportunities and things to learn that drain away those incorrect initial appearances.

Its clichéd, but my time at Plymouth nurtured me from an awkward teenager to an adult. I had so many opportunities, some of them missed, but the mere possibility shows the breadth available to students.

What lessons/skills did you gain from your course?

English encompasses many elements and really isn’t given the credit it deserves. Communication is an obvious skill, but my favourite memories are the objective arguments I’d have with tutors trying to demonstrate my viewpoint. My course encouraged free-thinking and a challenge to conventions. The ability to question is an important skill to have and we should not be afraid to use.

I completed an internship in between my second and third year which I had found using the University’s career portal. I firmly believe that the experience and confidence obtained from this has allowed me to secure my current role. Doing an internship enables you to have real-life, working examples of not just your experiences and skills but how you’ll add value to the company.

The time I spent with The Knowledge, the University’s newspaper, and UPSU Radio definitely gave me experiences in areas I hadn’t considered before. They were also the perfect creative outlet. It gave me project management experience, as well as the ability to actively demonstrate that I could work in a time-limited, team environment.

Plymouth is a fantastic, diverse city that seems to really welcome students to its shores. I’m happy with the time I had there!

Don’t get trapped in the student bubble. Get a job, explore the area, do an internship, add value to a sports society; whatever your goals for the future, you can start putting the groundwork into action now.