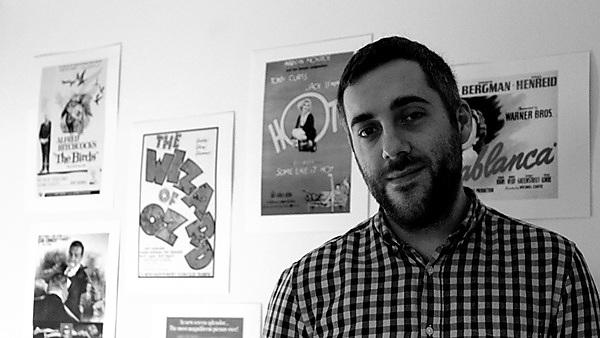 “Studying at Plymouth allowed me to be in an environment with like-minded people where there were few limitations. From day one everyone was talking about grand plans or adventures they were going to have, and that sparked a fire in me… I met some ridiculously talented people (teachers and students) who inspired me greatly.”

I worked several roles in retail whilst pursuing a career in film journalism. After moving to London with my now wife, I landed a role as a contributor to a magazine based in Kensington and Chelsea. Becoming the Film Editor, I developed a network of contacts in the film industry and decided to start my own website: UK Film Review. As the Editor, I manage the contributions of a dedicated group of film critics and journalists: my Minions.

There was a period when I was unsure about the role I was looking for; one constant for me was my passion for film. My studies at Plymouth had a huge amount to do with that and I knew it would anchor me to the industry in some way. There were times when an alternative career path would dangle in front of me, but I strongly felt that being passionate about work is paramount to feeling fulfilled and I would only get that if I was able to be involved, in some way, with film-making. It sounds utterly clichéd but it doesn’t seem like work when it is something you really care about.

The hardest part is the struggle between pursuing my chosen career and paying the bills. Glamorous as the movie industry seems, there is not a huge amount of money in film reviewing. Supplementing my endeavours with other, more financially viable, jobs has been essential, and at times it has been really hard to know whether to quit and just go with something a little less fantastical. I’ve watched too many underdog films though! If the Average Joe’s can win in Dodgeball, so can I.

The first time a film chose to use a quote from one of my reviews on their DVD cover! It was for some B-Movie found footage movie called The Dinosaur Project. I genuinely enjoyed the movie and gave it a great review (one of only a few critics who did, apparently), so they asked if they could use my quote and I was like, “Yeah, why not.” Secretly, I was patting myself on the back and more excitable than Will Ferrell in Elf!

I would like to have got more experience during my university degree trying to write for different publications and volunteer for things, just to try them out. Being a student is pretty much the only time when you can excuse that kind of freedom when it comes to trying new things without anyone really getting worried; if I did that now people, in particular the bank with whom I have a mortgage, they would start frantically talking about pension contributions or P45s.

Learn to love watching terrible films! I cannot tell you the amount of times I have had to endure a horrible movie and people around me are saying, “Why are your smirking? This is terrible!” If the euphoric catharsis which comes with unleashing a torrent of word bullets about Michael Bay’s latest atrocity could be bottled and sold, there would be jobs for everyone!

Studying at Plymouth allowed me to be in an environment with likeminded people where there were few limitations. From day one everyone was talking about grand plans or adventures they were going to have, and that sparked a fire in me. The idea that something could happen just because I wanted it to was huge! I met some ridiculously talented people (teachers and students) who inspired me greatly. It was also a place where a single day could be endlessly surprising: from watching a Stanley Kubrick film in the morning, talking Edgar Allen Poe in the afternoon, dressing as a pirate in the evening, and eating a hash brown melt from Jake’s by midnight. It taught me to embrace the unknown.

Watching It’s a Wonderful Life in a screening with my American Studies class. The night before we had all been out and the screening was at 9.00am; everyone at the beginning was half asleep, my friend Josh actually went to sleep! But by the end everyone was totally captivated and we all stayed after to discuss the best Christmas film ever! My vote went to Home Alone 2.

Do you stay in touch with other University alumni or lecturers?

Many of my closest friends went to Plymouth, and we meet up a few times a year. My wife is also an alum and she has friends who went too. I wish I had stayed in touch with my lecturers, but after being such a clinging mess during my dissertation they probably wouldn’t want to talk to me! Perhaps I will drop them a line and seek absolution. They were literally the coolest people, and they knew so many quotes from The Simpsons it puts me to shame.

One hundred percent. The campus is fantastic, the staff are amazing, and it is one of the only places I have been where wearing board shorts in December doesn’t result in mockery but applause!

Sleep less and do more! Even if it seems ridiculous to watch a marathon of zombie movies on a Tuesday afternoon, just do it. Stories like that are golden memories later in life.