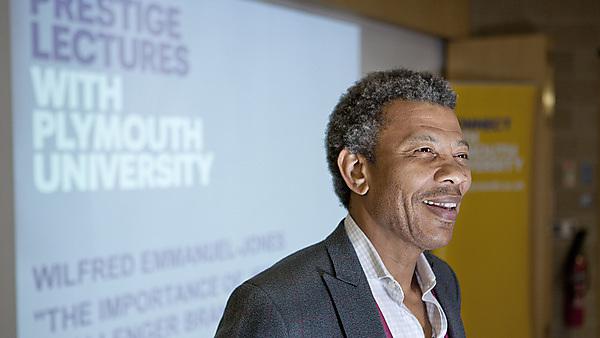 ​Wilfred Emmanuel-Jones was born in Frankfield, Clarendon, Jamaica. He came to the UK at the age of four and was raised in inner city Birmingham. He attended a secondary modern school, which he left without gaining any qualifications.

For a number of years Wilfred worked as a chef, before pursuing a career at the BBC, becoming a producer/director mainly working on food and drink programmes. He is credited with bringing many of the top celebrity chefs to the small screen including Gordon Ramsay, Antony Worrall-Thompson, Brian Turner and James Martin.

In 1994 during the last recession he founded a food and drink marketing agency in London which went on to run successful marketing campaigns for Loyd Grossman sauces, KETTLE Chips, Plymouth Gin, Cobra Beer and other challenger brands.

In 2000 Wilfred bought a small farm in Devon, and seven years ago launched The Black Farmer food brand whose products are now available in all major multiple retailers. The brand markets award winning sausages - now the second largest and fastest growing premium pork sausages in the UK - as well as bacon, chicken, cheese and cooking sauces. Wilfred has written The Black Farmer cookbook which is widely available.

One of Wilfred’s driving forces is to give young people more opportunity. In 2005 he launched a young city farmers scheme through which young people from inner city communities are given the opportunity to experience what it is really like to live and work in the rural community. Young City Farmers is run annually with the Royal Agricultural College in Cirencester.

In 2006 Wilfred was selected to represent the new Chippenham constituency for the Conservative party. After gaining 21,000 votes, he narrowly missed out on winning the seat.

The University of Plymouth awarded Wilfred an honorary doctorate in business in 2011. He is President of the Meat Training Council, and a member of the government's Entrepreneurs Forum.