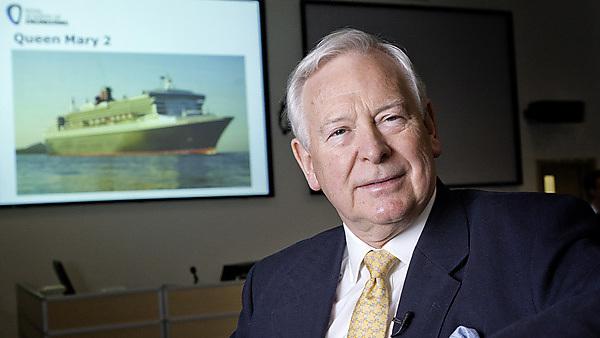 ​Born into a farming family in County Down (Northern Ireland), he studied Naval Architecture and Mechanical Engineering at the College of Technology and Queens University, Belfast and joined the ship design team at Harland & Wolff in 1964. After extensive ship design and research experience (Lloyds Register and NPL) he held a number of senior management positions in technical, production and ship sales.

He was appointed Managing Director of Austin & Pickersgill (Shipbuilders) Sunderland in 1974. Following nationalisation of the shipbuilding industry, he was appointed to the Board of British Shipbuilders Corporation (1978), later becoming Deputy Chief Executive. He returned to Harland & Wolff (1983 - 93) as Chairman and Chief Executive to lead a turn around and transfer from Public to Private Sector.

Sir John joined Babcock International plc as CEO in 1993 and Chairman and CEO (1994-2000) - during a period of significant Group turn around and transformation. In 1997, he became a Non-executive Director of British Gas which led to his becoming Chairman of the Lattice Group on its demerger from BG Group in 2000. Lattice merged with National Grid in 2002, with Sir John becoming Chairman of the combined Gas and Electricity company, National Grid Transco.

Sir John was elected a Fellow of the Royal Academy of Engineering (1983) and an Elder Brother of Trinity House (2010), President of Smeatonian Society of Civil Engineers (2010), a Visiting Fellow of University of Oxford, a member of the General Committee of Lloyds Register of Shipping and Vice President of The Royal Navy and Marines Charity and a governor of the Royal National Lifeboat Institution.

He is a recipient of honorary doctorates from a number of universities in the UK and Ireland. He was President of the Royal Institution of Naval Architects (1996-1999) and Prime Warden of the Worshipful Company of Shipwrights (2000-2001) and an Honorary Freeman of the Worshipful Company of Fuellers and the Tallow Chandlers Livery Company. He led ‘Young Offenders into Work’ program from 2000-2011.

He has served on the Defence Academy Advisory Board, was a Member of the Government's Asia Task Force and was Deputy Chairman of the White Ensign Association (2008/9). He was knighted in 2001 for Services to the Defence and Shipbuilding Industries and was appointed GBE in 2012 for Services to Industry and the Voluntary Sectors.