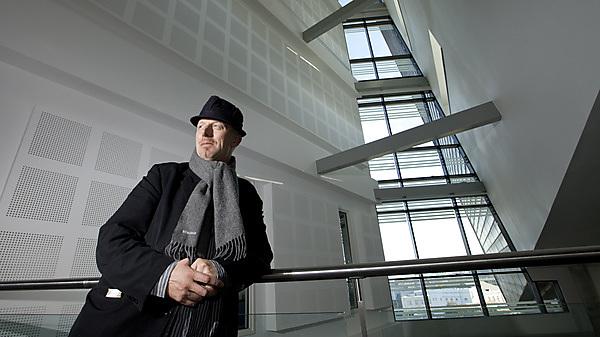 Before the lecture Tom met with Bob Brown, the University's Head of Architecture, and architecture students during a tour of the studios and the student's work.

The lecture was attended by more than 100 staff, students and guests, including many architects from across the City.

Tom embodies the enterprising spirit of University of Plymouth. A University of Manchester graduate, he started out selling fire extinguishers door-to-door and now heads a multi-million pound company.

His company, Urban Splash, was founded in Manchester in 1993 and is now the country’s leading regeneration company. It has received 304 awards to date for architecture, design and business success, including 47 prestigious RIBA Awards - the most won by a property developer.

Tom's company is responsible for many high profile development projects across the country, including the Royal William Yard in Plymouth; Fort Dunlop and Rotunda in Birmingham; and Castlefield and New Islington in Manchester.

Tom was awarded an MBE in 2009 for his services to architecture and urban regeneration. He is also chair of the Manchester International Arts Festival and the Centre for Cities Think Tank; Chancellor of the University of Manchester; and a trustee of the Manchester United Foundation Charity. In 2009 he was appointed by the Prime Minister as a Trustee of the Tate Gallery.

Among many other personal awards, Tom has received the College of Estate Management Property Award and the RSA Bicentenary Medal. He is an honorary fellow of the Royal Institute of British Architects, and has received a number of honorary degrees and doctorates, including an Honorary Doctorate of Arts from University of Plymouth in 2009.

Tom's prestige lecture included reference to his company’s work at Plymouth’s Royal William Yard. The former naval victualing yard is considered to be one of the most important groups of historic military buildings in Britain and now, following Urban Splash’s regeneration, has become the most prestigious address in the City, housing the famous River Cottage Canteen.

The University of Plymouth has worked closely with Urban Splash in identifying space at the Royal William Yard for use by students in the Faculty of Arts, and acknowledges the value of that location for the faculty.