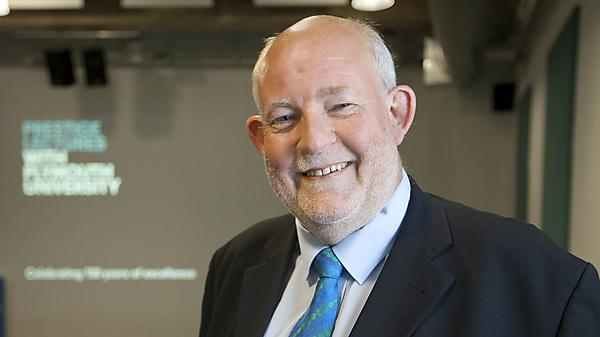 Charles Clarke, former Home Secretary, Secretary of State for Education and Skills and Labour Party Chair, visited the University of Plymouth to deliver a 150th anniversary prestige lecture to a large audience of staff, students and external guests.

Charles discussed how, in the rapidly expanding world of global higher education, the UK - including Plymouth - has an enormous contribution to make.

He began his visit to the University at the Students' Union, where he delighted the sabbatical officers with tales of his own time as president of Cambridge Students' Union, and treasurer and president of the National Union of Students during the mid-1970s. He also told the sabbatical officers that they could well be the future decision makers and politicians at Westminster.

Before leaving UPSU to deliver his lecture he was interviewed for The Polytics Show at the Students' Union radio station.

During his lecture and Q&A session, Charles said that UK universities need to provide more international experiences for their students and move out of their "comfort zones" to take on the challenges of off campus learning and online degrees, a practise already implemented by large US universities such as Harvard, MIT and Stanford.

He also said that universities have a key role to play in economic and social development and noted that University of Plymouth appeared to be performing very well on the student employability front.

Charles has a lifetime of experience and expertise in the fields of politics and education. In 1980 he entered professional politics when he was elected Labour councillor for Chatham ward in the London Borough of Hackney.

During this time he also worked as a part-time researcher for Neil Kinnock MP, as well as a teacher of mathematics. Charles became political advisor and then Chief of Staff during Neil Kinnock’s time as Labour Party Leader and Leader of the Opposition.

In May 1997 Charles was elected Labour Member of Parliament for Norwich South, during Tony Blair’s landslide government victory. He then became a member of the Treasury Select Committee and Parliamentary Under Secretary of State for School Standards.

In 1999 he was appointed Minister of State at the Home Office, with particular responsibility for the police. He was appointed Secretary of State for Education and Skills in 2002 and Home Secretary from 2004 to 2006, before returning to the backbenches.

Since leaving Parliament in May 2010, Charles has been very active in the fields of international education, academic politics, migration and international activities. He is a non-executive Director of LJ Create, a global business based in Norwich; a strategic consultant to the Open University; special adviser to INTO University Partnerships; and advisor to Nelson Thornes/Infinitas Learning.

Charles continues to promote educational development internationally - particularly focusing upon the strengths of UK education at all levels. He works as a Visiting Professor in Politics at the University of East Anglia, and Visiting Professor in Politics and Faith at the University of Lancaster; a council member of the European Council for Foreign Relations; member of the International Advisory Board of the Schengen White List Project; steering group member of the Apeldoorn Conference; and a consultant to Beachcroft LLP.​