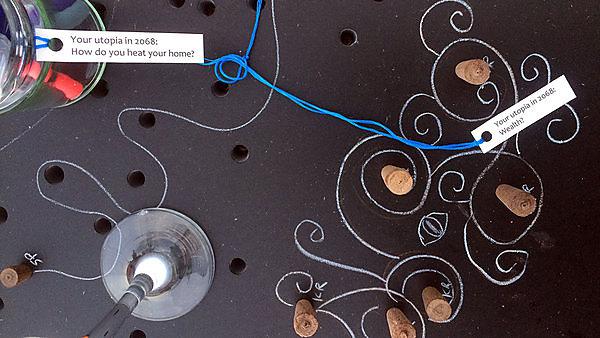 Feasts for the Future is part of an AHRC funded project exploring the imagination of alternative presents and better futures.

Achieving a better future society can often seem impossible, a hopeless dream. But what elements of that future are already around us and just waiting to be brought forward, seized and shared?

Feasts for the Future explores how communal meals might act as one way of bringing elements of a ‘utopian’ future into our shared present. This website records how a collection of communities in Devon, England, went about holding a series of ‘Feasts’ which also had, at their heart, the collective imagining of a better future. It will also continue to provide a collection of resources which might inspire or support anyone who is intrigued by the idea of turning an everyday meal into a utopian event, or ‘feast for the future’.

Feasts for the Future is part of the AHRC funded project, Imagining Alternatives, which will run for 24 months between January 2018 and January 2020.

Imagining Alternatives explores how writers since the late nineteenth century have tried to imagine and narrate alternative presents and better futures: it considers the intertwined aesthetic, political and cultural issues bound up with such attempts, drawing on a wide range of fields, from utopian studies to the environmental humanities. As well as the Feasts, the project will feature the following events:

Please check back here later for more information on these as the project develops.
David will also be presenting ongoing research at international conferences through the course of the Fellowship.

“Who are we? Where do we come from? Where are we going? What are we waiting for? What awaits us? … It is a question of learning hope. Its work does not renounce, it is in love with success rather than failure. … The work of this emotion requires people who throw themselves actively into what is becoming, to which they themselves belong. It will not tolerate a dog’s life which feels itself only passively thrown into What Is, which is not seen through, even wretchedly recognized. The work against anxiety about life and the machinations of fear is work against its creators, who are for the most part easy to identify, and it looks in the world itself for what can help the world; this can be found. How richly people have always dreamed of this, dreamed of the better life that might be possible. Everybody’s life is pervaded by daydreams: one part of this is just stale, even enervating escapism, even booty for swindlers, but another part is provocative, is not content just to accept the bad which exists, does not accept renunciation. This other part has hoping at its core, and is teachable. It can be extricated from the unregulated daydream and from its sly misuse, can be activated undimmed. Nobody has ever lived without daydreams, but it is a question of knowing them deeper and deeper and in this way keeping them trained unerringly, usefully, on what is right.” Ernst Bloch, The Principle of Hope, ‘Introduction’ (1954).

Feasts for the Future

Over the course of 2018 a group of communities with an interest in transforming how we buy, use and generate energy came together to hold a series of ‘utopian feasts’. These communal meals acted as a medium in which ideas of a better future, and how it might be achieved, could be explored and tested, shared and supported, initiated and evolved.

Discover more about the specially designed Feasts for the Future table

Make an everyday meal a ‘Feast for the Future’

Talk – think – eat – laugh – drink …Turning an everyday meal into a ‘Feast for the Future’ can be as simple as deciding to do it and then just working it out as you go, and seeing where you end up. But for those who are interested, this site collects together a series of originally commissioned pieces from people with a wide variety of expertise and experience, on the broad theme of turning an everyday meal into a utopian feast. Contributors range from a best-selling novelist to a world-leading utopian sociologist, from a chef-scientist to an anthropologist, from a historian to an archaeologist, from experts in philosophy and landscape architecture to scholars of communications and urbanism – and more. So read on, to gain some food for thought that is fit for a better future!

Discover how you can make a Feast for the Future