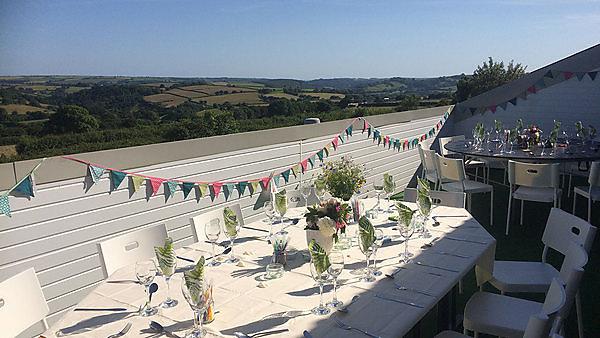 The Feasts team came together with members of Plymouth, South Dartmoor, Teign and Tamar energy communities.

Some of us skirted up onto the moor before proceedings began. It was hot, and we saw many sheep.

Barnaby’s table made its debut.

Prompts and questions had been scattered around the space. We know what needs to change – why doesn’t it? Will there be police in utopia? Over the final course people scribbled ideas on cloth napkins which might inform the ‘feast for the future’ they are planning for their own community.

The food was vegan. It was sourced and cooked by the kind RedPod Food folk at the Clay Factory.

There were views across the South Hams to the south Devon coast. The sun set and the moon was visible.

A music playlist had been assembled from suggestions sent in by all feasters. Contrary to the impression which might be given by the video, it did not consist solely of Justin Timberlake.

Feasts for the Future