The formation of new oceanic crust represents the largest magmatic system on Earth, and involves the cooling and solidification of magma (supplied from below by partial melting of the Earth's mantle) along the 70,000 km global network of seafloor spreading axes. Since the rocks of the deep oceans are largely inaccessible, scientists trying to understand how magma builds new crust at spreading axes employ geophysical (seismic) experiments to investigate the sub-seafloor. Results are then compared to and combined with observations made on oceanic rocks in ophiolites (fragments of oceanic crust and upper mantle that have been pushed onto the continents and exposed above sea-level) to develop scientific models of seafloor spreading.

In the search for magma chambers along the East Pacific Rise, the most magmatically active spreading axis on Earth, geophysicists have discovered thin (10's m thick) lens-shaped magma chambers (known as 'axial melt lenses') at the top of the lower crust. These are thought to sit on top of mushes made up of crystals surrounded by small amounts of magma, that feed melt upwards into the overlying melt lens. More detailed experiments have shown that the physical properties of these melt lenses change along the spreading axis, suggesting that the proportion of melt to mush varies on a range of length-scales. Upwards expulsion of magma from the melt lens happens periodically via forceful intrusion of sheets of magma (forming so-called 'sheeted dyke complexes'), leading to eruption of lava on to the seafloor.

This geophysical picture of the magmatic plumbing system of seafloor spreading axes (based mostly on decades-old inferences from seismic experiments) is incomplete, however, and lacks any constraints on the pathways followed by magma migrating into and out of axial melt lens systems. This project will directly determine the migration pathways along an axial melt lens system that has been mapped out along a 100 km complete spreading segment preserved in the Oman ophiolite. We will use a technique called 'anisotropy of magnetic susceptibility' to measure the 3D preferred alignments of crystals resulting from the flow of magma during the formation of crustal rocks. We will then combine these observations with geochemical analyses of rock compositions to establish whether and how 3D spatial variations in magma flow regimes along a spreading axis controls the geochemical evolution of magmas during crustal construction. This novel approach will allow us to develop a comprehensive model for the anatomy of the magma systems responsible for forming two-thirds of the Earth's surface, testing and challenging the predictions of remotely-sensed seismic investigations. This project is led by Professor Tony Morris, and will work in collaboration with Dr Michelle Harris, Professor Chris MacLeod (Cardiff) and Dr Benoit Ildefonse (University Montpellier). 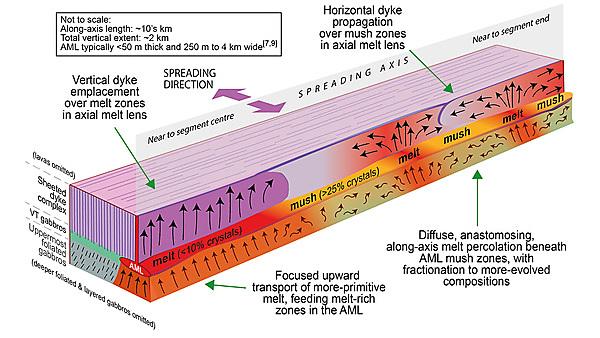