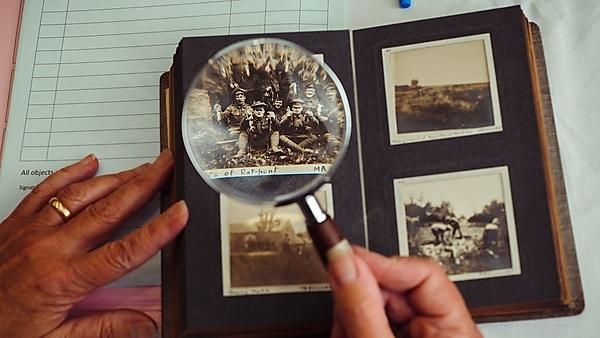 Students and academics from the University of Plymouth will be helping to uncover hidden artefacts from the First World War as part of a national initiative.

The University’s School of Humanities and Performing Arts is hosting a Digital Collection Day as part of the Commonwealth War Graves Foundation’s Lest we Forget project.

Taking place on Wednesday 6 March in the Roland Levinsky Building, members of the public are being encouraged to bring in artefacts including letters, medals and other memorabilia to be digitised as part of a campaign to preserve memories of the conflict.

Lest We Forget: Keep Their Stories Alive is an ambitious project, run in partnership between the Commonwealth War Graves Foundation and the University of Oxford to create a national digital archive.

People coming to the Plymouth event will be met by a team of experts – including Associate Professor in History Dr Harry Bennett – and trained student volunteers from the BA (Hons) History and BA (Hons) English programmes at the University.

They will get the chance to learn more about their artefacts and each item will be accurately recorded into the archive, to digitise the items and record the stories connected with them.

“We are delighted to be hosting this event and hope lots of staff, students and the general public will come along to have their artefacts and the stories behind them recorded for posterity. This is a great opportunity for students from our history and English programmes to work with experts in this field and get really hands-on with items that have played an important role in world history.”

Previous Lest We Forget events held around the country have seen members of the public bringing in rare objects, such as an original First World War grave marker.

“It’s great to have this event in Plymouth to capture some of the amazing stories that can be revealed through the everyday family mementos in people’s homes. As well as the Commonwealth War Graves Commission’s work to maintain and restore war graves and memorials around the world our Foundation enables projects that help keep those people’s stories alive. Collecting a digital copy of First World War artefacts through Lest We Forget will create a freely-accessible online archive and preserve the memory of the wartime generation. I’m looking forward to meeting people from across the city and beyond as they bring their items telling the story of their family and the First World War.”

“Archives provide a vital link with the past and it is always amazing and gratifying to see how much it means to people when we are able to reveal the stories behind their precious family mementoes. Thanks to the funding of the Heritage Lottery Fund we are able to preserve our First World War heritage for current and future generations by digitising these objects through Lest We Forget: Keep Their Stories Alive. We hope this event inspires the local community across Plymouth and Devon to learn more about their First World War past.”