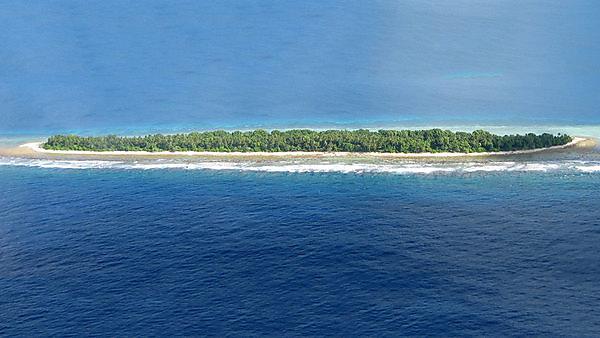 Remote island nations in the Pacific and Indian Oceans have for many years been considered extremely vulnerable to the effects of climate change and, in particular, rising sea levels.

Many have gone so far to predict they could even be completely submerged within the next century as sea level rises, forcing their populations to flee and become among the first climate refugees.

However, new research by the University of Plymouth and University of Auckland is seeking to demonstrate that islands formed on coral reefs are in fact more resilient than has perhaps been suggested in the past.

It is seeking to support previous field studies conducted by scientists in Auckland, which have shown that rather than being submerged by sea water, the islands may adapt with the sand and gravel around their coastlines shifting to form a new and higher barrier against the rising sea level.

Coral reef islands are low-lying islands that sit on top of coral reef surfaces and provide the only habitable land in mid-ocean atolls.

Professor Paul Kench, Head of the School of Environment at the University of Auckland, has spent more than two decades monitoring environmental changes to islands and atolls in the Pacific and Indian Oceans. He said:

“Over recent decades, it has become a commonly held belief that nations such as the Maldives, Chagos or Marshall islands are simply going to vanish as sea levels rise. But our research would suggest it is in fact a commonly held misconception, and what we actually believe will happen is that as sand and gravel shift it will form a natural barrier against the sea. This is the first time we have been able to test that theory in a laboratory facility, and by replicating the conditions these remote nations face we hope to demonstrate the resilience of the islands but also enable them to appropriately prepare for the future challenges they may face.”

The research collaboration has been made possible with funding from the Royal Society of New Zealand Catalyst Fund, and a 1:50 scale replica of a coral reef island in Tuvalu – around 3000km north of New Zealand – has been constructed in the coastal basin of Plymouth’s COAST laboratory.

The model will then be subjected to rising sea level and increased wave activity, with sensors recording data which will be correlated against previous field measurements taken over the past two decades and also with a numerical model.

Scientists hope this will provide an accurate picture of the current state of affairs, but also enable them to assess how future sea level rise will affect this and other nations.

The funding is also supporting a PhD student – Megan Tuck – whose work is being jointly supervised by academics in Auckland and Plymouth.

Gerd Masselink, Professor of Coastal Geomorphology and Lead of the Coastal Processes Research Group (CPRG) at the University of Plymouth, said:

“The work already carried out has shown that these islands do move and change, but the direction of the global debate is not allowing their populations to adapt and plan for the future using this knowledge and understanding. Through this research, we hope to accurately assess what the effect of various sea level changes might be so that we can show the spaces inhabitants will still be able to use and how much time they have to fully prepare for those changes.”

Professor Gerd Masselink, Lead of the Coastal Processes Research Group at the University of Plymouth, said:

Click on this picture to watch a video about the research