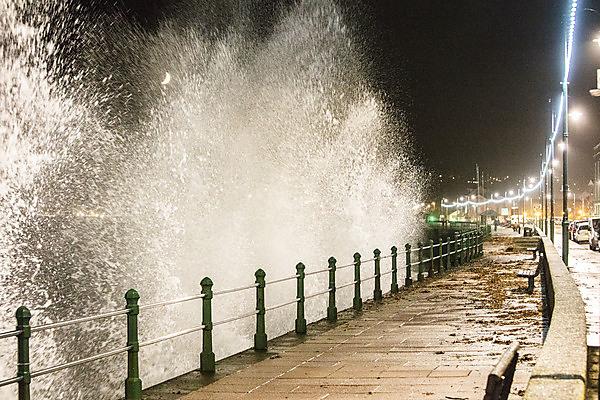 One of the greatest challenges facing coastal communities during extreme storms is to predict where, and when, coastal flooding might occur.

To overcome that, scientists from the University of Plymouth have developed a more accurate way of forecasting wave overtopping hazards around the South West.

The Operational Wave and Water Level (OWWL) model has been developed by the University’s Coastal Processes Research Group as part of the South West Partnership for Environmental and Economic Prosperity (SWEEP) project.

It takes data from the Met Office and refines it to provide a high-resolution inshore wave forecast. In addition, the model uses detailed profiles of 183 beaches around the region, which – for the first time – allows the individual characteristics of an area to be taken into account in predicting potential flooding.

The profiles look at everything from the slope of the beach, whether it is comprised of sand or gravel, and whether there are any sea defences in place.

With this information, the amount of water that is likely to overtop sea defences during a storm can be predicted up to three days ahead, creating a highly accurate picture of when and where the sea might pose a hazard to people or property.

The team behind OWWL have been working with the Environment Agency and the Met Office to refine and test the model, which has now been made available to the general public online, and through daily Twitter and email alerts.

Coastal Processes Researcher Dr Kit Stokes, one of the scientists who created OWWL, believes making the data available to the general public will help reduce the risks involved in coastal flooding incidents. He said:

“The OWWL model generates daily forecasts which grade the level of hazard posed by wave and water levels over the next three days. Green equals low hazard, while red means there is a potential hazard to pedestrians, property and even transport near the coast. We already provide this data to the Environment Agency to help inform their decision-making, but making this information available direct to the general public means more people will be aware of when it is unsafe to go near the coast, or when their property may get flooded or travel plans disrupted.”

“Coastal flooding is normally considered to be the result of high tides and storm surge, but in the South West we have an important additional factor – wave run-up. This occurs where really large waves hit coastal structures or beaches, which pushes the water up and over the structures. Having a good understanding of what the coastline looks like is crucial to being able to predict coastal flooding accurately. The OWWL model brings all the factors that causes coastal flooding together, and means forecasts are more accurate even at a really small scale.”

It is estimated coastal flooding costs £400million to the UK economy each year. Providing more accurate forecasts of when and where coastal overtopping might occur will increase preparedness for storms and also allow emergency services to focus on the areas most likely to be affected, which should reduce the social and economic costs of extreme storms.

“Good forecasting is the most cost effective way to safeguard communities at the coast and ultimately saves lives. The Operational Wave and Water Level tool developed by University of Plymouth has allowed us to trial an overtopping forecast that predicts exactly where and when water will be getting over our sea defences in South West England. This has helped us to target our response during storm events over the last two winters.”

Applying research to deliver environmental, economic and social benefits to the South West