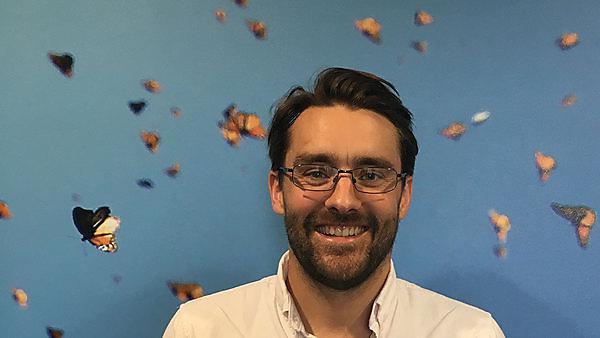 “I would advise anyone out there to just make stuff. Employers like to see people who have a passion, a capacity to learn, and someone who is willing to work hard off their own back. Nothing demonstrates that more than someone who has made something cool for no other reason than a passion for learning and getting on in life.”

After graduating I decided to go travelling again. I worked for six months doing night work on the London Underground to save money and booked a ticket to Lima, Peru. I worked my way from Peru to Mexico City (although I did chicken out of crossing the Columbia/Panama border and got a flight instead!). When I got back I joined a bunch of recruitment consultancies and one guy came up with a job opportunity with a video game publisher called Eidos (the guys who made Tomb Raider) in Wimbledon. It was a junior role as a production assistant, so ordering print runs for the video game box art, disc pressing etc. – basically a very boring job within a very cool and exciting industry.

A big lesson for me is that most opportunities come about through connections and knowing the right people. Being humble, likeable, and working hard means that people remember you and are more likely to help you along your career path in the future – even though I knew this job wasn’t for me the people I met have helped me until this day.

After 9 months I got a call from another recruiter for a job at EA (Electronic Arts). It was for an Assistant Producer within EA Partners (in all honesty, I think they probably saw Production Assistant as my current role and thought they were similar – they weren’t!). I interviewed for the role and got it. EA Partners worked with external development houses to publish games. EA make their own stuff internally (FIFA, Madden, Need For Speed) but EAP worked solely with externals. Over the next eight years I got to work as an EA Producer with some of the most exciting video game teams in the world and did a lot of travelling! I worked for two years travelling to Germany every week with Crytek on the Crysis franchise, Sweden with Starbreeze on a game called Syndicate, and even sunny Nottingham with Free Radical Games working on TimeSplitters – Future Perfect. I got to go to games conventions in LA, Germany, and Moscow, and played a lot of video games! I even used to get feedback in my appraisals saying I should play more games.

My last stint at EA was with Playfish studio, who EA had just bought. Here I learned about social games and freemium through working on The Sims Social. After Playfish I moved to Paddy Power, the gambling company. They needed someone who had worked in social games to help bring a new social gambling product to market. After two years at Paddy Power I moved to Fluxx as an innovation consultant which was amazing but I missed games. A friend from Playfish had started the King (Candy Crush guys) studio in London after Playfish was shut down. She was on the lookout for a Senior Producer to oversee a project they had in the works and I couldn’t resist the opportunity to get back into gaming. That’s where I am today!

I never really had a well-defined path. I loved video games and I knew I wanted to do something in the media but I wasn’t actively applying for video games jobs when the Eidos role came up. I would say 50 per cent of my career has been down to chance! I think most people’s careers are defined by an element of chance. The only thing you have real control over is recognising a good opportunity when it presents itself, having a good work ethic and being nice to people. People open doors for you, so be nice to them. People won’t help you if you’re a jerk who thinks the world owes them a living.

During my time at Playfish, EA got a new CEO who decided to restructure the business. Part of this was shutting down various studios including Playfish. As such, we were all made redundant. As it happens, I was already talking to Paddy Power and moved over pretty much seamlessly – but this was a difficult time. Even though you know the decision has nothing to do with your performance, being made redundant really sucks. That’s one thing I dislike about working for big companies like EA. They are very cyclical and every few years have big restructuring exercises, which usually results in parts of the business being cut. Anything in a creative field will see these cycles. Take social games: people loved everything Zynga made for a few years and lots of companies followed suit. Sooner or later users get bored and want to try something else. Everyone in the industry knows that this happens and they look after each other. When one studio gets shut down the others rally round to pick up the talented people. The key is to have a good reputation and you will always find a new job.

I really loved bringing a new game to market. After all that hard work, to see the product hit the shelves and hopefully do well was the biggest rush. Even working on social games where you’re releasing new updates every week was fun. It’s great to see real people having fun with something you have helped to create.

Traditionally, it was always a case of being willing to start at the bottom and work your way up. I would say that has changed a little bit. There are so many free tools for creating content out there at the moment that I would advise anyone out there to just make stuff. Unity and Unreal Engine are a great place to start and totally free! Employers like to see people who have a passion, a capacity to learn, and someone who is willing to work hard off their own back. Nothing demonstrates that more than someone who has made something cool for no other reason than a passion for learning and getting on in life.

I can’t stress enough my earlier point about not approaching your new career with the attitude that the world owes you a living. I know so many people under 20 who have lost out on great opportunities because they weren’t willing see the bigger picture and do things they felt were beneath them. I have met so many university graduates who feel like they should be CEO after six months in a job. Potential employers and mentors do not see a lack of skills or knowledge as a problem. Smart people can easily be taught. A bad attitude however, is not something anyone wants to take on.

When I was working with Lionhead studios as an Assistant Producer I attended a production meeting. From the Lionhead side was a guy called Jonty Barnes who basically ran the studio. He was one of their best coders and has gone on to run the studio that made Destiny on PS4. I was the most junior person in the room by far and when someone asked who was going to take the meeting minutes I reached for my pen… but before I could do that Jonty raised his hand and offered to do it. He was probably the smartest and most senior person in the room and was the guy answering all of the very difficult questions – but he offered to take notes. It seems so minor but I never forgot that and tried to have that same humility and willingness in everything I do.

Also, just make stuff. There’s no excuse not to these days!