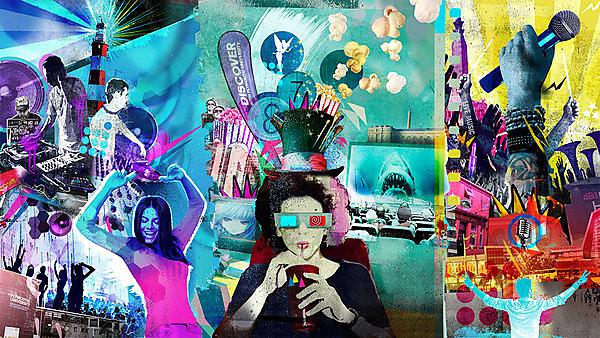 There’s a lot more to nightlife at the University of Plymouth than your average night on the town. Its wide range of societies means that whatever you’re into, you’ll find some like-minded souls to share it with. Can’t see one you like? Start your own!

UPbeat, the University of Plymouth’s DJ society, began in 2008 to give upcoming DJs a chance to show off their skills in the Students’ Union and other clubs around Plymouth. It also gave beginners a chance to learn how to DJ and share their love for all types of music. UPbeat’s DJ nights are as varied as its members’ taste.

“It started as a society for people who enjoy dance music,” says Declan Bird, President of UPbeat. “Over the years it grew, and things like DJ tutorials were introduced, so anyone could learn without any prior experience or equipment.”

The society works closely with venues across the city, such as Bang Bang, which stays open until 6.30am showcasing a variety of music, from commercial to underground; Factory, a dark, (literally) underground club with two main rooms; and The Hub, which has a warehouse vibe and hosts the society’s biggest events. UPbeat also has strong ties with some of the biggest club nights in Plymouth, like One Love, Lateral, and Garage Nation, which welcome student DJs to play at sell-out events.

“But the best nights we’ve had have all been on campus, and have included Shy FX, Cause & Affect, and Toddla T,” Declan tells us. “The nights have been really successful, everyone really enjoyed them and couldn’t wait for the next one.”

If you prefer your music live, Plymouth can offer a bit of everything from a mosh pit to a swing dance. Rock Soc started to bring together members who share a love of rock, indie and alternative music. It advertises local gigs and arranges group outings.

And, for members who are in a band themselves, the society organises its own gigs too. “We try to give our members the opportunity to perform in front of a live crowd,” says the society’s President, Ian Turner. “Many bands that started with us still

perform around the city.” You can catch student bands on campus at the SU and at bars and gig venues around town.

At the other end of the scale, the Concert Band society showcases a range of classical music, from Shostakovich to Star Wars, while the Big Band society gets together to perform jazz, swing, funk, Latin, contemporary music and more, at the Students’ Union and local bars. If you’ve never been to a ukulele open mic night, or an evening of burlesque and cabaret, then there’s a society for that at Plymouth too.

When the nights draw in, there are few things better than settling down with a film. Without even leaving campus there are two societies that cater for a variety of tastes, from lushly animated Japanese cinema to the latest Marvel blockbuster or a Disney classic.

Bethany Owen, Chair of Plymouth’s Disney Society says: “It’s a great way for people to make friends. As well as a great way to relax after lectures!” True – there aren’t many things that offer better escapism than Mary Poppins.

A night with the Disney society usually involves a film chosen by members, with plenty of popcorn. There’s also sing-alongs, nights out, themed quizzes and cinema trips. With nearly 100 members, it’s one of the most popular societies. “Members say they love being able to meet other people who share similar interests, without being judged,” says Bethany.

The OKanimé society is for lovers of animé, manga and other elements of Japanese culture. The campus arts centre in Roland Levinsky Building has a cinema that provides the perfect venue for screenings.

In summer, you can grab a blanket and a picnic and once the sun goes down enjoy outdoor screenings of classics put on by the University’s Arts Institute. Events have included a sold-out screening of Jaws at the city’s outdoor lido. Meanwhile, Plymouth Arts Centre has screened cult classic The Big Lebowski and ‘80s favourites Ghostbusters and Dirty Dancing in Royal William Yard.

Wherever your interests lie, the University offers the chance to embrace them. Whatever you choose to do, you’ll have the time of your life.