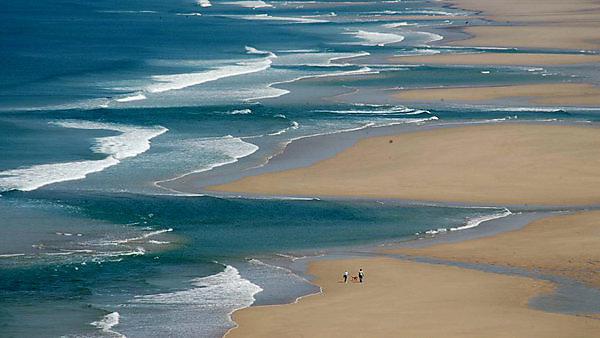 A research team from the Coastal Processess Research Group at the University of Plymouth, headed by Professor Gerd Masselink and Professor Paul Russell and supported by the Royal National Lifeboat Institution, has been awarded a NERC partnership research grant to further the understanding of macrotidal rip current dynamics and the implications of these surf zone currents for beach safety.

Nearshore cell circulation is driven by incident wave energy dissipation through the generation of cross-shore and longshore gradients in the radiation stress and the mean nearshore water level. At a qualitative level this theoretical underpinning is reasonably well understood, but in practice it remains problematic to predict exactly when, and under what morphodynamic conditions, rip currents are at their strongest and pose the largest threat to surf zone water users.

The leading hypothesis for this research project is that, regardless of the time scale under consideration (minutes to months), rip current flows are strongest when wave breaking is maximised over the bars and minimized over the rip channel. This depends critically on the hydrodynamic forcing, the tidal water level and the antecedent beach morphology - subtle changes in any of these factors may have significant repercussions for the rip circulation. Under conditions with strong rip current flows, the current is also most likely to extend beyond the surf zone, rather than developing a large eddy within the surf zone.

The overall aim of this project is to test this hypothesis through a combination of beach monitoring, field experiments and sophisticated numerical modelling. A widely-applicable predictive scheme will be developed linking wave conditions, water level and beach morphology to rip speed and hazard, and the findings will be disseminated to the RNLI to help improve lifeguarding services to save lives.

Project objectives are to:

Rip currents are traditionally known as relatively narrow, seaward-flowing currents that originate in the surf zone and extend seaward of the breaking region. They are an integral part of the nearshore circulation system comprising of onshore mass transport over the bars, longshore currents in the feeder channels and offshore flows in the rip channel.

Most rip currents are topographically constrained by bar morphology, rocky outcrops or coastal structures, but they also occur in the absence of a topographic expression when they are referred to as 'transient rips' or 'flash rips'. Flow velocities associated with cell circulation can be very significant with maximum flows in the rip neck (i.e., the narrowest section of the rip) of 1-2 m/s (MacMahan et al., 2006). Rip channels are a key component of rhythmic nearshore morphology, such as transverse/crescentic bars, and are typical of morphodynamically intermediate-type beaches (Figures 1 & 2).

Our understanding of rip current dynamics has increased significantly over the last decade due to a number of comprehensive field and laboratory experiments (reviewed by MacMahan et al., 2006). 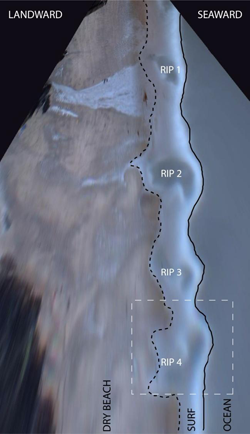 Figure 1. Rectified ARGUS video image showing 4 rip current systems from the MATRIX pilot experiment at Perranporth, Cornwall (Austin et al., 2009). The dashed and solid black lines represent the shoreline position and the seaward edge of the surf zone, respectively, and areas of wave breaking are represented by the lighest colours. The rips are separated by transverse bars and retained within the surf zone by a longshore bar. 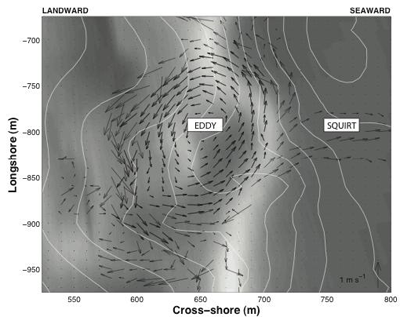 Rip currents are driven by cross-shore and longshore gradients in the radiation stress and the mean water surface, resulting from wave energy dissipation patterns associated with bar/rip morphology and wave-current interaction (Sonu, 1972). The strength and character of the rip system is temporally variable because the forcing (incident waves) and controlling factors (nearshore morphology) change over time. In addition, the tidal modulation of the location of wave breaking processes introduces a further complicating element to rip dynamics.

Rip dynamics can be considered over the following dominant time scales:

Days: Nearshore morphology is relatively constant from day to day and changes in the rip dynamics over this time scale are primarily driven by variations in the incident wave conditions (e.g., wave height, period and angle). Nearshore current velocities do not automatically increase with the incident wave energy level, however, and the response is strongly dependent on the antecedent morphology. For example, MacMahan et al. (2010) found some evidence that rip velocities on a beach with transverse bar-rip morphology were strongest under intermediate wave conditions, and weakened under both increasing and decreasing wave energy conditions.

Hours: Changes in rip dynamics over a time scale of hours occur mainly due to the tidal modulation of the wave energy dissipation over the bar morphology (Figure 2). Rip current velocities tend to be maximum when wave breaking over the bar is most intense and minimum when waves do not break over the bar (bar either dry or seaward of the surf zone). Tidal modulation of the breaker pattern can cause rip systems to be 'turned on and off' and this process may be implicated in mass rescue events, because these seem to be linked to a critical tide level (Scott et al., 2009).

Minutes: Rip current velocities may also vary over a time scale of minutes and this phenomenon is referred to as rip pulsing, and may be related to 'squirts'. The three main explanations for rip pulsing are shear waves (Reniers et al., 2007), standing infragravity waves (MacMahan et al., 2004) and wave group related variations in mass flux over nearshore bars, causing ponding of water in the trough and periodic releases through the rip channels (Brander and Short, 2001). Distinguishing conclusively between the different mechanisms of rip pulsing requires an instrument array that is even more comprehensive than proposed here; however, we will be able to measure rip pulsing as a function of wave, tide and morphological conditions, and hence assess any additional risk posed to surf zone water users.

The rip current velocity is a critical parameter in controlling offshore sediment transport, material exchange between surf zone and inner shelf, and level of risk to surf zone water users. It would be useful if rip current velocity could be estimated for different wave and morphological conditions, without the need to conduct extensive field experiments and/or sophisticated numerical modelling.

Laboratory experiments (Dronen et al., 2002; Haller et al., 2002) have shown that rip current velocity, parameterised by the Froude number (Fr), is directly correlated with the wave breaking intensity on the bar crest, parameterised by the ratio between the local wave height to water depth (H/h). Previous field studies of rip dynamics seem supportive of these scaling relationships (MacMahan et al., 2006; Austin et al., 2009), but the amount of data is limited, particularly from beaches with a significant tidal range. The ideal environment to further explore such relatively simple, but extremely useful ripscaling relationships is a beach with rip morphology that experiences a large tidal range and variable wave conditions. Hydrodynamic data collected on such a beach over a neap-spring tidal cycle will occupy a large Fr and H/h parameter space for addressing such scaling relationships.

In addition to rip current strength, the Lagrangian rip circulation pattern is also crucially important, because it controls the fate of any material or object caught in the rip. Traditionally, rips are considered to flow roughly normal to the shoreline and extend seaward of the surf zone and field experiments using dye and person floats conducted in Australia and New Zealand (Brander and Short, 2000, 2001) generally support such circulation. However, more recent field experiments on a number of US and European beaches using specialist Lagrangian GPS drifters have indicated that rip currents frequently form extensive rotational surf zone eddies, whereby the offshore flow within the rip channel returns landwards over the intertidal bar from the outer edge of the surf zone (MacMahan, 2008; Austin et al., 2009). The rotational eddy is primarily contained within the seaward limit of the surf zone with only occasional ‘squirts’ piercing the breaker line.

In fact, MacMahan et al. (2010) synthesised the results of three drifter deployments and found that, on average, only 15-20% of the drifters released in the feeder current exited the surf zone per hour. Figure 2 shows an example of such a rip circulation pattern obtained with a small number of GPS drifters deployed during the MATRIX pilot experiment on Perranporth (Austin et al., 2009). The size and intensity of the rotational eddy was dependent on tidal stage, being strongest around low water when wave breaking occurred on the bar. It was further observed that as energy levels increased above a certain threshold, the eddy diminished and longshore currents became dominant.

It is unclear under what conditions rotational surf zone eddies develop and when distinct rip currents form that extend beyond the surf zone. The implications for nearshore sediment transport, surf zone flushing and beach safety are obvious, though, and comprehensive measurements of the Eulerian and Lagrangian flow field under a range of morphodynamic conditions are expected to provide useful insights into the occurrence of these two rip circulation types.

Rip currents are an important coastal phenomenon. Strong rip current flow velocities are the main hazard to surf zone water users. According to lifeguard records, over 68% of incidents ('rescues') on UK beaches can be attributed to rip currents (Scott et al., 2007). A similar percentage is reported from Australia and the USA. Worldwide hundreds of people drown each year due to rip currents.

Beach safety is a significant issue in regions such as the southwest of England, where the vast majority of the 10 million visitors per year frequent the beaches in the region. Beach leisure activities have expanded due to the increased popularity of water sports and the extension of the traditional summer beach usage season into the spring and autumn, placing increased pressure on lifeguarding activities.

Of particular concern are mass rescue events, when, within a few hours, upwards of 150 people per beach have required simultaneous rescue at multiple locations (> 10 beaches) due to rip currents (Scott et al., 2009). Records show that these events occur each summer when 'optimum' conditions of wave, tide and beach configuration coincide with a large beach population. Perranporth beach, one of the two study sites, has the highest occurrence of mass rescue events within the region (Figures 1 & 2).

The importance of rip currents for worldwide beach safety is well recognised by coastal scientists and lifeguards, but their dynamics remain poorly understood, especially in large tidal environments where they display a pronounced variability in current intensity depending on the tide level (Austin et al., 2009). This project, Dynamics of Rip currents and Implications for Beach Safety (DRIBS), aims to increase our quantitative understanding of rip current dynamics and associated beach hazards on beaches with a large tidal range through analysis of field data and numerical modelling.

Crucially, the research will be carried out in collaboration with the RNLI to ensure relevant information and tools are disseminated appropriately to the end users (lifeguard managers, lifeguards and the general public). This project is relevant to the RNLI, but also matches a key objective of the Department of the Environment and Rural Affairs (DEFRA) in their recently published 'High Level Marine Objectives', which emphasises the need to create a safe marine environment by eliminating and/or educating about coastal hazards.