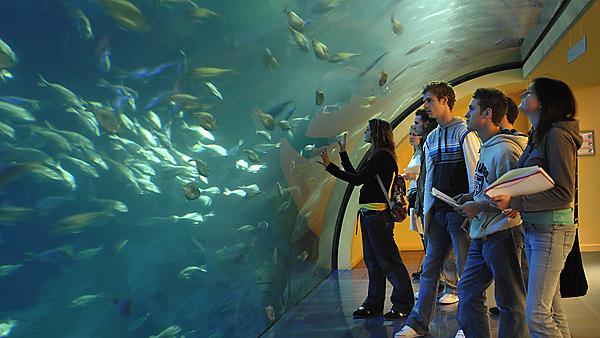 A consortium involving the University of Plymouth has been awarded funding to raise awareness of the future of our seas and ways the public can help protect them.

The University’s Marine Institute will work alongside eight partners on BLUEPRINT, which aims to equip researchers with the capacity and skills to engage people in a nationwide conversation.

The organisations will consolidate their learning, expertise and training into a 'blueprint' for how to build consortia, build capacity and create innovative activities in public engagement.

BLUEPRINT is one of six projects awarded a total of £500,000 by the Natural Environment Research Council, with the collective goal of equipping the environmental research sector to deliver effective, national-scale public engagement with contemporary issues of environmental science.

The Marine Institute already connects the public and businesses with the University’s world-leading experts and state-of-the-art facilities, through a range of events and engagement opportunities.

"We are very excited to be part of this project showcasing some of the vital marine science going on in Plymouth and across the country. Our aim is to give researchers the skills and resources to engage audiences in lively, two-way conversations on the hot topics in environmental science. We want to break down barriers between scientist and public, engaging people with complex, contemporary environmental issues.”

The six projects have been funded through NERC’s Engaging Environments programme, which follows a pilot funding call that was held late 2016. The programme aims to build a long-term, effective and innovative public engagement community.

Starting now, these Stage 1 projects will last 12 months and will be invited to bid in Stage 2 to lead one longer-term project. This will deliver a much larger scale of public engagement than NERC has supported previously, achieving demonstrable impact across the UK and national recognition.

“Engaging Environments’ is a huge step towards achieving NERC’s ambitious, long-term goals for public engagement with environmental research. We are delighted to be funding such a range of innovative programmes and look forward to seeing these build bigger, better and more meaningful engagement in the enormous range of environmental topics that affect our daily lives.”