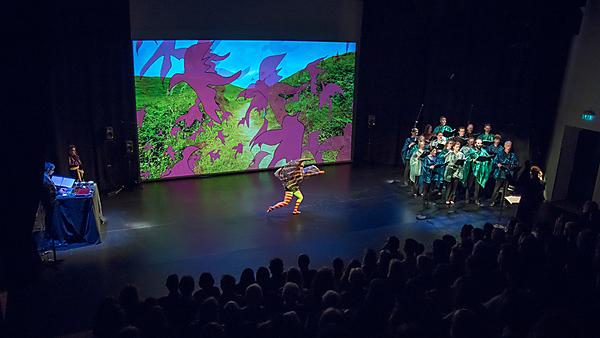 A ground-breaking opera composed and recorded at the University will reach a national audience when it is broadcast on BBC Radio 3 this weekend.

Lampedusa by Professor Eduardo Miranda will be the main element of the station’s New Music Show at 10pm on Saturday 5 October, alongside an interview between Professor Miranda and host Kate Molleson.

The opera, a prequel to Shakespeare’s The Tempest, was recorded live at the Plymouth Contemporary Music Festival in February this year, where it was performed by the BBC Singers.

The work is grounded in research carried out at the University’s Interdisciplinary Centre for Computer Music Research (ICCMR), which focuses on exploring the boundary between science and creativity.

This is a recognition that the work we develop at the University of Plymouth is innovative and of the highest standards. As well as the composition itself, everything else was done in-house, from stage design and direction, to costumes and production.

"The opera puts into practice the outcomes of various strands of research we develop at ICCMR, ranging from understanding the relationship between music and language, to using computer algorithms to create music."

Lampedusa was born during a research residency Professor Miranda undertook at MIT Media Lab in Cambridge, Massachusetts, where he developed a blueprint for a computer system to convert particle collision data from the Large Hadron Collider into music.

As a result, the opera is made up of synthesised sounds and notes that mirror the collisions and movements of some of the smallest yet most energetic particles ever created – the building blocks of matter generated inside CERN’s 7,000-tonne ATLAS detector.

Lampedusa also features a libretto written in Vōv – a language created by Hollywood ‘conlanger’ David J Peterson. Peterson is responsible for the Game of Thrones tongues Dothraki and High Valyrian and many others developed for the big and small screen. Vōv was created exclusively for Professor Miranda, the fruit of a collaboration between the scientist-composer and Peterson going back to 2016.

“The response from the audience was astonishing, and the performance by the BBC Singers was sold out – which shows that Plymouth does have an audience for adventurous classical music.

“We are following this up with a new series of contemporary and experimental music to continue showcasing the fantastic academic and creative work that we develop here.”

April will see the first in a brand new ICCMR Musical Research Concert series taking place at the University. The concert will present the results of a project using technology and composition to help injured or ill former musicians reconnect with the joy of playing.