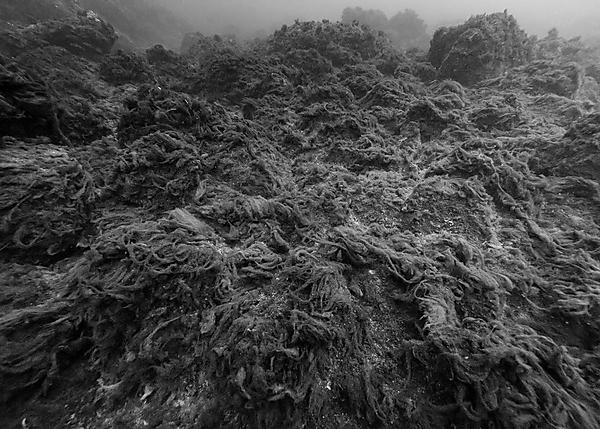 New research from an international team of scientists has shown that when ocean warming and acidification combine, complex coastal habitats can be stripped of their variety and reduced to slime-covered barren grounds.

Across Japan, the team has found widespread evidence of ‘isoyake’ – or ‘burnt seashore’ – with the disappearance of kelp forests and abalone fisheries as temperate coastal marine ecosystems lose biodiversity and become more ‘simple’.

In two studies published in Global Change Biology today, the team from the University, with counterparts in Japan, Italy, France and Spain, used the volcanic islands of Shikine-jima, approximately 160 kilometres south of Tōkyō, and Vulcano Island, off the coast of Italy, as living laboratories to analyse the impact of rising pH levels and temperatures.

“Kelp forests are being lost globally as a result of warmer sea surface temperatures and heatwaves,”

“In Japan, this ‘isoyake’, or ‘burnt seashore’, is widespread. As ocean temperatures continue to increase, warm water corals are shifting northward into temperate reefs and could replace cold-water species.”

“At present, temperate waters are changing, becoming ‘tropicalized’ and dominated by warm water species of corals, fish and seaweeds,”

added corresponding author Professor Jason Hall-Spencer, of the School of Biological and Marine Sciences at Plymouth.

“But another effect of increasing greenhouse gas emissions – ocean acidification – complicates matters. Acidification reduces the amount of carbonate in the ocean, which is needed by reef-building corals to create their structure. Decreases in carbonate ion concentrations limits the poleward spread of corals.”

The team found that with both ocean warming and acidification scenarios, there was a loss of kelp forest but no gain in tropical species. Instead, the seabed was degraded into a simple turf-algal habitat.

“Warmer waters facilitate the growth and colonization of reef-building corals,”

“But ocean acidification appears to negate these benefits. And kelp transplants did not survive in warmer waters, largely because they were eaten by warm water fishes.”

“We show a decrease in the diversity of coralline algae with increasing acidification with more than half of the species lost in high carbon dioxide conditions,”

“We found a substantial diversity of coralline algae and many of these disappear with ocean acidification.”

Professor Hall-Spencer said that global action is required to address the risk:

“Temperate coastal waters are facing major degradation of seascapes due to the unseen hand of rising CO2 levels. Overall, our results highlight the urgent need for control of carbon emissions and a limit to the drivers of ocean change,”

Investigating the impacts of ocean stressors

Jason’s pioneering technique of using underwater volcanic areas high in CO2 as natural analogues for future climate change has become a sector standard, adopted in the Pacific, Caribbean and Europe. His research, based largely in coastal waters of the Mediterranean and Asia, has found evidence that high CO2 waters can weaken the skeletons of marine life, reducing marine biodiversity as a result. He has demonstrated how ocean acidification affects fish reproduction and how molluscs adapt and respond to these conditions, sacrificing their shell growth as a trade-off for survival.

Before working on volcanic seeps, he was awarded a prestigious Royal Society University Research Fellowship in 2003 to study deep-water corals. His research in this area has featured discovering deep-water reefs in UK waters and being one of the first to see pristine reefs in the Arctic basin, gathering critical evidence that led to protection of both environments.

The time is ripe for a ‘Paris Agreement for the oceans’, with the specific target to minimise and address the impacts of ocean acidification, including through enhanced scientific cooperation at all levels. Read more about ocean acidification

Jason has also collaborated with Dr Kate Crawfurd to design an Ocean Organ with the aim to help visualise the effects of carbon dioxide on the oceans. Watch the Ocean Organ in action.

A hotbed for invasive species

Jason and his collaborators on RELIONMED are researching methods of tackling invasive lionfish that, due to the widening of the Suez Canal and rising sea temperatures, have populated the Mediterranean and disrupted the local ecosystem. Funded by €1.7 million from the EU Life Programme, the project is coordinating activities including early surveillance and detection and a removal response strategy, plus working with local communities on how they may be able to turn the invasion into opportunities for new markets.

A full professor at the University of Tsukuba, Jason works on the biological effects of rising CO2 levels. He is also an Adjunct Professor at Xiamen University (China) and one of two Principal Investigators on a US$ 400K grant investigating plankton dynamics in a warming acidifies and nutrient-rich coasts.