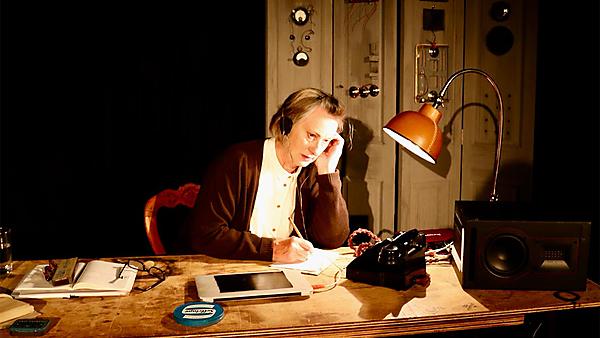 What is The Secret Listener?

The Secret Listener by Ruth Mitchell combines immersive technology with the power of theatre to create an unforgettable experience which wraps the audience in the world of a volunteer interceptor during World War Two. Through the use of the South West Creative Technology Network’s Immersive Development Grant and audio assistance from Derek Frood, Phil Innes and Ed Joblin, Ruth Mitchell has created an ambisonic, immersive experience unlike any other.

It was while researching a hidden Jewish cemetery, for a separate project, that Ruth came across the book, ‘Jews of North Devon during World War Two’ by Helen Fry. This was the book that began Ruth’s latest project researching Olive Myler, a voluntary interceptor during World War Two, with an unexpectedly ambiguous story. Olive was featured on one single page in the book. However, Ruth was so taken with her narrative and its abundance of open-ended questions regarding Olive’s identity, that she began the research which eventually led to The Secret Listener.

“I am asking the audience to listen more than they normally would. Just the sound of a notification, we are aware of, but these sounds that Olive Myler was listening out for were possibly not sounds that we would normally listen into. What I wanted to get across is that Olive had to report any sound she heard, anything at all, which suddenly makes you listen so much more attentively.” – Ruth Mitchell, Theatre Maker.

Through her research, Ruth is shining a much-deserved light on just one instrument in a cataclysmic orchestra of hidden heroes of World War Two, and this is just the beginning. The performance is not only a means of sharing Olive’s story; Ruth is also hoping that through performing The Secret Listener in a variety of venues, including Plymouth Community Homes and the Theatre Royal, she may inspire more people to come forward with stories about voluntary interceptors during the war.

By breaking away from the traditional setting of a theatre, Ruth hopes to be able to share these important stories and the immersive experience, with those who may struggle with attending the theatre.

“We began by going to the National Radio Centre in Bletchley Park and they have identified about 900 of 1500 volunteer interceptors. So, there is still quite a few to find. Through them, we got in contact with three gentlemen, who are now in their nineties, who were working as volunteer interceptors during the war. I think as we go forward, we’ll hear from more and more people. It’s a bit like chipping away at dinosaur bones, you only find a little bit at a time.” – Ruth Mitchell, Theatre Maker. 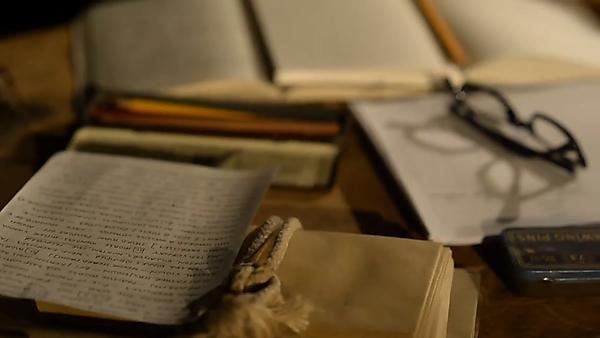 The Immersive Development Grant and Ruth’s Plans for the Future

From her project, which has been partially funded by the South West Creative Technology Network’s (SWCTN) Immersion Development Grant, facilitated by The Bridge with The University of Plymouth, Ruth hopes to evolve the performance into a national tour and a podcast which will include more people’s stories.

“The grant was specifically for creating the sound; I was focused on sound and the possibilities of that for deepening the audience’s immersive experience. I don’t think I’ve fully reached the potential of what sound could do in the future. The first performances were just a pilot, I am hoping to develop it more, tour it next year but also create a podcast in which, sound design will heavily feature.” – Ruth Mitchell, Theatre Maker.

Alongside her work creating performances, Ruth also works as an Associate Lecturer for the Humanities Department at The University of Plymouth. Although the main courses Ruth teaches are BA (Hons) Acting and BA (Hons) Performance, she also teaches on a variety of different modules and is regularly asked to return to teach actor training.

It was through her connections to the University that Ruth came across the SWCTN Immersion Development Grant. The key benefit of working with academia, Ruth believes, is the opportunity to share expertise

“Shared knowledge is really important; I’ve been working for about 35 years and I don’t consider that I know it all. Every time you start a new job or project, you learn something you didn’t know – that’s the beauty of it.” – Ruth Mitchell, Theatre Maker.

Ruth is a highly skilled actor who works across traditional and autobiographical performance. Although Ruth trained at a drama school called Rosebruford in South London, she also gained a Master’s Degree in Research at The University of Plymouth.

The Secret Listener was performed at The Old Library and The Regimental Museum in Bodmin on 12 October 2019.

A £6.5 million project designed to drive the growth of the regional creative economy. The SWCTN brings together universities and industrial partners; pooling their research and innovation expertise to develop cutting-edge practices, techniques and products in creative digital technologies. Find out more about the SWCTN.