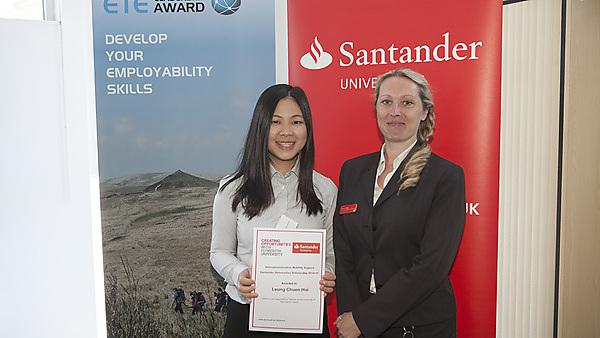 Originally from Hong Kong, Leung Chuen Hoi came to Plymouth University to complete her degree in Tourism and Hospitality Management. She decided to apply for a Santander Universities Scholarship to improve her awareness of cultures and her language skills, and the decision has led to an unforgettable experience:

‘Learning Spanish in Barcelona has been a memorable and precious experience for me. The cultural activities have enabled me to learn Spanish outside of the classrooms and I believe that by communicating with native speakers and interacting with them on a regular basis, I have really benefitted and become a more well-rounded person.’

Leung’s passion for the tourism industry was inspired by its gravitas as a sector in Hong Kong:

‘The realm of hospitality is one of the most important industries in Hong Kong. Hotels are the places in which people possess different kinds of skills and expertise. They work together as a team to provide guests with a wonderful experience.’

Leung worked as a part-time waitress in a hotel and, after two months, decided to start her studies in order to find out more about the hospitality industry.

Whilst studying at a college in Hong Kong, Leung was given the opportunity to further her experience by undertaking an internship at a hotel in China.

‘Being a cashier in a restaurant in the Sheraton Shunde Hotel was an unforgettable experience. I realised that there were many things that I could not learn from textbooks. Because of this, I’ve made it my goal to travel to different places in the world and to explore different cultures.’

Adapting to a new culture has been a difficult but fun process for Leung in the UK, and it was this desire to experience new cultures and to learn a new language which was part of her decision to then apply for a Santander Universities Scholarship.

After being awarded a scholarship to commence her travels to Barcelona in June 2014, Leung completed a Spanish summer course at the Universidad Autónoma de Barcelona (UAB).

The course allowed Leung to immerse herself within a friendly community of fellow Spanish speakers, enhance her awareness of another culture, customs, and way of life, staying with a local resident family which enabled her to practise her new language skills on a day to day basis.

After nine weeks of living in Spain, Leung is positive that the experience has enhanced her future prospects:

‘Spanish is the second most spoken language in the world. There are around 500 million people who speak Spanish. Therefore, learning Spanish will allow me to communicate with a broad base of potential customers in the tourism industry.’

‘This project has provided me with an opportunity to learn a new language and to be more independent. I believe that it has improved my competitiveness in the job market when I graduate from Plymouth University. Also, as I am a hospitality and tourism student, it is beneficial to be able to speak more than one language because customers come from different locations around the world. In fact, some customers may expect that the staff in a hotel or tourist centre can speak more than two or sometimes three languages.’

Leung recognises that the Santander Universities Scholarship has provided a fundamental basis for her to provide better customer service in the future, adding an extra selling point to her CV, and given her a positive boost for her career development in the hospitality and tourism industry.