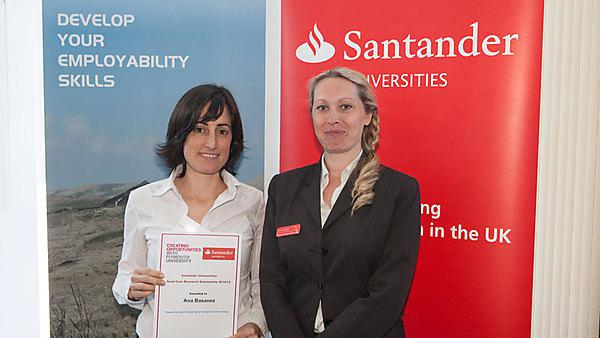 During those years Ana became interested in other uses of the marine environment, specifically in the energy sector:

"Particularly, my interest is now focused on the wave energy resource assessment. I believe that this energy is expected to be the biggest source of environmentally sustainable energy in the future."

Ana decided to apply for a Santander Universities Seed Corn Research Scholarship to undertake a research project entitled ‘Differences and similarities in the wave measurements between a SeaWhatch buoy and two Workhorse Monitor ADCPs’:

"The research project aimed to contribute to the development of the Acoustic Doppler Current Profilers (ADCP) as wave gauges. The interest for estimating wave energy by means of ADCPs is based on the fact that these devices can also estimate pressure and current parameters along the water column."

There have been other research projects completed to evaluate the accuracy of the ADCPs’ wave estimations, but the depth allocations for sampling have not been very diverse.

Mostly, the testing projects have been carried out in depths of around 7 to 15 metres because the customary assumption is that ADCPs are more reliable in shallow waters. In contrast, the numerical methods applied for estimating wave parameters are quite varied.

Ana, instead, compared the measures obtained by one buoy and two ADCPs placed at around 35 metres deep.

"Buoys, which are the traditional devices used for wave measurement, have complex mooring systems and frequently suffer damages due to shipping or vandalism, especially at nearshore areas. In contrast with this, the ADCPs bottom mounted are in safer positions and have a simpler installation system."

Ana found by deploying the ADCP at such depths that the values concerning the wave energy were reliable and that the correlation in the result with the buoy was good, particularly in those mean parameters more relevant to the wave energy assessment.

"I now hope that this project will contribute to future wave energy assessments giving tools for using ADCPs which are safer, cheaper and easier to install than buoys."

The project was the culmination of Ana’s postgraduate study at the University of Plymouth, the implementation of which provided her with technical skills which, Ana admits, will allow her to work more efficiently with a wider range of data in the future.

"I feel more confident handling data about ocean energy as well as designing and implementing sampling projects for assessing the wave energy resource."