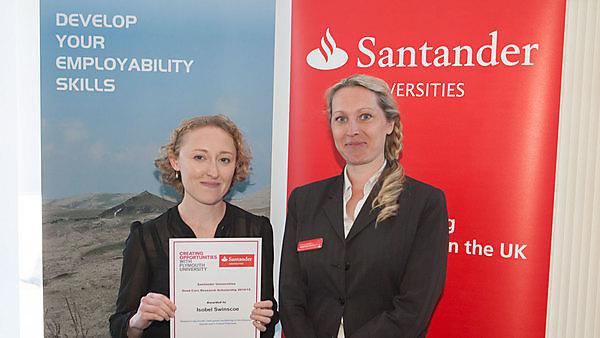 Her research particularly looked at how such environmental change would impact upon reef systems of small island developing states.

The idea behind Isobel’s thesis is that easy access to such regularly updated imagery should enable resource-poor coastal managers in developing countries to target and mitigate more effectively certain land management practices which most affect mangroves, seagrasses, and coral reefs.

Isobel’s research proposes an innovative way of harnessing ICT in a way that addresses environmental problems which threaten livelihoods in the developing world:

"Pacific island developing economies are highly dependent upon reef systems for essential goods and services; and reef based subsistence, which is vital for the rural poor, accounts for almost 70 per cent of total fisheries production in the region."

"However, anthropogenic disturbances stemming from, for example, thermal stress, coastal development, and watershed pollution, coupled with rising coastal populations, are expected to impair provision of ecosystem benefits, already reflected in depleted catches and reduced biomass, and see demand exceeding supply in the region by 2030."

Initially, Isobel wished to analyse both the Pacific reef systems of the island of Moorea, French Polynesia, which would have represented a relatively undamaged reef system and thus a control site (though experiencing growing local pressure), and the Solomon Islands where the reef is highly disturbed by multiple anthropogenic threats.

Due to logistical and practical circumstances, Isobel confined her research to Indonesia.

"Scuba diving was a necessary part of the data collection method, and because there wasn't time before leaving the UK to learn, I managed to find a couple of Plymouth graduates (dive instructors, in fact) living in Indonesia who volunteered to undertake the dive surveying for me."

Isobel instead chose a small mangrove island just off the coast of the island of Sumbawa, as her control site, which hadn’t been affected by any deforestation and associated sedimentation. It was surrounded by seagrass beds and almost 100 per cent coral cover, whereas the non-pristine site – where extensive deforestation and crop cultivation had occurred inland, and river-borne sedimentation was obvious from Google Earth images – was on the North West coastline of Sumbawa. Only a strip of mangrove forest was left here, and Isobel recorded silt-covered coral and seagrass.

Isobel used the satellite imagery which was available to detect land clearance and the specific impact on the level of sediment that therefore enters rivers (from the deforested catchments), which subsequently produces extensive plumes of suspended silt over nearshore seagrass beds and coral reefs.

Isobel assessed the magnitude of the plume, and in the field took in-water light measurements to determine if the plume was dense enough to negatively affect photosynthesising seagrass and corals.

"Through the Santander Universities Scholarship I have been able to interpret satellite data imagery which has revealed that land clearance and significant catchment sources of sediment have moved to the coast where mangroves, seagrasses, and coral reefs are located. This means that my “remote” inferences can be confirmed, which makes my results much more reliable and potentially publishable."

Isobel’s research has provided a context in which a much-needed assessment and trial of an easily accessible and cost-effective remote sensing tool, for identifying local and regional chronic and pulse disturbances on whole reef systems, can be provided to data-poor fisheries and coastal managers.

"If coastal managers are able to use free online imagery to identify the worst-offending catchments, they can target their few resources at managing (e.g. through reforestation) those specific catchment practices causing the problem, rather than constantly fire-fighting downstream."

"This research should enrich the information available to fishing communities and managers, providing a user-friendly database by which they can evaluate and modify their own fisheries management strategies. The socio-ecological changes inflicted by climate change can be added over time, from which the necessary adaptive socio-economic and environmental strategies can be enacted."