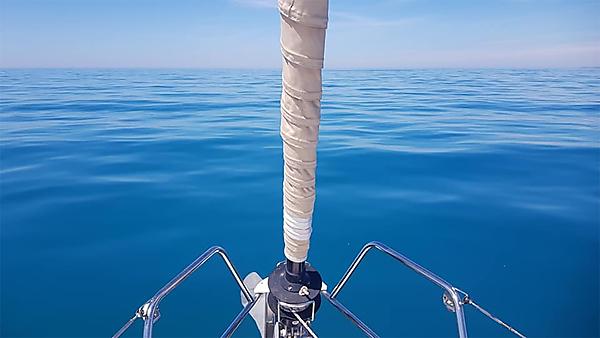 After originally being postponed due to COVID-19, this year's cetacean survey was able to take place over the summer in Cornwall.

Over four days there were exciting opportunities for BSc Marine (Hons) Biology and Coastal Ecology and BSc (Hons) Marine Biology and Oceanography students to bring lecture material to life and contribute towards a growing database about marine mammals in our local waters.

Join Louise, Bryony, Alex, Connor and Connie, whose daily blogs give us a taste of their research adventure above the waves in the South West. They were accompanied by fellow students Shauna and Saskia and lecturers Alistair McCallien – their skipper – and Dr Clare Embling. 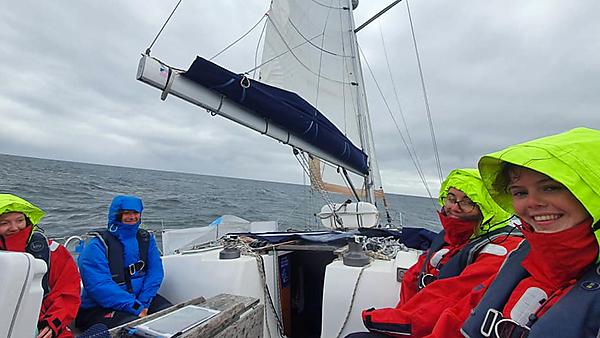 What did we discover?

We set sail on Take the Helm, a beautiful 45-foot long yacht owned by the University that we were lucky to use for the trip. The plan? Sailing along the South West of the UK, starting in Plymouth and going west, looking for cetaceans. After many COVID-19 tests and a lot of fingers crossed, we all managed to meet at 8:30 at the Marine Station, ready for the adventure to begin.

The crew for this trip? Al, Clare, Connie, Shauna, Saskia, Alex, Bryony and myself. Al was the skipper that drove the boat, helped by Connie. Our team was mainly made up of students doing their undergraduate and masters in marine biology and conservation related courses at Plymouth. Al and Clare are both lecturers and the minds behind this project. Although they have run this trip annually for five years, they felt a bit rusty because they couldn’t do it last year because of the pandemic.

The day started with a briefing on board by Al about safety and everything that could go wrong, a good test to see whether everyone was truly keen on coming (or a test to see if they could bear Al’s sense of humour). So far, so good.

Following the safety briefing, Clare gave us the protocol for the cetacean survey. On watch were two people, using binoculars on either side of the boat, telling another person about their observations. The latter, also called the person on 'data entry', used an app on a tablet to enter all the information collected about the environment, the species observed, the distance, bearing, number of individuals etc.

At around 1pm, we left Queen Anne’s Battery and set sail out of Plymouth Sound towards Fowey. As soon as we started driving, Clare put us to the challenge of guessing distances at sea, using buoys and boats as points of reference. Being able to guess distance at sea is one of the most important skills to have to survey cetaceans, as they allow us to measure species abundance over the survey area – but it definitely is one of the most difficult skills.

We started the watch, with three people at the front of the boat surveying, while the rest of the crew rested/helped with the sailing/making tea. Every hour we swapped and had different people on watch – usually with Clare, the specialist on board, helping us, and Al, from time to time, shouting from the back of the boat the name of the birds we tried to identify (or perhaps he just wanted to show off his identification skills).

We had a really lucky first day! We spotted common dolphins, porpoises, loads of gannets, herring gulls … and a minke whale! It was the first time spotting some of these species for most of us (especially the minke whale), and although Clare and Al are more used to it, they seemed to always have the same feeling of joy and amazement every time they spotted an animal.

After around six hours of sailing, we stopped and anchored outside of Charlestown. We sat outside on deck, ate snacks while dinner was cooking, having a laugh as everyone got to know each other, as the sunset began to set. The next day we needed to be up at “horrible o’clock” (Al's phrase), so an early night was needed. 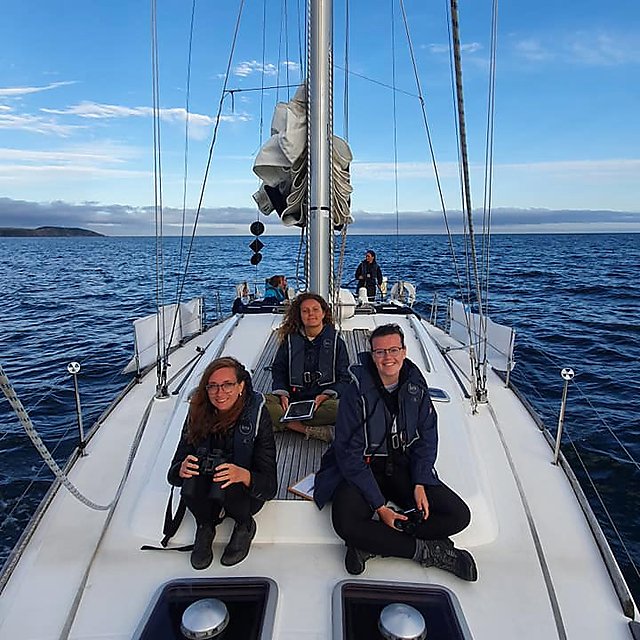 On watch: Shauna, Louise-Océane and Alex 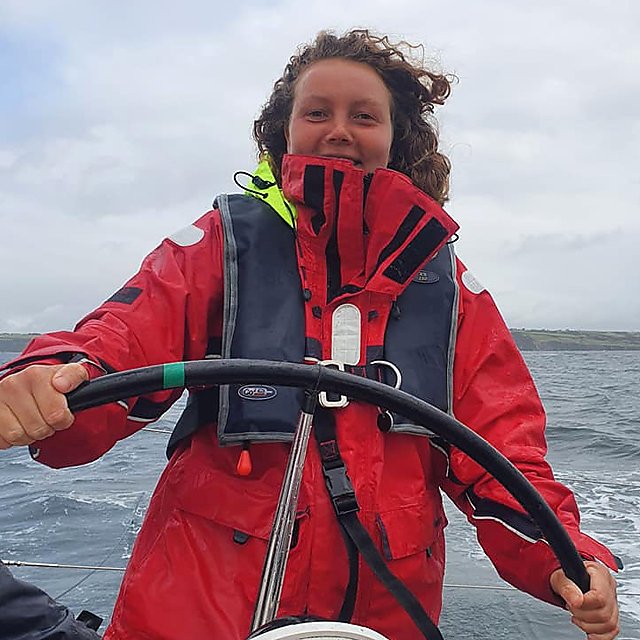 Louise-Océane getting in some helping practice 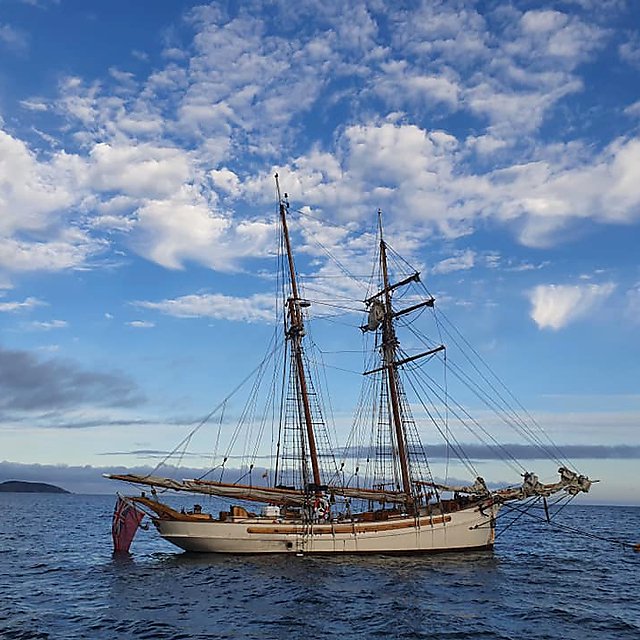 Our anchorage for the night 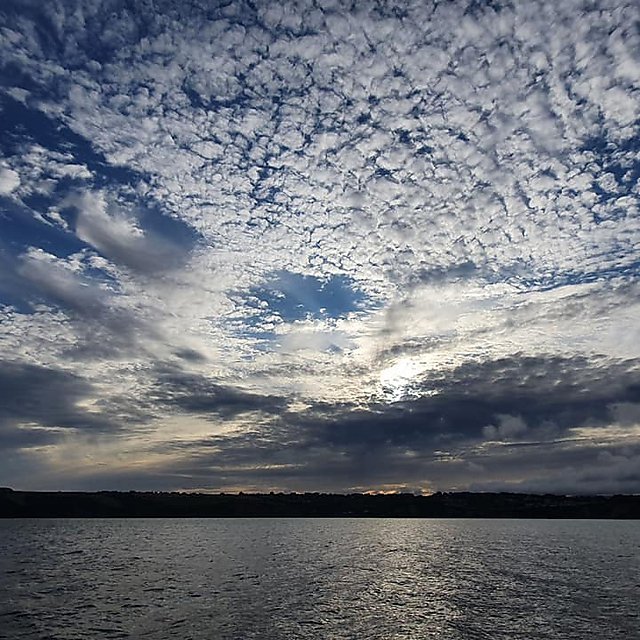 Getting dark: we heard tawny owls calling from the shore

As soon as we got to Charlestown on Saturday night, we moored and settled in. A stunning 1930’s Scooner called Anny was moored up alongside us and we were invited aboard. We hopped on Anny’s tender and climbed up her rigging onto the perfect teak deck.

Anny was a traditional fishing vessel, built in 1930. In 1970 she was rebuilt into a Scooner for a rich businessman as a luxury cruiser. The renovation was done as authentically as possible; we even got to see the original 91-year old binnacles at the helm. The skipper and first mate were so friendly; they take members of the public out for day trips. It was very inspiring; he even invited us all out for a sailing trip from Charlestown harbour when we’re next around.

We got a lift back to Take the Helm and went straight to bed, ready for an early start. At 5:30 in the morning, I popped my head out of the hatch and was greeted by a little fulmar whizzing over my head. Despite it being ridiculously early, the whole team got up and went straight up on deck (after a cuppa). We left the mooring and headed straight out to start the zig-zagging for the survey.

Alex and Saskia and myself took up our spot on the front deck with binoculars and the tablet for the data. The usual gannets and herring gulls soared over our heads, followed by a couple of common dolphin sightings.

The wind got up a lot quicker than we had expected and we all had to take cover down below or in the cockpit because of the big swell. This made it super hard to spot any dorsal fins because of all the white caps (a wave with a broken and foaming white crest) making us all think we were seeing things in a weird sort of porpoise apparition.

We carried on sailing towards Falmouth, not doing sightings under effort, just opportunistically. There were no moorings available, so we snuck down Truro River to find a nice sheltered spot. Later, we made a curry in a little inlet alongside some other blown out boats, as we looked forward to trying to make it to Penzance tomorrow despite the wind. 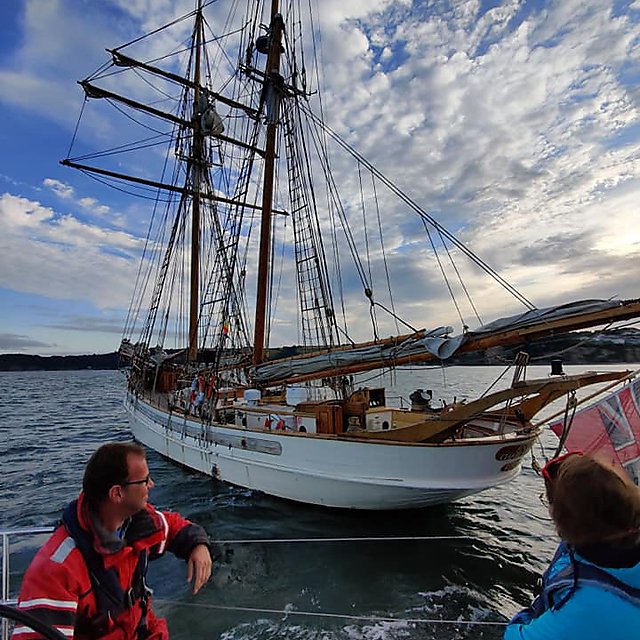 The scooner Anny of Charlestown 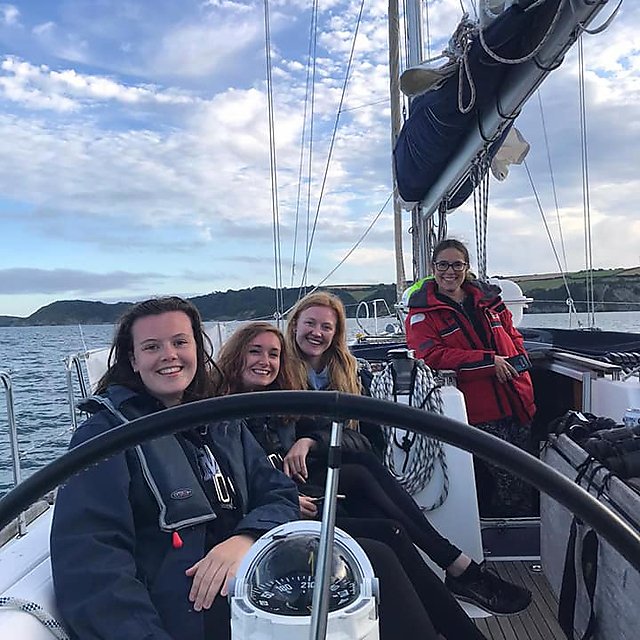 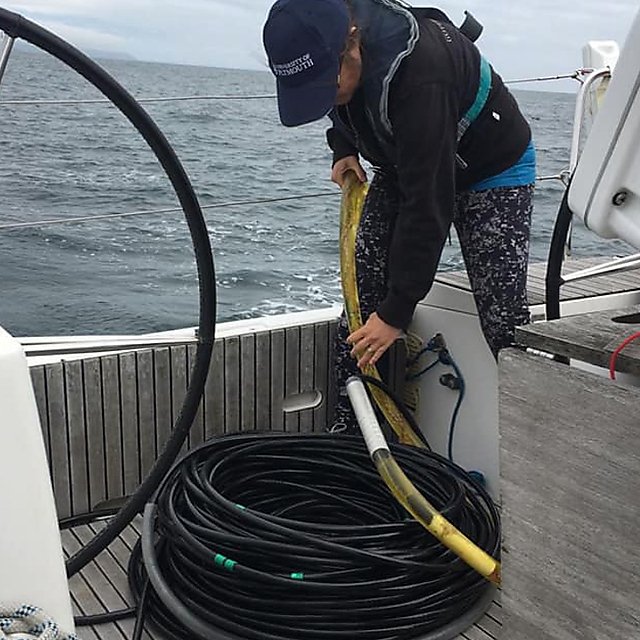 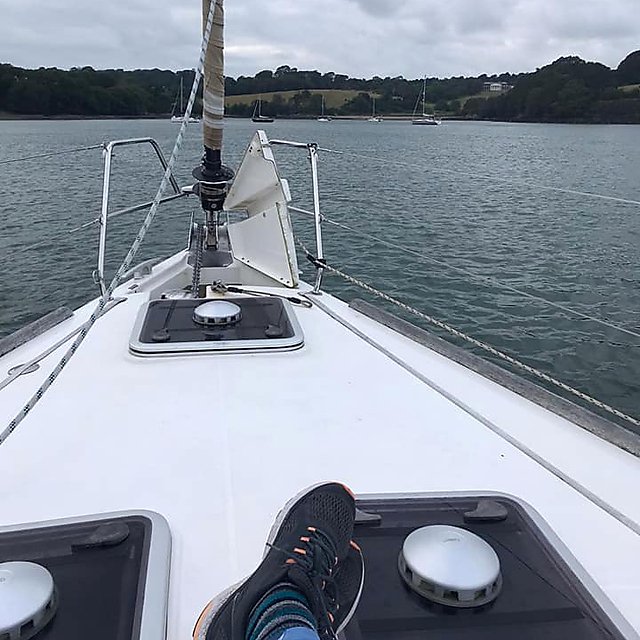 Beautiful anchorage on the river Truro

Day 3: A plunging of gannets

After a great night’s sleep and a very generous lie in (not sarcastic, we all slept great!), it became very apparent that a trip to Penzance was not destined for us; wind, tides and mooring buoys were all against us and instead we planned a trip to The Manacles.

The Manacles are a set of rocks off the Lizard Peninsula and are known to be abundant in marine wildlife. As such, it has been a Marine Conservation Zone since 2013, and is home to many red, hard, chalky seaweed beds called Maerl in the shallow water sediments, as well as a plethora of marine life including anemones, sea cucumber, sea urchins and juvenile animals.

Leaving our anchorage in Truro River at 10am, we made our way out to open sea and to The Manacles, conducting transects to observe the natural marine life. We saw a pod of common dolphins within the hour, they joined us and rode the bow waves created by the yacht, a very delightful sight to see.

With our moods having been lifted by the first sighting of the day, we began to settle into the surveys from the cockpit (as the wind was too much to be on the bow of the boat) and noticed the abundance of gannets within the hours we were at sea.

Gannets (Morus bassanus) have white bodies with black tipped wings and are distinguished by yellowish heads and the shape and way they fly. They have a wingspan of over six feet and the Northern gannets are the largest seabirds in the North Atlantic. During our three days, we have been observing gannets flying in small groups, congregating before diving into the water at speed for feeding or just cruising over the waves. The juveniles are darker and so are slightly difficult to identify but over time we all become pros at identifying the gannets. These birds can dive from a height of 30 metres and achieve speeds of up to 60mph as they hit the water like an arrow.

On our return journey to Falmouth, we spotted a company of gannets plunging into the water to feed on the fish lurking below and to our delight, we also spotted common dolphins feeding as well. Leaving this encounter with some blurry photos and smiles, we continued onwards and returned to our sheltered spot in the Truro River – the promise of a fantastic meal and a good night’s sleep awaiting us. 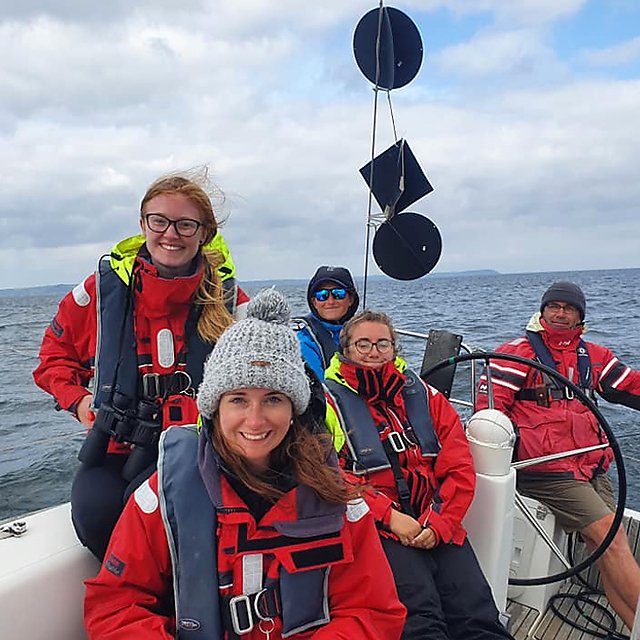 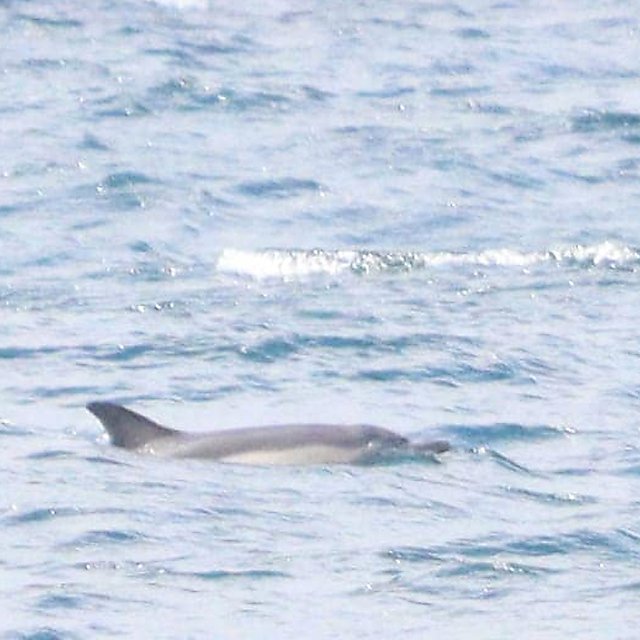 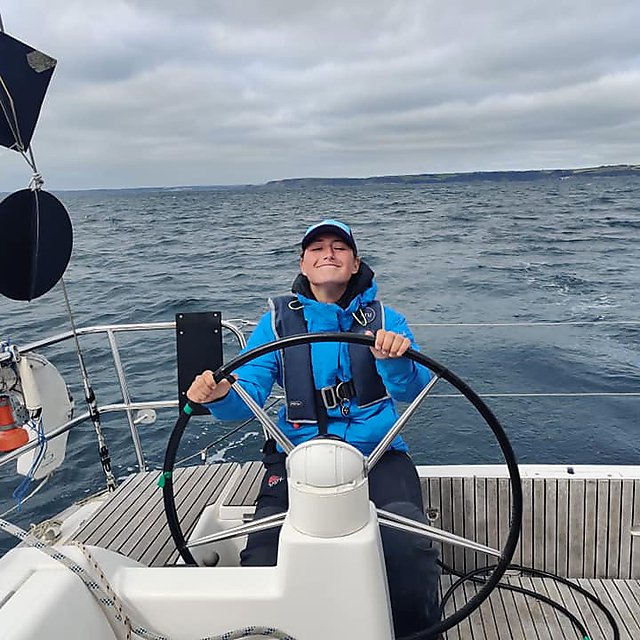 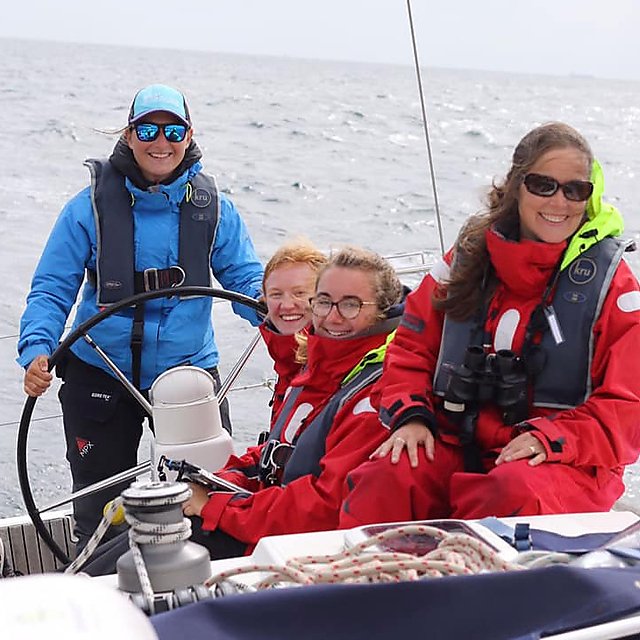 – log entry by Connie Stevens, BSc Marine Biology and Oceanography (second year). Connie is an experienced sailor and acted as first mate and a great sailing teacher for the other students

On our first day heading back east to Plymouth, we set off early in the morning, weaving down the Truro River out past Falmouth and down the stunning south Cornish coast. Almost immediately out of the mouth of the river, three harbour porpoises (including a calf) appeared giving us a great start to our day.

After our first sighting, most of the next couple of hours were filled with calm sailing and gannet spotting, with the occasional shearwater skimming the waves. As the wind started picking up, the waves started forming little white peaks and we unfurled the genoa sail a little more and started upwind towards Charlestown. We enjoyed the sight of the Fowey Yacht racing and the continuous flow of a fleet of holiday sailors.

Thinking our sightings would be limited to hundreds of gannets and the porpoise sightings earlier in the day, we were lucky enough to catch sight of a minke whale and five more porpoises, which gave us the perfect end of the day.

After this we then picked up a mooring buoy in Charlestown next to the Schooner Anny that we saw earlier in the week.

Marine vertebrate research at the University of Plymouth

Data collected by students at the University of Plymouth contributes to long-term monitoring and conservation of marine mammal and seabird populations in the southwest UK.

We know very little about the populations here off the south coast of the UK, yet it is has a high level of bycatch (where marine mammals are caught or entangled in fishing nets) resulting in the injury and deaths of many animals. It is therefore critical to understand where and when marine mammals are found so we can best conserve them.

The Take the Helm surveys contribute to this knowledge and also form the basis of a range of dissertation and masters projects (e.g. Figure 1) – Students can analyse the data they collect and contribute to their local conservation.

Fancy being on board a future voyage?

We offer three marine biology undergraduate courses, which are closely integrated and have the same entry requirements. In addition, we offer a Foundation year, which (upon successful completion) allows access to all three of our programmes. We also offer a degree in ocean science and marine conservation. 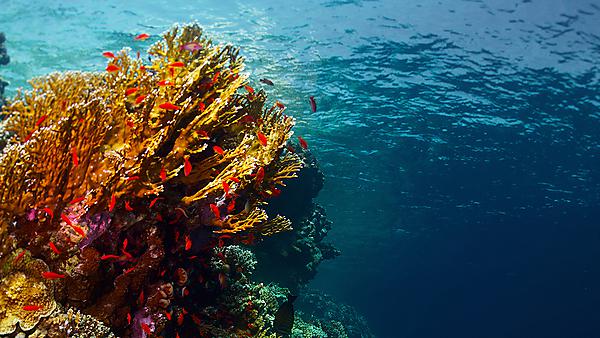